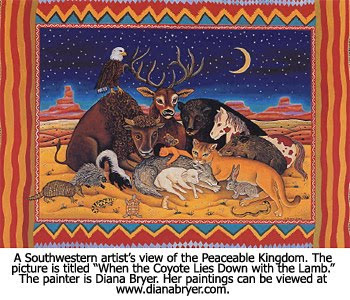 Jeremiah pictures the Millennium as a time when Israel and Judah will be united in peace, and the city of Jerusalem will be called “The Throne of the Lord” (Jeremiah 3:17-18). Jesus, “the righteous Branch,” will “reign as king and act wisely and do justice and righteousness in the land” (Jeremiah 23:5). And because of His new role as king, the name of Jesus will be changed to Yahweh-Tsidkenu, meaning, “The Lord is our righteousness” (Jeremiah 23:6).

The Jewish people will repent of the rejection of their Messiah and will enter into a new covenant with God that will be written on their hearts (Jeremiah 31:31-34 and 32:37-40). The streets of Jerusalem will be filled with “the voice of joy and the voice of gladness…” (Jeremiah 33:11).

Ezekiel confirms that the Jewish people will enter into a new covenant with God that will be written on their hearts (Ezekiel 11:19-20 and 16:60-62). He also confirms that the Lord will guarantee their security and will “execute judgments upon all who scorn them round about them” (Ezekiel 28:26). The land of Egypt will be particularly punished for its treatment of Israel and will remain a desolation during the first 40 years of the Millennium (Ezekiel 29:9-16).

Ezekiel also confirms that David will be made king of Israel (Ezekiel 34:23-24 and 37:24). The Lord will pour out “showers of blessings” on Israel, including agricultural abundance (Ezekiel 34:26-29) and the rebuilding of their Temple (Ezekiel 37:26-27). The result is that the Lord’s glory will be set among the nations (Ezekiel 39:21).

From chapter 40 through chapter 46, Ezekiel focuses on describing the Millennial Temple. It is much larger than any of the previous Jewish temples, and the Holy of Holies in the Temple contains no ark. Jeremiah had already prophesied that the ark would not be rebuilt or remembered (Jeremiah 3:16).

One of Ezekiel’s end time prophecies that has already been fulfilled relates to the Eastern Gate. He says it will be shut up and will not be reopened until the Messiah returns (Ezekiel 44:1-3). The gate was closed in the 1500’s and remains closed to this day.

Ezekiel reveals that part of the redemption of nature will be the conversion of the Dead Sea into a sea of fresh water (Ezekiel 47:8-9). He concludes his book by telling how the redeemed and greatly expanded land of Israel will be divided among the 12 tribes (Ezekiel 48).

Daniel’s end time prophecies focus on the Tribulation and the Antichrist. His first mention of the Millennium occurs in chapter 2 where he interprets the dream of Nebuchadnezzar about the sequence of Gentile empires. He reveals that the last Gentile empire will be destroyed by the return of the Messiah and the establishment of His kingdom “which will never be destroyed” (Daniel 2:44-45).

In chapter 7, Daniel emphasizes that the Redeemed will reign with the Messiah: “Then the sovereignty, the dominion, and the greatness of all the kingdoms under the whole heaven will be given to the people of the saints of the Highest One…” (Daniel 7:27). Daniel concludes his book by indicating there will be an interregnum of 75 days between the time of the Lord’s return and the establishment of His worldwide government (Daniel 12:11-12). This is most likely the period of time when the Messiah will judge all those left alive at the end of the Tribulation to determine whether or not they will enter the Millennium in the flesh. This time period will also likely be used to organize the Messiah’s government, part of which will be to make governing assignments to the Redeemed who will be in glorified bodies.

In the next part of this series on the Millennium in the Old Testament, we’ll look at prophecies from the minor prophets concerning the Millennium.