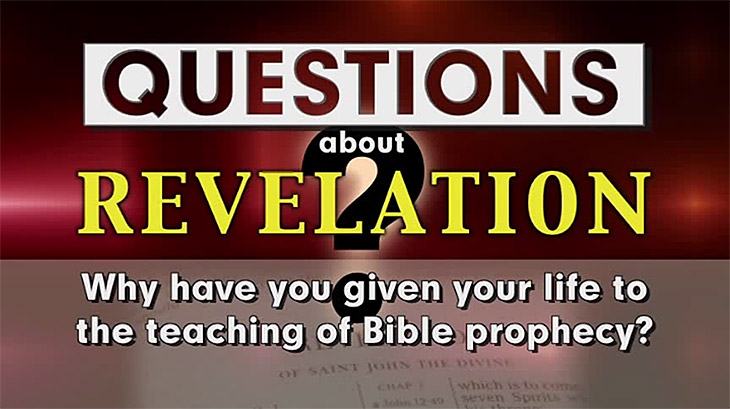 Over the next few weeks we will continue to share with you the opinions of 13 Bible prophecy experts concerning various questions related to the book of Revelation. While being interviewed, the panel had the opportunity to answer a very personal question. The responses were inspirational, encouraging and insightful. The members of our panel of Bible prophecy experts and now Dr. David Reagan were asked to address:

David Reagan, Lamb & Lion Ministries
I’d like to share my testimony as to why I have devoted my life to the teaching of Bible prophecy.

Before establishing Lamb & Lion Ministries in 1980, I spent twenty years teaching International Law and Politics at the university level. I’d grown up in a typical Amillennial church that ignored Bible prophecy, except for once a year when the pastor would deliver a message condemning Pre-Millennialism by arguing there is not one verse in the Bible that even implies Jesus will ever put His feet on this earth again.

My life was changed in 1967 during the Six Day War. When the Six Day War broke out, because I was a professor of International Law and Politics, I followed that Six Day War very carefully. I’ll never forget that when the war was over I read a very interesting news article one day that said that when the Israelis decided that they were going to take the Old City which was under the occupation of the Jordanian forces, the logical way to do it was to hit it from the West over at the Jaffa Gate, but certainly not at the Eastern Gate because all that territory was under Jordanian control. The Israelis, always relying on surprise, decided, “No, we’re going to hit from the eastern side. We’ll come around under the cover of darkness and hit from that side.” While they were discussing that they also discussed the possibility of blowing open the Eastern Gate with satchel charges and catching the Jordanians by surprise.

Then the article revealed that when that suggestion was made an Orthodox rabbi was there who said, “No, you’ll do that over my dead body, because that gate is supposed to be closed until the Messiah returns.” I had no idea what the rabbi was talking about. I had grown up in a church that did not teach Bible prophecy. I knew nothing about Bible prophecy. So, I got out a concordance and I looked up the word “gate” and I started looking at verses. Guess what? I discovered Ezekiel 44 which has a prophecy that says the Eastern Gate is going to be closed and it will not reopen until the Messiah comes.

Next, I got out the Encyclopedia Britannica and I started reading about the Eastern Gate. It said that no one knows for sure why this wall was closed, but the best story is that when these walls were being rebuilt in the 1500’s by Suleiman the Magnificent that a rumor swept Jerusalem that the Messiah was coming. Suleiman called the rabbis in and asked, “What does this mean?” They replied, “When the Messiah comes he’s going to come from the east. He is going to go through the Eastern Gate, and he’s going to run all you aliens out. He is going to become the Messiah and the ruler over the earth.” The rabbis were dismissed and the order was given: “Seal up the Eastern Gate! Put a Muslim cemetery in front of it. That will take care of the Messiah because He won’t walk in a Muslim cemetery and He can’t go through a gate that’s closed.”

That’s a special story for me because that’s what got me interested in Bible prophecy. I was hooked from that point on. I could not believe that I was seeing a prophecy fulfilled right before my very eyes at that time in the Twentieth Century. And so, I started studying Bible prophecy intently. That’s why I call the Eastern Gate the “Gate to Prophecy” as far as it concerns me personally. Well, that’s how I got interested in Bible prophecy. That’s one of the reasons we have on our television show Christ in Prophecy a reproduction of the Eastern Gate behind us.

As I began to study Bible prophecy I began to discover what’s called the “Signs of the Times.” These are signs from both the Old and New Testaments that we are told to look for that will mark the season of the Lord’s return. Those signs convince me that we are living in that season. That’s when I decided to give up my academic career and devote the rest of my life to proclaiming the soon return of Jesus.

The Bible makes it clear that no one can know the date of the Lord’s return. But, the Bible makes it equally clear that we can know the season if we know the signs to watch for. For example, consider these statements in 1 Thessalonians 5 beginning with verse 1, “Now as to the times and the epics brethren you have no need of anything to be written to you. For you, yourselves know full well that the day of the Lord will come just like a thief in the night.” That’s where we would stop reading in the church that I grew up in. The pastor would use those two verses to convince us that there was nothing that we could know about the Lord’s return.

When I started studying Bible prophecy seriously I did not stop reading there, though. I continued and I made a great discovery. Listen to verses 4-6, “But you brethren, are not in darkness.” In other words, you believers are not in darkness. “That the day should overtake you like a thief. For you are sons of light. You are sons of day. We are not of night, we are not of darkness. So then let us not sleep as others do, but let us be alert and sober.”

Jesus is coming like a thief in the night for the world. He will also surprise those Christians who do not know God’s prophetic Word. But, for those who know Bible prophecy, His return will be of no surprise because He has given us signs to watch for. They are also signs that we can understand, because we are children of light in that we have the indwelling of the Holy Spirit who will help us to understand God’s Word. Again, we cannot know the date of the Rapture of the Church, but we can definitely know the season.

We are surrounded today by signs of the times that are just literally shouting from the heavens that Jesus is coming soon. Those signs include signs of nature, signs of society, spiritual signs both positive and negative, signs of technology, world political signs, and the signs of Israel which are the most important of all.

So then, look up, be watchful, for our redemption is drawing near.

In the next part of this series on reading and understanding Revelation, our panel of experts will answer the eleventh question: “Why do you believe we’re in the season of the Lord’s return?”