Homeless Drunk Transformed Into Preacher For Christ (Part 1 of 3) 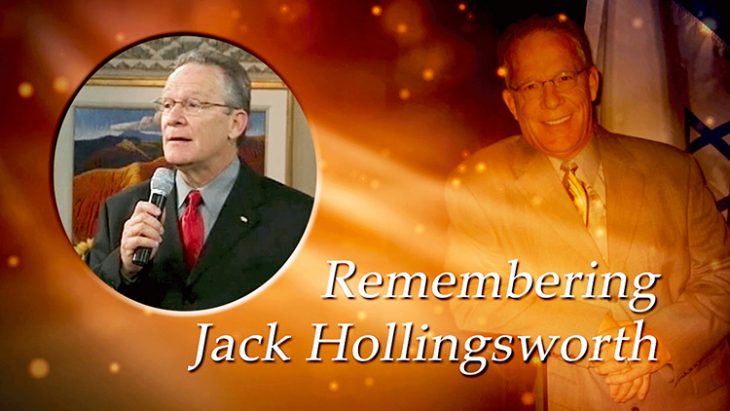 God continues today to perform mighty miracles by transforming the lives of those who have put their faith in Jesus as their Lord and Savior.

The person who has been the featured singer on our Christ in Prophecy television program since we started broadcasting in 2002 is a classic example of the miracle-working power of God. Jack Hollingsworth was a man who lived on the streets for 20 years in an alcoholic and drug haze, that is until he met the Lord Jesus Christ in 1988. His life was totally transformed by that encounter. Jack was so transformed that he became the founder of a Christian ministry called Acts 29 Ministry. He and his wife, Sally, began traveling the nation singing, teaching, preaching and counseling for Jesus.

I am sorry to report that Jack died suddenly and unexpectedly in November 2017. Jack was born in Mississippi in 1947, and he died in Florida in 2017 at the age of 70. Sally remains in hospice waiting for her home-going. It is my heartfelt response to dedicate a special tribute to their memory.

Here now is Jack Hollingsworth’s wonderful testimony, recorded in my December 2002 interview of him.

Jack Hollingsworth: I lived 20 years off and on the streets as a homeless man. I was certified insane in three states. But, praise God, I finally found Jesus and He transformed my life!

While I lived as a homeless man off and on for almost 20 years, I traveled all over the Southeast. I was a homeless man in Mississippi, Alabama, Tennessee, Florida and Texas. I so needed a radical transformation in my life.

In 1 Samuel 10, a prophet said to the young Saul, “You’re going to be changed into another man.” And when Saul turned to walk away, the passage said that it did indeed happen. When Saul turned his back to leave, God changed his heart. God granted Saul a heart transplant right then and there. And I would get one, too. I sure can identify with Saul.

Often we will see a homeless person and think that they’re a no-good bum who is too lazy to work, or they’re running away from life. The attitude can be really very negative. Well, they can actually be right and wrong in their conclusion. There are some homeless who are lazy and some who are not. And there are some who are on the run from their past and pain, just like me.

How I became homeless is a long story. I wasn’t wanted by my parents when I was born. My father died when I was only four years old. My mother remarried. My step-father was a very brutal, very violent man. He beat me so often that I spent my life in fear. I learned how to be angry very young. He filled me with hatred.

When I was 15 years old, I went out to the river with a bunch of young boys. Somebody brought some beer along. I drank some of the beer and just messed around with my friends. To my surprise, I discovered that the beer did something for me that nothing else had ever done. Beer turned me into Superman! I felt ten feet tall and bulletproof. Beer made me believe I was handsome and charming, too. With beer, my life had changed. I thought I had found the strength I was looking for.

What beer didn’t do is help me make it through school very well, though I managed somehow. After I got out of school, I also got out of my family’s home as quickly as possible. But, I discovered harshly that I wasn’t prepared to deal with life. I just couldn’t cope with it.

In order to cope with my newfound freedom, drinking and alcohol took on a big portion of my life. I started drinking more and more, but as a result, I couldn’t keep jobs. Superman just experienced losses.

Some of the people that I had counted on and believed in, well they finally had me committed to a mental hospital. Ironically, it was in that mental hospital where I found out what drugs could do. I entered depressed and angry and full of fear, but I came out psychotic. I now started mixing alcohol with drugs. My life just spiraled down from there.

I also hated God. There’d never been a time in my life that I didn’t believe in God, but I hated Him because I thought He was the One who had made me the way I was. I thought it was His fault that I’d become as bad off as I had become. I’d just shake my fist at the sky and cuss God out and I scream at Him. I blamed Him for all my problems. I hated Him for all my sins. I also despised Christians. When somebody would talk to me about Jesus, I’d either run off or cuss them out.

The reason why I behaved this way is because I felt that God didn’t love me. I was convinced of it. I just knew that He didn’t give a care about me or my predicament.

My future wife, Sally, worked as a counselor to homeless people and alcoholics. She learned from first-hand accounts that it’s very common when people are rejected real young in life to transfer their anger to God. Everybody has a story. Everybody out there on the streets is somebody’s son or daughter, or husband or wife, or friend. If they’re bad off, they commonly project the rejection they experienced onto God. The thing of it is, they believe in God. But, when they already know there’s a God, who else are they going to blame? They can’t blame the people that hurt them because often the people are no longer in their lives.

In the second part of Jack’s testimony about how he was transformed from a homeless drunk into a preacher for Christ, Jack shares about an act of mercy he received and his various suicide attempts.