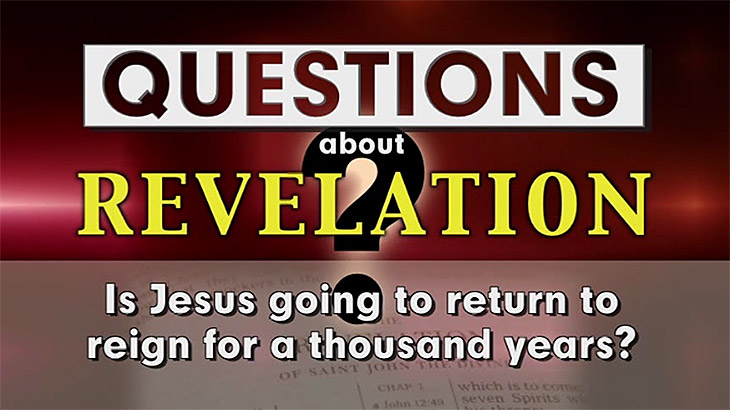 Over the next few weeks we will continue to share with you the opinions of 13 Bible prophecy experts concerning various questions related to the book of Revelation. One of the most controversial concepts concerning Bible prophecy is the belief that at the end of the Church Age and following the conclusion of the Tribulation Jesus will return to this earth to reign for a 1,000 years. The Catholic Church rejects this idea and so do the majority of Christian denominations. So, what about it? Is Jesus returning to reign or not?

The members of our panel of Bible prophecy experts will now address:

#9. Is Jesus returning to set up an actual thousand year long kingdom?

Gary Fisher, Lion of Judah Ministries
I love this question because in my background I went all over this. I was raised in a church that did not believe in the thousand year reign of Jesus. I had many sermons in my memory that said, “There is not one verse in Scripture that ever says Jesus is going to come to this earth.” And yet, in Revelation 20 it says six times, “They came to life and reigned with Jesus for a thousand years.” Six times that passage says “a thousand years.”

Now, how do we get the term Millennium? “Mille annis” is 1,000 years in the old Latin Vulgate. So, there is going to be a 1,000 year period under which Jesus reigns on this earth.

If you can’t take the Bible literally then it’s easy to allegorize that word. I have heard sermon after sermon saying, “Well, this could just be representative of 10,000 years or whatever.” If you’re going to start that we can also take liberty to believe that Creation lasted 60 billion years instead of six days! But, yes, there is going to be a thousand year reign of Jesus on the earth because the Bible says that six times in Revelation 20.

Don McGee, Crown and Sickle Ministries
Yes, I do. I believe it with all my heart. There are any number of reasons to believe this, but the most obvious reason is that it’s because the Bible says it will be so. Jesus is going to reign for a thousand years on this earth.

Another reason to believe this is that if you look at other text in the Bible, especially in the New Testament, you will see that God’s people are promised to reign during that time. Paul talked about how we will reign with God on this earth. Go back to Isaiah chapter 11. I find this interesting in light of some of the new ideas that we are seeing today. The Church is not going to produce Isaiah chapter 11. There is no way that Church is going to bring in a utopia. This idea of Dominion Theology doesn’t fit with Scriptures, probably most importantly if you go to the second Psalm and look at verse 8 you’ll see that it is God the Father who gives the Kingdom to the Son and not the Church.

When you take all of these references and put them together with what has been plainly said in Scriptures, I think the only conclusion can be that Jesus is going to rule on this earth from David’s Throne for 1,000 years.

Don Perkins, According to Prophecy Ministries
Yes, I do, because Revelation 20 is a physical prophecy of Christ’s that He must fulfill. Not only that, but Isaiah 9:6-7 from the Scriptures declares that Christ will sit on the throne of his father David. The Bible says that the authority — the seat of government — would be on His shoulders. We know when Christ came the first time He never officiated as the true king of Israel. He came into Jerusalem on a donkey, but the next few days the people rejected Him. And so, the Millennial Kingdom is a physical prophecy. I believe that Jesus will physically fulfill His kingship in it. So, therefore, I believe that Revelation 20 is a literal prophecy that Christ must fulfill.

Terry James, Rapture Ready
Yes, I do, because there are so many pertinent scriptures that pertain to the length of time in Revelation 20. Not only is there so much talked about in that chapter, but you can also find references to it throughout particularly the Old Testament.

You can find general references to an era that’s coming, particularly when Israel will be the head of all nations during that time. And, for example, there is a throne upon which David will sit as co-regent with Jesus; Jesus being the King of Kings over all the universe that is. David will be the regent over the millennial Israel. The nation Israel being reborn I think itself is the very proof that there will be a thousand year reign of Christ coming.

Daymond Duck, Prophecy Plus Ministries
I want to start out with some scriptures as proof of a thousand year reign of Christ coming. “But thou Bethlehem Ephrata, though thou be little among the thousands of Judah, yet out of thee shall He come forth unto me that is to be…” What? “…ruler in Israel.” That’s not very hard to understand. “The Lord of host shall reign…” Where? “…in Mount Zion and in Jerusalem. Behold the days come sayeth the Lord that I will raise unto David a righteous branch and a king shall reign and prosper and shall execute judgment and justice…” Where? “…in the earth. In His day Judah shall be saved and Israel shall dwell safely. And this is His name whereby He shall be called the Lord our Righteousness. And the Lord shall be King…” Where? “…over all the earth.” So, Jesus is coming back as the King of Kings and Lord of Lords, and so I do believe in a literal earthly reign of Jesus Christ.

The reign of Jesus Christ is mentioned many times in the Old Testament and the New Testament. The Old Testament never tells us how long Jesus will reign, but we know from Revelation 20 where there are six passages about how it will last for a thousand years. I believe that refers to the literal 1,000 year reign of Jesus Christ. When the Bible says something just one time we should believe it, but when it says something six times, well I think God knows that a lot of people are going to have trouble believing it. He is trying to get it through their thick skull that His Son is going to reign on this earth for a thousand years.

The rock in Nebuchadnezzar’s dream in Daniel 2 is Jesus coming back to replace the kingdoms of the earth with His kingdom, and it will fill the whole earth. So, no, we are not living in the Millennium right now. Jesus didn’t tell us to pray, “Thank you God for establishing your kingdom on earth right now.” He said, pray that it will come, “thy kingdom come, thy will be done on earth as it is in Heaven.” I therefore believe in a literal 1,000 year reign of Christ.

Jesus’ kingdom has got to be a literal kingdom that comes in the future. Because of the order of events in Revelation, Christ has to return after the Tribulation judgments. He has to defeat the Beast and the Antichrist, casting them alive into the Lake of Fire. They remain there for a thousand years. Satan is bound in the Abyss for a thousand years and he can’t get out. And then, at the end of the thousand years, Satan is released. Well, when in the world is that going to happen? If you try to say that the whole thing is spiritual, when was Satan bound spiritually? When is he released spiritually? And, what is the purpose of all of that unless there is a literal 1,000 year kingdom on earth? That kingdom is then later merged into the eternal kingdom of God in the New Heaven and the New Earth with the New Jerusalem.

So, yes, I believe Christ’s kingdom is a literal 1,000 years. God was providing that information right there as a capstone of the Scripture.

The Early Church also for the first 300 years believed that Jesus was going to come back and literally reign on the earth for 1,000 years. Even Papias, one of the Early Church Fathers who studied under the Apostle John, that is what he believed. You’d think Papias would have known what John had taught.

So, to me, the fact that the Early Church held this view and with the text just there in Revelation 20 itself, gives us I think strong evidence that Jesus is going to really reign on the earth when He comes back for a thousand years. It’s going to be that great Messianic Age, really this utopia that man has always hoped for.

August Rosado, Today in Bible Prophecy Ministries
There is no justification whatsoever to allegorize Revelation 20. I believe it is explaining a literal, physical, bodily reign of Jesus Christ on this earth. When He comes back at His Second Coming, He’s coming back to a literal earth. He is going to be reigning in a literal city which is the city of Jerusalem. And, He is also going to be reigning over literal nations on this earth. There is no justification whatsoever to spiritualize and allegorize that and say He is coming back in our hearts, or there isn’t going to be a 1,000 year Millennial Kingdom reign as the Amillennialist are teaching all over this country. There will be a physical, literal, bodily reign of Jesus Christ here on this earth. Glory to God!

In the next part of this series on reading and understanding Revelation, Dr. David Reagan and Nathan Jones will discuss more in detail the ninth question: “Is Jesus returning to set up an actual a thousand years long kingdom?”