In this fifth segment of our exploration of the Exponential Curve, we’ll consider the diving economy, proliferation of world evangelism and the rapid developments in world politics.

10) The Economy — This brings us to a man-made disaster — namely the out of control spending that has come to characterize the modern welfare state.

The exponential curve illustrated in the diagram below is leading to the destruction of our nation. 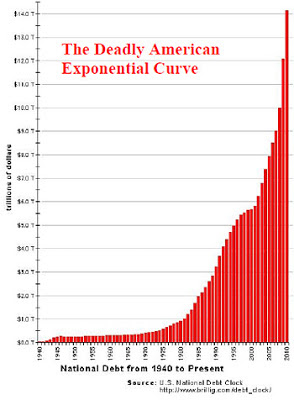 A good way of illustrating the impact of this overwhelming debt is to consider how much it represents per person in the United States. At a Tea Party Rally in 2010, a little girl about 4 years old was seen wearing a sign that read: “I’m already $38,375 in debt, and I only own a doll house!” Since that time, our individual share has increased to $51,000.20

In short, our nation is bankrupt, and our economy could collapse any minute.

11) World Evangelism — Not all the exponential curves are bad. Modern technology has made it possible for the Gospel to be preached to billions of people through the use of such media as short wave radio, motion pictures, and satellite television.

And, again, this phenomenal development is a fulfillment of Bible prophecy. Jesus Himself said: “This gospel of the kingdom shall be preached in the whole world for a witness to all the nations and then the end shall come” (Matthew 24:14).

Incidentally, those statistics are a little misleading because they leave the impression that many people still do not have a Bible in their language. The fact is that the existing translations cover over all the major languages of the world, representing more than 90% of the world’s population. The translations currently in progress are for tribal languages spoken by 100,000 or less people.

In March of 1995 Billy Graham broadcast a gospel message from Puerto Rico that was carried by 37 satellites to 185 countries and territories in a total of 117 different languages! Over 1.5 billion people viewed the program. It is estimated that more people heard that one sermon than had heard the Gospel since it was first proclaimed by the Apostle Peter 2,000 years ago!22

With regard to world mission activity, I attended a mission conference in the mid-1990s where one of the key speakers told us that 70% of all mission work in history had been done since 1900, and 70% of that since 1945, and 70% of that since 1985 — all due, of course, to the implementation of modern technology.23 The results have been overwhelming:

There were 50 thousand Evangelical Christians in Latin American in 1900.
Today: 60 million26

And, according to Muslim sources, every day 16,000 Muslims convert to Christianity, for a total of 6 million per year!27

Worldwide, the number of Christians has nearly quadrupled in the last 100 years, from about 600 million in 1910 to more than 2 billion in 2010, constituting one-third of the world’s population.28

The conversion rate is on the exponential curve:29

12) World Politics — The exponential curve also applies to world events. Habakkuk 1:5 is as relevant today as if it were written yesterday: “The Lord replied, ‘Look, and be amazed! You will be astounded at what I am about to do! For I am going to do something in your own lifetime that you will have to see to believe.'”

I took a Sabbatical in 1987 and wrote a book called Trusting God. Seven years later, in 1994, I took another Sabbatical and completely rewrote that book. The exercise gave me an opportunity to reflect back over the seven years between the two Sabbaticals. I was astounded — even overwhelmed — by the rapid and stupendous nature of world events.

Who could have dreamed in 1987 that within the next seven years any of the following events would have occurred? —

In 1987 if you had predicted any of these developments, you would have been written off as “nuts.” The rapidity of these events and their radical nature is breathtaking. They underscore the possibility of the impossible. And they certainly reveal that man is not in control.

In the sixth and last segment of our exploration of the Exponential Curve, I’ll explain how vitally important it is to understand just what the curve means to the world.

23) From notes taken by the author.

24) Charles Colson, “How Christianity is Growing Around the World,” www.cbn.com.

28) The Pew Forum, “Global Christianity: A Report on the Size and Distribution of the World’s Christian Population,” www.pewforum.org/Chritian/Global-Christianity-exec.aspx, page 1.