In this fourth segment of our exploration of the Exponential Curve, we’ll consider the terrible decline of society and marked increase in natural disasters.

8) Society — The disintegration of society has multiplied in speed as violence, wickedness and immorality have increased exponentially. Jesus prophesied this would happen when He said that end time society would be like it was in the days of Noah (Matthew 24:37-39), when violence and immorality prevailed (Genesis 6:11).

Paul prophesied about the disintegration of society in 2 Timothy 3:1-5 where he wrote that in the end times people would be lovers of self, lovers of money, and lovers of pleasure. The love of self is Humanism, and it is the religion of the world today, masquerading under many different labels. The love of money is Materialism, and money is the god of these times. The love of pleasure is Hedonism, and that is the prevalent lifestyle of today.

But God cannot be mocked or deceived. When a society makes Humanism its religion, Materialism its god, and Hedonism its lifestyle, there is always a payoff, and that is Nihilism, or despair. And thus it is no accident that we see societies around the world wallowing in despair.

I have witnessed the exponential decaying of society with my own eyes. I was born in 1938. When I was born:

I could go on and on about the many ways in which our society (and societies around the world) have decided to “call evil good and good evil” (Isaiah 5:20). But the most dramatic way I can think of to illustrate how rapid the deterioration of society has become in America is to consider the results of two polls concerning public school discipline problems, one taken in the 1940s and the other in the 1980s. Both were taken in the Fullerton, California School District. Consider the drastically different results (and weep!):

9) Natural Disasters — The Bible says that natural disasters will also be increasing exponentially in the end times, and that is exactly what is happening.

Consider these statistics for natural disasters within our nation between October 1991 and November 2004, a period of 13 years:18

And all that was before Hurricane Katrina in 2005!

Putting together all types of natural disasters worldwide, you can see on the chart below how rapidly they are increasing, from an average of 300 per year in the 1980s to almost 1,000 in 2010. 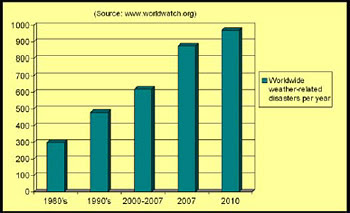 Incidentally, this is a better way of considering natural disasters, as opposed to plotting individual types of disasters. That’s because one type of natural disaster can restrain another type.

Let me illustrate what I mean. Right now (2012) our nation is experiencing its worst drought in modern history, with over 61% of our nation affected.

But one side effect of the drought is that we are experiencing the lowest number of tornadoes in 60 years. After all, you can’t have tornadoes without thunderstorms. The drought has also greatly reduced the amount of flooding.

In the fifth segment of our exploration of the Exponential Curve, we’ll look at more examples and consider the diving economy, proliferation of world evangelism and the rapid developments in world politics.