Explorations in Antiquity Center: Eating During an Enemy Siege

How did a biblical city find food during an enemy siege?

Eating During an Enemy Siege

Dr. Fleming: At the city’s gate chamber there is a light covered wall. Always found just inside the gate would be a place for a caravan to unloads its supplies. You would see a row of water mangers and food mangers near where you would unload your animals. It’s called a stable storehouse. It serves two purposes. One, it’s a stable for the caravan to stay in. Two, when you unload the animals you are needing to store your goods. The Bible calls a city like this a Store City. It’s where you’re trying to store enough supplies so if you are under enemy siege you have enough supplies to live off of. It contains water and supplies like nonperishables such as grain, olive oil, dried fruit, nuts, and other things that will last. You must have those at the gate.

On the other side of the gate would be your gatehouse. The top of the gatehouse would be a military installation, because this becomes the highest part of your city where you could shoot and throw down things onto your enemy.

Not only did they store in a stable storehouse, but we’d have two other ways of storing supplies such as a grain silo. It is cut down into the ground. It is domed over, of course, because you don’t want rain to come inside it. You’d store your grain in sacks and not as free grain because you’d need to be able to easily take the sacks out. You’d have a problem if water started seeping in, so it’s easier to get the grain by moving sacks to keep the most grain dry. New sacks of grain are brought in from the ones from your threshing floor. 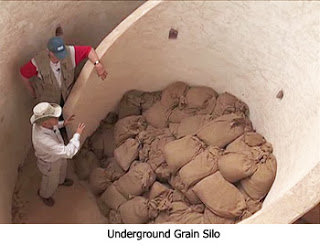 In an underground grain silo you would see niches for oil lamps on the side walls. There would be an inner wall that is plastered, then your stairway. There would actually be another stairway going out so if you are bringing in sacks the flow would be one way traffic — one going down with the other one going up. Then you go and bring more down and so on. Sometimes with kid groups coming to the museum we have them haul all of the grain to the threshing floor and have the next group take it back to the silo.

Dr. Reagan: Do you ever tell them that was women’s work back then?

Dr. Fleming: Oh, no, no we don’t. At the Center you’ll be able to see we have the sacks just filled with peat moss and not with any real grain.

What is most important here that you need to understand is if you cannot outlast an enemy siege when the enemy is coming then you’re done for.

The Israelites did not have an offensive army. They had a defensive army. The Assyrians and the Babylonians had siege equipment like battering rams. All you’d have as an ancient Hebrew was the ability to store supplies, have a wall, and hope and pray you could outlast the patience of your enemy who had besieged your town. Your storehouse, stable and silo were part of your insurance.

Dr. Fleming: Let’s look at another food storage place that is outside of the city in the terraces of the fields. If you’re a farmer, you don’t know if the city slickers are going to let you in when the enemy comes. You probably were told to pay your taxes to the city and so not to worry; they would let you in if a siege was coming. Some of your hard produced barley, wheat, and olive oil would be stored in the city for when the enemy comes.

Imagine when push comes to shove every daughter family you let in the city becomes one day less of stored food for your family, if you live in the city. How many then in the city are going to vote to keep the non-city folks out? After all, they’d reason, the outsiders are less educated. Think what will happen to your unemployment during the siege. You’ve got your own kids graduating from Megiddo University looking for a job, and so think if you are flooded with all of those folks from outside what that would do to the job market. The prophets were telling the kings, “Don’t forget the daughters of my people.” But, I’d bet they were often forgotten.

For those forced to stay outside of the city, if you are living outside the city walls, you bury some supplies because you’re not sure you are going to be allowed inside. You would camouflage the food by placing it inside huge jars. You’d take huge jars filled with grain and bury them in the field. 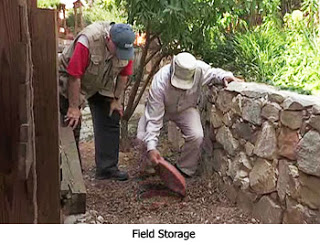 One example of hiding food in jars in the fields is from Jeremiah 41:8. The Babylonians had destroyed most of the towns and started torturing a farmer from out in the field. Under duress he says something like, “Don’t kill my family. I can show you where we have buried the field’s grain, oil and honey.”

So, these huge underground pits of stored food in various places are necessary in case the city doesn’t let you in. Sometimes by chance an archaeologist working on an excavation by a city finds one of the underground storage pits. These pithoids can be five to six feet deep sometimes. By accident a road project in Israel somewhere in the countryside can come across a lone few big pots out in a field and are filled full of carbonized grain.

I want this thought to stick with you. Just look how desperate daily life was back then. You don’t ask if the enemy is going to come. You only ask when. And so, the prophets were struggling to give the people a message to trust in God and be wise by being prepared for the enemy.

In the ninth part of this series with archaeologist Dr. James Fleming at his Explorations in Antiquity Center, we’ll glean some biblical insights by learning how in Bible times an enemy siege affected the people spiritually.