Explorations in Antiquity Center: Spiritual Impact of an Enemy Siege

For a biblical town, how did an enemy seige impact the people spiritually?

Spiritual Impact of an Enemy Siege

Dr. Fleming: Let’s say the city has let in all the unwalled folks who are going to come in. The gate has been slammed closed and now we are preparing for the Assyrians to attack. We’ve heard their distant far off drums beat and ram’s horns blowing, and we know they’re about to arrive at the city.

The prophets at this time are going to moralize the people to trust in God and be brave. The King and his army are going to mount the highest point of the gate tower and when the enemy arrives the soldiers will start slinging stones.

Worse, though, the enemy brings in huge battering rams up the slope to our city and bang it into the wall. They even have prying pointy things to start wiggling some of the rocks off from the city’s defenses. The enemy is also going to be shooting firebrand arrows flaming into the city. At the same time sappers are going to be digging tunnels trying to get under the wall.

Some of those sieges lasted two to three years long. The Bible tells us the Assyrian siege of Samaria, the capital of the northern Ten Tribes, lasted three years. Can you imagine the starvation?

Dr. Reagan: Yes, Nebuchadnezzar’s siege of Jerusalem lasted a long time, from the ninth to the eleventh year of King Zedekiah. Jeremiah even describes how he saw evidence of cannibalism with women eating their own children. 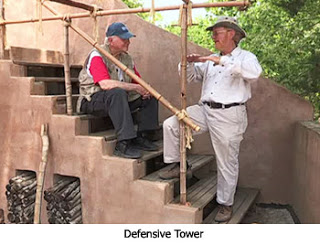 Dr. Fleming: This may sound strange, but we’ve actually found a toilet from the last couple of years from the siege of Jerusalem. Fortunately, the seat was still inseatu, meaning in its original place. Because of that, we could determine the diet and the diseases of everyone who used that toilet. The last two years of Jerusalem, meaning from the ninth to the eleventh year of King Zedekiah, or 589 to 587 BC, the diet went from field grains and fruit to the grasses growing between the rocks inside the city. Diseases were tenfold. You can imagine just how desperate the people were.

Next, the prophets of the Lord come and declare that someone can be a child of God and still have drought and still have enemies. The difference is that God will be with you during the hardships. Even if the worst thing you can think will happen to you, like captivity from your land to a foreign land, even in captivity the Lord will weep with you by the waters of Babylon where you weep, and then one day He will bring you back. One of the best verses about this theology is Isaiah 40 the last verse, “I shall run and not be weary. I shall walk and not faint. I shall mount up with wings like an eagle.” The Lord helps you through life’s darkest moments and brings you back. It’s that true hope that held them through.

The two easiest archaeological levels for us to separate on our digs before the Babylonian captivity shows idols in most of the houses. After the exile, not one idol can be found. The siege and exile caused a national repentance and spiritual renewal. The Jews came back from that national calamity without their idols. God was able to do amazing things with the people in the days of Nehemiah, Ezra and Esther. They’re now rebuilding what we call the Second Temple Period.

Hardship cleansed the exilic Jews of idolatry. Sometimes it takes a hard time before you have introspection enough to see just how much you’ve turned away from the Lord. This suffering becomes a wonderful reversal of fortune. God specializes in taking difficulties, not giving up on you, bringing you through them, and making good come out of it.

Dr. Fleming: One of the most important aspects of our work at the Explorations in Antiquity Center is for children. We have what we call the Kid’s Dig. Our digs are actually real replicas of archaeological digs. Every night our staff comes out and buries real archaeological finds, not replicas, which means we can’t let the kids keep them. Still, we want them to touch something that’s 2,000-3,000 years old. 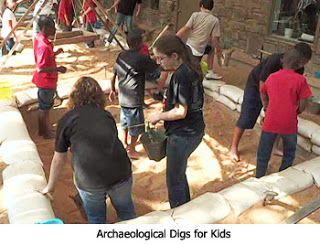 One dig area is dedicated to young preschool children and contains dinosaur bones.

The next dig is a one period site set up as a house found in an excavation in Capernaum where their courtyard was an industry for dying things purple.

Our next and third dig is of an Old Testament period site. It has an Egyptian temple from the time of the Exodus for the worship of the cow god that was destroyed by the Midianites and then rebuilt as a Midianite worship area for an invisible god. They actually found a brazen serpent in the Midianite shrine.

Finally, the last dig is more difficult, containing three different periods all stacked one on top of the other. The bottom layer contains a First Century house in Capernaum. There’s fishing equipment in it like sinkers and even part of an old net and weights. That house became a house church. The word for that is “domus ecclesia,” or a domus side house church. All the domestic pottery disappeared and it becomes only oil lamps, so you can tell it goes from a living house to people gathering to pray and sing hymns only by oil lamps. Eventually in the 50’s AD an octagonal church was built on top of that. We have mosaics and carved stones from a 5th Century church.

Getting kids excited about the past will show them that truth is not only for the future. For those of us who hail from the Judeo-Christian heritage, we look to what God has done before in making His great Word. But, if we have open eyes, we can see God’s purpose is stretching out before us as well. For my part in God’s story, I’m trying to make a place where it is easier for people to see and understand what God has done before.

In the tenth part of this series with archaeologist Dr. James Fleming at his Explorations in Antiquity Center, we’ll glean some biblical insights by learning how in Bible times the guest room was set up, particularly for the Last Supper.