Explorations in Antiquity Center: Table of the Last Supper

Can we know what the table was shaped like at the Last Supper?

Dr. Reagan: Jim, I want to talk with you about the Last Supper. As you well know, whenever Americans think of the Last Supper they always think of one thing — the magnificent painting by Leonardo Da Vinci. But, there’s some problems with that painting, right? 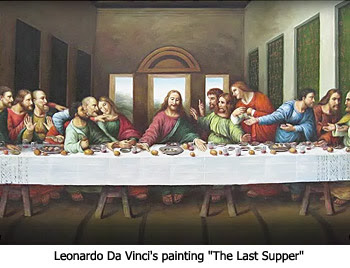 Dr. Fleming: There certainly are. As you know, Da Vinci’s “The Last Supper” is unique from his perspective and for the facial expressions, the hand movements, and so on. For example, it’s too bad that he painted daylight coming in, for the Passover is held in the evening. It occurs in the eve after sun goes down.

It’s also too bad Da Vinci painted table and chairs. The Last Supper was a reclining meal. Sure, that Jesus and the Apostles are all painted as being on one side of the table makes it easy to observe their facial expressions, but that wouldn’t be how you would have been seated at the time of Jesus.

At the Antiquity Center, one of the things we’ve tried to do here without demeaning that iconic picture is to help people better understand what the real setting may have been like.

Clues as to What Type of Table

There are four words we look to in Luke 22:11-12 for understanding the room where the Last Supper was held. Do you remember that Jesus told Peter and John to make the preparations? Well, they were to follow a man with a water pot. When they got to the doorman they were supposed to inquire of him. Jesus said that he would show them a — large, upstairs, furnished, guest — chamber. How would First Century people understand those four descriptive words? That is what we have tried to do at the Antiquity Center.

The first word is “large.” Think mega. Now, if it was a small room, you’d have a one-sided reclining table. Archaeologists have discovered such like that where food gets put on a little bench along one wall with a mat in front of it. I have a replica in our little village in the museum.

If it was a medium sized room, it would be an “L” shaped reclining table where you recline on two sides.

If the room was mega-sized, then the table was a large, three-sided, reclining table. They would have use the word “triclinium” even though it is based on a Latin word. Today in modern Israel, a couch in the living room is also called a triclinium. And so, we can deduce that the Last Supper was held at a three-sided reclining table. 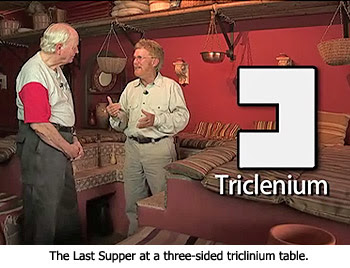 The second word is “upstairs.” The reclining table for the Last Supper is in a large room particularly located upstairs. Most downstairs rooms have to have supports to support a heavy upstairs and a roof, so larger rooms tend to be located upstairs. Jerusalem is a hill and valley city, so the upstairs often had a balcony that looked out over a lower roof. Just lovely!

The third word is “furnished.” The upstairs room is furnished actually with a table with mattresses. This can be translated as “furnished” or a “table with cushions.” In all the Gospels the Apostles are said to be reclining at the table. Modern translations might say “sat at the table” to make it modern, but the word is actually “reclined,” and so we know it was at a table with adjoining mattresses.

The fourth word is “guest.” The guest chamber is called a “kataluma.” The guest chamber is a room where a guest both eats and sleeps, meaning there is a table that also happens to be with one step down from the mattresses. If they hadn’t gone to the Garden of Gethsemane they would have slept in the room of the Last Supper. In your house you have some rooms where you eat and other rooms where you sleep, but every house that is able to afford a guest chamber or guest room in Jesus’ time had a place where your guests both eat and sleep. The Last Supper was clearly in a guest room where guests could both eat and sleep.

Because the room was a guest chamber, I have a hunch that Judas first brought the guards back to the room of the Last Supper. Remember that he left during the meal? He did probably because he thought they were going to be sleeping there. When they weren’t there, Judas must have known Jesus enough as a person of habit that there was a favorite garden where He liked to pray. Judas then may have said to the Temple guards something like, “Don’t worry. I can take you to another place where you probably can get Jesus when He’s away from the crowds.”

So, in Jesus’ day you were supposed to both eat and sleep in the guest room. Archaeologists have actually found over a thousand First Century reclining tables in the triclinium form.

In the eleventh part of this series with archaeologist Dr. James Fleming at his Explorations in Antiquity Center, we’ll glean some biblical insights by learning where at the Last Supper Jesus, John and Judas Iscariot would have sat.