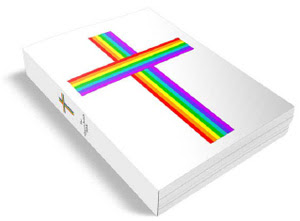 You will have to see it to believe it, and you can see it at www.queenjamesbible.com.

What I’m talking about is a new “Gay Bible” that was published in December 2012. The very people who put this abomination together have dubbed it The Queen James Bible!

The name they have given it is based on two things. First, the text of the bible is the King James Version as it existed in 1769 (why that date is never explained). Second, they argue that King James was a bisexual who had many gay lovers — hence, the Queen James Version.

This perverted “bible” is not a new translation, nor is it even a new paraphrase. Again, it is the King James Version. The only thing different about it is that those who published it simply rewrote the eight verses in the Old and New Testaments that specifically condemn homosexual behavior.

The “bible” features a rainbow colored cross on the cover — the colors that have been adopted as the symbol of the LGBT Movement (Lesbian, Gay, Bisexual, Transgender). The paperback edition currently sells on Amazon.com for $34.95.

The background of the “bible” is mysterious. No publisher is identified, nor are any editors mentioned by name. On its Amazon purchase page, the author is listed as God, and Jesus Christ is named as a “contributor.” (What blasphemy!)

The mystery continues with the press release in December 2012 that announced the new “bible.” It was signed by “Reverend J. Pearson of the Holy Innocents Episcopal Church in San Francisco.” Internet searches produce no information about such a person, and the website of the church does not list such a person on its staff.

The important thing is not what the English Bible says, but what the Hebrew and Greek texts have to say. And in both the Old and New Testaments, homosexuality is clearly mentioned in the original languages in graphic detail and is condemned. Take Leviticus 18:22 for example: “Thou shalt not lie with mankind, as with womankind: it is an abomination” (KJV).

In the New Testament, in 1 Corinthians 6:9, a list of sinners is presented who “shall not inherit the kingdom of God.” Included in this list are the “effeminate” and “abusers of themselves with mankind” (KJV). The latter phrase is translated as “homosexuals” in most modern translations (NKJV, NLT, NIV, ESV and NASV). The use of the term homosexual is entirely appropriate, for the Greek term used is arsenokoites, which according to Thayer’s Greek Lexicon means “one who lies with a male as a female.”2

The Greek word is a compound one made up of two terms: arsenos, which means male, and koitain, which means sleep with and have sexual relations with. As one expert has put it, the literal if not wooden translation of the term would be “male bedders.”3

Incredibly, the editor’s notes in the “bible” say that they originally just considered deleting the eight offending verses from the Bible! They decided against that approach because it “brushes the problem under the rug.”4 Also, they felt that people would throw Revelation 22:18-19 at them which warns against editing the Bible — even though they claim that warning applies only to the book of Revelation. So, they decided to leave the verses in, but to rewrite them. As they put it, “We wanted our Bible bullet-proof from the ones shooting bullets.”5

The “editing” they proceeded to do was right out of Alice in Wonderland. Declaring Leviticus 18:22 to be a “horribly outdated” moral code, they rewrote it to read: “Thou shalt not lie with mankind as with womankind in the temple of Molech: it is an abomination.”6 The words, “in the temple of Molech,” were simply made up and inserted in an effort to argue that the verse is talking about sex with male prostitutes in pagan temples.

The Genesis 19 story concerning the homosexuals of Sodom and Gomorrah who demanded to have sex with the men visiting Lot is converted into a story about “bullying strangers” and raping them.8 And the New Testament reference to the story in Jude 1:7 is rewritten to condemn sex with angels!9

Romans 1:26-27, which clearly condemns both lesbian and gay sex, is written off as “obtuse language.”10 These verses are then reinterpreted to refer to women defiling themselves, as with “pagan dancing” and the men “worshiping pagan idols.”11

Finally, in 1 Timothy 1:9-10 there is a list of unlawful acts. In modern English translations, verse 10 refers to “immoral men and homosexuals” (NASV). The King James refers to “whoremongers” and those who “defile themselves with mankind.” The editors of the Gay Bible changed the verse by dropping the words, “with mankind.”12

The press release announcing the publication of the “bible” concluded with these words: “You can’t choose your sexuality, but you can choose Jesus. Now you can choose a Bible too.”13

Yes, people are free to choose the Jesus of their choice. But it is only the true Jesus who saves, not the false Jesus of the Mormons or the Jehovah’s Witnesses or the editors of the Gay Bible who have selected a gay-friendly Jesus who winks at their sin.

“But Jesus never specifically condemned gay sex,” they always claim. He didn’t have to because in His teaching about sex, He made it clear that all sex outside a marriage relationship between a man and a woman is immoral and sinful (Matthew 19:4-5).

The editors of the Gay Bible have done exactly what the editors of the Jehovah’s Witnesses Bible did in 1961 when they published their New World Translation. They rewrote all the verses they disagreed with.

What will be next? The Adulterer’s Bible? The Fornicator’s Bible? Why not go all the way and just cut out all the verses that refer to sin?

“But realize this, that in the last days difficult times will come. For men will be lovers of self… unholy… haters of good… lovers of pleasure rather than lovers of God…” – 2 Timothy 3:1-4