The Great Prostitute of Revelation 17 (Updated) 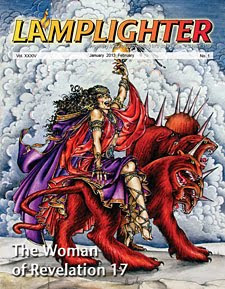 Revelation 17 lays out a wildly disturbing scene. A Bowl Judgment Angel approaches the Apostle John and says, “Come, I will show you… the Great Prostitute.”

For her physical appearance, the Great Prostitute is described as having emblazoned across her forehead a tattoo that says: “Mystery, Babylon the Great, the Mother of Prostitutes and of the Abominations of the Earth.” The woman is dressed in purple and scarlet and glitters with gold, precious stones and pearls. She holds a golden cup in her hand filled with abominable things and the filth of her adulteries.

Every month on The Christ in Prophecy Journal Blog at www.lamblion.us, we poll our readership on a topic related to Bible prophecy. In November 2008’s blog poll we asked, “Who or what is the Great Prostitute of Revelation 17?” The purpose of the question was to determine the views of people on who or what they thought the woman is who verse 5 calls a “Mystery.” The results are in the graph depicted below. 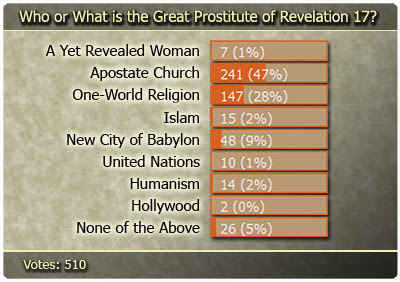 Fortunately for the readers of Revelation, the Bowl Angel goes on to explain to John what he is seeing. Unfortunately, though, the angel’s description of the Prostitute is almost as mysterious as the scene itself, giving credence to her name “Mystery.” And yet, the reader can look upon the larger structure of Bible prophecy within the Scriptures to discern who or what she is and is not.

A Woman — The Great Prostitute is not a yet unrevealed woman. For one, no individual can sit upon many waters (verse 1). Secondly, she is called a “great city that rules over the kings of the earth.” Cities in the Bible are often used to represent people groups, empires, or systems. As much as some would like to point to the pop singer Lady Gaga or a particular female politician, neither they nor any other single woman fits the bill.

UN or EU — The Great Prostitute is not the United Nations or European Union. The Beast, we are told, is the future one-world leader who is handed over power to rule what ten future leaders of the earth will control (verses 12-13). While the Antichrist and ten kings will make war against Jesus and certainly kill many of Jesus’ followers (verse 14), they hate the Great Prostitute and by God’s prompting participate in her destruction (verse 16-17). Since these political systems will give rise to the ten kings, neither can they also be the Great Prostitute because they hate and kill her.

Hollywood — The Great Prostitute is not Hollywood. While Hollywood certainly spews its licentious garbage upon mankind who thirstily drink it down, it cannot be accused of the mass murder of believers in Christ (well, at least not physically).

Babylon — The Great Prostitute will not be a newly constructed city called Babylon. Babylon was certainly a great city like verse 18 states, but it is a city cursed, never to be rebuilt. Isaiah 13:20 makes it very clear that Babylon would cease to be inhabited forever. In accordance with this prophecy, Babylon was conquered by the Medes and then it began a long decline that ultimately resulted in its abandonment to the forces of nature. By the time of Christ, one eyewitness reported that the city was nothing but “mounds and stones and ruins.” Even Saddam Hussein was unable to rebuild it into more than a paltry tourist spot. Why then is she also called “Babylon the Great?” Because Babylon has always been credited as the source of world cultic spiritual evil which will hold a dominant presence during the Tribulation.

Islam — The Great Prostitute is not Islam. Women are often used in the Scriptures to symbolize religious systems, and Islam is certainly a religious system. It has caused the bloody martyrdom of countless Christians in its 1,400 years. But, by the time of the Tribulation, Islam will be just another false religious system that will be wiped out. Islamic battles against Israel in Psalm 83 and Ezekiel 38-39 will bring about the demise of Islam as a power.

Because women are used in the Scriptures to symbolize religious systems, the Great Prostitute is indeed a religious system. The three remaining religious systems on the survey are the Apostate Church, a One-World Religion, and Humanism (which at its core is the worship of self).

Which religious system the Great Prostitute is can be interpreted by where she sits. The text says she sits in four places — on the beast (Antichrist), on seven hills, on seven kings, and across the nations and peoples of the world.

Apostate Church — The majority of voters (47%) voted for the Apostate Church. These voters could be correct based on the sitting reference in verse 9 to seven hills. Two major cities that rest upon seven hills are Rome and Istanbul (formerly Constantinople named after the Roman Emperor Constantine), and both were centers of government in the Roman Empire at different points in time. Istanbul can be discounted, though, for at the time of John’s writing Rome was the commanding city of the known world, and John would have recognized it as such. Also, Istanbul loses any future prominence due to the elimination of Islam as a world religious system, as mentioned earlier. John was clearly looking towards Rome as the city on seven hills. Rome is the heart of the revived Roman Empire, which the world today is seeing grow out of the European Union.

One-World Religion — The second largest voting bloc in the poll (28%) believe the Great Prostitute will be a one-world religion. These voters could be correct based on her sitting on the seven kings of verse 10. Five of the kings fell before John’s time, so they must have been pivotal to world rulership in relation to Israel. The sixth “one is” to John would have been Caesar. The seventh king who “has not yet come; but when he does come, he must remain for a little while” is the Antichrist, called so in 1 John 2:18. “The beast who once was, and now is not, is an eighth king” and “belongs to the seven and is going to his destruction” could only be Satan himself ruling through these seven human rulers throughout history, as there are no other kings after Jesus Christ once Jesus sets up His Millennial Kingdom. These kings extend over a time period much longer than the 2,000 years the Church has been around and cover all the world’s peoples.

Humanism — A small minority (only 2%) voted that Humanism in all its flavors such as Cultural, Modern, Religious, but particularly Secular, will be the religion of the first half of the Tribulation. I myself voted in this group for this reason — all false religion stems from man’s belief in Satan’s lie from the Garden of Eden where Satan said “you will be like God” (Genesis 3:5). All expressions of worship not towards God are flat out rebellion against the Creator. Even if we personally are not the object of our own worship, by setting ourselves up in our own religion we are worshiping self, so therefore it is Humanism.

The Old Testament is overwhelmingly filled with God’s stated hatred of spiritual harlotry. He chastised Israel again and again for running after foreign gods in rebellion. Be it an apostate form of what God truly wants, or a deviation from all norms that God has established for worship — man’s rebellion is about the worship of self.

By the midpoint of the Tribulation when Satan indwells the Antichrist, whatever flavor of humanistic self-worship the people adhere to, all will be made to cease to exist. The Antichrist, False Prophet, and the Ten Rulers will be sure to take the Great Prostitute of human-willed spiritual harlotry and the institution in which she is enshrouded and “bring her to ruin and leave her naked; they will eat her flesh and burn her with fire” (verse 16). Only one religion will be allowed to exist 3 1/2 years into the Tribulation by the Antichrist’s demonic master, and that will be the worship of Satan through his Antichrist “messiah.”