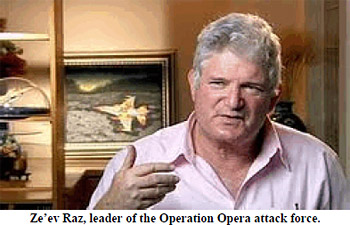 In 1976 Iraq purchase an “Osiris-class” nuclear reactor from France. The site chosen for the reactor was about 10 miles southeast of Baghdad. It was given the name of Osirak.

While both France and Iraq claimed that the Osirak reactor was for peaceful scientific research, the Israelis viewed the whole project with great suspicion. When both American and Israeli intelligence sources confirmed Iraq’s intention to use the reactor to develop nuclear weapons, the Israelis launched an intensive diplomatic effort to try to halt the French financial and scientific support for the project, but all diplomatic efforts failed.27

In early 1981 when the Israeli Cabinet received word that a shipment of 90 kilograms of enriched uranium fuel rods was expected to be supplied by France any moment, they decided to prepare for an immediate attack.28 This decision was, of course, prompted by a desire to prevent the reactor from being activated. But it was also motivated by a concern that if the attack occurred after activation, it would pose a radiation threat to the inhabitants of Baghdad.29

The mission to destroy the Osirak reactor was launched on June 7, 1981. The attack squadron consisted of eight F-16s, each with two 2,000 pound bombs, and six F-15s, which were assigned the task of providing fighter support.30

The planes flew low over Saudi Arabia to avoid radar detection. They caught the Iraqis by complete surprise and completely destroyed the reactor in an attack that took less than two minutes. All the Israeli planes returned home safely.

In a weird coincidence, King Hussein of Jordan was vacationing on his yacht in the Gulf of Aqaba at the time. Since the Israeli jets took off from the Etzion airbase in the southern Negev desert, they flew directly over the King’s yacht, and when he saw them, he immediately jumped to the conclusion that they were headed to Iraq to bomb the Osirak reactor. He called his office in Amman and asked them to send an urgent warning to Iraq, but for some unknown reason, the warning was never received by the Iraqis.31

Also, it was learned after the attack that half an hour before the Israeli planes arrived, the group of Iraqi soldiers manning the anti-aircraft defenses for the reactor had left their posts for an afternoon meal, and they had turned off their radar detectors.32

The leader of the attack force, Ze’ev Raz, was interviewed in 2007 by the Jewish Press. As he was recounting the events, the interviewer said, “The way you are describing it, it sounds like an outright miracle.” Raz responded, “Absolutely. Of course it was a miracle. How is it possible that even after we bombed the reactor not one plane tried to down us?” He then continued with an amazing observation:33

I’ll tell you something else: It takes an hour and a half to get back from Iraq to Israel and we were flying 40,000 feet above the ground.

As a result, we flew back as the sun was setting. But since the planes were traveling [so high and] at such a fast speed, the sun was out all the time and never set. It was as though it remained standing in the middle of the horizon.

At that time we pilots all radioed each other reciting the same exact biblical verse — Joshua 10:12: “Sun, stand still over Gibeon, and moon, over the Valley of Ayalon.”

In the seventh and last segment of this series on the resurgence of the Israeli military as a sign of the end times, we will look at the powerful promises God has made to Israel.

28) Moshe Fuksman-Sha’al, Israel’s Strike Against the Iraqi Nuclear Reactor 7 June, 1981 — a Collection of Articles and Lectures, (Jerusalem: Menachem Begin Heritage Center, 2003 edition). From the chapter by Rafael Eitan entitled, “The Raid on the Reactor from the Point of View of the Chief of Staff.”