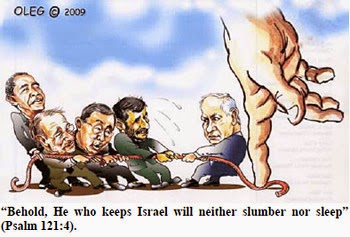 The prophecies concerning the resurgence of the Israeli military were fulfilled in the 20th Century and continue to be fulfilled to this day. The prophet Ezekiel referred to the revival of Israel in the last days as producing “an exceedingly great army” (Ezekiel 37:10). Zechariah was more specific. He prophesied that God would make “the clans of Judah like a firepot among pieces of wood and a flaming torch among sheaves,” enabling them to “consume on the right hand and on the left” all their enemies (Zechariah 12:6). He proceeded to state that in the end times, the nation will be so strong that the “feeble among them in that day will be like David, and the house of David will be like God, like the angel of the Lord before them” (Zechariah 12:8).

I am convinced that the examples cited in previous segments prove beyond a doubt that God has His hand on Israel, protecting the Jewish people from assault after assault, and enabling them to achieve miraculous victories — all in fulfillment of Bible prophecies about Israel in the end times.

Nor can there be any doubt that God’s supernatural protection will continue for the immediate future.

Currently, a major war looms over the Middle East as Arab secular leaders are being replaced by Muslim fundamentalists who are determined to “liberate” Jerusalem and annihilate Israel. It could well prove to be the worst of all the wars Israel has experienced because missiles are going to rain down on the nation from all directions.

But if Psalm 83 is a prophecy about this war, as I think it could well be, then Israel will once again be overwhelmingly victorious, defeating all the Arab nations with whom it shares a common border. This will pave the way for the subsequent war of Gog and Magog, described in Ezekiel 38 and 39, when Russia, accompanied by certain Muslim nations, will come down against Israel and will suffer supernatural destruction at the hands of the Lord.

Israel has some very difficult days ahead, but God has made some wonderful promises to them that they can rely on. In Psalm 121:4 He says, “Behold, He who keeps Israel will neither slumber nor sleep.” In Isaiah 54:17 He promises, “No weapon formed against you shall prosper.” And in Joel 3:2 He states that He will severely judge all nations in the end times who get involved in trying to divide up “My land.”

Another of God’s powerful promises to Israel is found in Isaiah 41:8-16 which reads as follows:

8) “But you, Israel, My servant,
Jacob whom I have chosen,
Descendant of Abraham My friend,

9) You whom I have taken from the ends of the earth,
And called from its remotest parts
And said to you, ‘You are My servant,
I have chosen you and not rejected you.

10) ‘Do not fear, for I am with you;
Do not anxiously look about you, for I am your God.
I will strengthen you, surely I will help you,
Surely I will uphold you with My righteous right hand.’

11) “Behold, all those who are angered at you will be shamed and dishonored;
Those who contend with you will be as nothing and will perish.

12) “You will seek those who quarrel with you, but will not find them,
Those who war with you will be as nothing and non-existent.

14) “Do not fear, you worm Jacob, you men of Israel;
I will help you,” declares the LORD,
“and your Redeemer is the Holy One of Israel.

15) “Behold, I have made you a new, sharp threshing sledge with double edges;
You will thresh the mountains and pulverize them, And will make the hills like chaff.

16) “You will winnow them, and the wind will carry them away,
And the storm will scatter them;
But you will rejoice in the LORD,
You will glory in the Holy One of Israel.”

Our nation needs to pay attention to these promises of God. In recent years, we have put enormous pressure on Israel to follow a path of appeasement by “trading land for peace.” In the process we have increasingly given encouragement to Israel’s sworn enemies. If we continue to manhandle Israel, we will end up guaranteeing our own destruction.