The Reclamation of the Land of Israel: Bounty 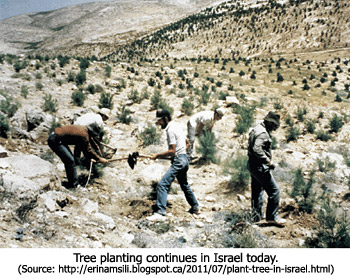 The key to the reclamation of the land of Israel proved to be an amazing organization called The Jewish National Fund.35 It was established at the Fifth Zionist Congress in Basel, Switzerland in 1901. Its sole purpose was to acquire and develop land for Jewish occupation.

In addition to relying on wealthy donors, the JNF raised money in down-to-earth way by distributing collection boxes to Jewish homes. These came to be know as “The Blue Boxes.” During the period between the two world wars, about one million of these tin collection boxes were distributed to Jewish homes throughout the world.36 From 1902 to the late 1940s, the JNF also sold colorful stamps to raise money.37

The JNF bought its first parcel of land in 1903. It consisted of 50 acres in Hadera, located on the Mediterranean coast, about 30 miles north of Tel Aviv.38 The organization played a central role in the establishment of the first modern Jewish city — Tel Aviv in 1909.39 By 1927, the JNF had purchased a total of over 50,000 acres of land on which 50 communities stood.40 By the eve of statehood in May 1948, the JNF had acquired 231,290 acres of land.41

The record of accomplishments of the JNF by the beginning of the 21st Century was truly remarkable. The organization owned 13 percent of the total land in Israel, and it had planted over 250 million trees. It had also built 180 dams and reservoirs, developed 25,000 acres of land and established more than 1,000 parks.42

One of the major projects of the JNF throughout its history has been reforestation. The Bible itself has often served as the guide. For example, one of Israel’s foremost authorities on reforestation remembered that Abraham planted tamarisk trees in Beersheba, located in the southern Negev Desert area. Following Abraham’s lead, over 2 million of the trees were planted in the same area, and the discovery was made that the tamarisk thrives in areas of scanty rainfall.43 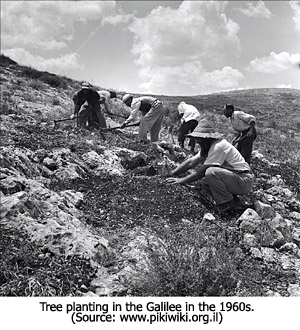 As pointed out before, over 250 million trees were planted in Israel during the 20th Century (and I personally planted at least 100 of them!). Israel was the only nation in the world to enter the 21st Century with a net gain of trees.44

The conservation and distribution of water has also played a key role in Israel’s reclamation of its land. The major need was to devise a method to transfer water from the Sea of Galilee in the north to the major cities in the south and to the Negev Desert in the extreme south.

In 1953 construction began on a water carrier that would transport water from the Sea of Galilee to the Negev Desert in a complex system of giant pipes, open canals, tunnels, reservoirs and mammoth pumping stations. The National Water Carrier was inaugurated in 1964, with 80 percent of its water being allocated to agriculture and 20 percent for drinking water.45

Another key element was the development of drip irrigation whereby flexible water pipes were spread out on the ground with holes in them to distribute the precious water at the base of each plant. This innovation stopped the waste of water that occurred through evaporation when irrigation was done by spraying water into the air.46 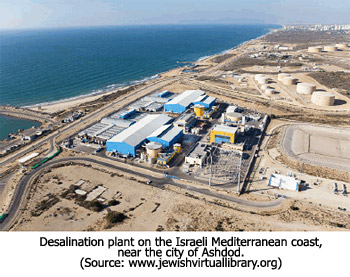 As immigrants have continued to flood into Israel over the years, the demand for water has greatly increased. The latest innovation to meet those needs is the desalination of sea water. Desalination plants are being constructed all along the Mediterranean coast of Israel. Desalination already provides 300 million cubic meters of water per year — almost 40 percent of the nation’s water needs.47 A new plant near Tel Aviv that will open this summer will produce 7 million gallons of potable water every hour.48

The result of all these reclamation efforts has been phenomenal. The land that was desolate at the beginning of the 20th Century is now the bread basket of the Middle East. The nation is now more than self-sufficient. It exports agricultural products to both the Arab countries of the Middle East and to the nations of Europe.

When people think of Jews, they normally think of people who have excelled in the area of finance. But modern Jews in Israel have made their mark in agricultural production, military prowess and, in more recent years, high-tech innovations.

Due to the diversity of the land and climate across the country, and all the efforts at reclamation, Israel is able to grow a wide range of crops. Field crops include wheat, sorghum, corn and cotton. Fruit and vegetables grown include citrus, avocados, kiwi fruit, guavas, mangoes and grapes. Additionally, tomatoes, cucumbers, pepper, zucchini and melons are commonly grown throughout the country. Subtropical areas produce bananas and dates, while in the northern hills, apples, pears and cherries are grown.49

The dairies of Israel produce the highest amounts of milk per animal in the world.50 Israel is one of the world’s leading fresh citrus producers and exporters, including oranges, grapefruit and tangerines.51 The Israelis have developed the world’s first long shelf-life commercial tomato varieties.52 Israel grows vast quantities of flowers for export.53 And Israel is the world’s leader in agricultural research and development.54

Today, Israel is focusing on the greening of the Negev Desert which constitutes 55 percent of the nation’s land. They have devised water conservation techniques to save the one inch of rainfall per year in the Negev. They have also genetically engineered plants to grow on the brackish water reservoirs that exist below the surface of the desert.

As a result of these efforts, half a million Jews now live in the desert, in 250 thriving agricultural settlements.55 The American Society for Horticultural Sciences recently stated that Israel’s desert agricultural technology is “one of the most significant advances in food production in the past 1000 years.”56 Today, over 10,000 Israeli brackish water specialists are training agronomists and villages in 54 countries around the world.57

Perhaps the most amazing thing that can be said about the reclamation of the land and the agriculture it has produced is that the United Nations, which normally specializes in condemning Israel, has declared that Israel is “the most agriculturally efficient land on earth.”58

Can there be any doubt that Ezekiel’s astounding prophecy about the reclamation of the land of Israel in the end times has been fulfilled? Read it again (Ezekiel 36:34-35):

The desolate land will be cultivated instead of being a desolation in the sight of everyone who passes by. They will say, “This desolate land has become like the garden of Eden; and the waste, desolate and ruined cities are fortified and inhabited.”

Or consider this prophecy of Isaiah (Isaiah 51:3):

Indeed, the LORD will comfort Zion;
He will comfort all her waste places.
And her wilderness He will make like Eden,
And her desert like the garden of the LORD;
Joy and gladness will be found in her,
Thanksgiving and sound of a melody.

In like manner, can there be any doubt that the fulfillment of these prophecies indicates that we are living in the season of the Lord’s return? Maranatha!

44) Jewish National Fund, “Caring for the Land and Our People,” www.jnf.ca/history-nav.html, page 1.