The Reclamation of the Land of Israel: Return of the Jews 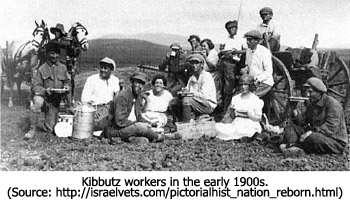 In a book published in 2007, an American Orthodox Jewish Rabbi named Menachem Kohen, asserted that the greatest miracle performed by God during the past 1800 years was one that occurred daily in the land of Palestine — namely, little or no rain.24 He refers to it as a “reoccurring miracle.”25 And he asserts that this miracle of drought was for the purpose of fulfilling prophecies in Deuteronomy 28 which read: “The LORD will make the rain of your land powder and dust…” (Deuteronomy 28:24). He also points to other prophecies:

You shall bring out much seed to the field but you will gather in little, for the locust will consume it (Deuteronomy 28:38).

The locust shall possess all your trees and the produce of your ground (Deuteronomy 28:42).

Additionally, Rabbi Kohen contends that this reoccurring miracle of God was for the purpose of protecting the Jewish homeland from occupation by foreign Gentiles. In other words, God purposefully made the land desolate so that it could be preserved for the Jews when He would regather them in the end times — at which time the land would be reclaimed.26

The Return of the Jews

So, when the Jews started returning to their homeland in the 1890s, they did not find a land “flowing with milk and honey.” Instead, they were faced with trying to eke out a living in a desolate wasteland plagued with malaria-infested swamps. They paid exorbitant prices for the land, and the Muslims who lived there (people who considered themselves to be either Syrians or Turks) laughed all the way to the bank.

The Jews organized themselves into fortress-like communities called either a kibbutz or a moshav.27 These were collective farms that provided mutual help to their members and protection from Arab attacks.

The pioneers went to work immediately, attempting to drain the swamps and get rid of the malaria infested mosquitos. Eucalyptus trees were imported from Australia and planted around the perimeters of the swamps.28 They were selected because of their reputation for absorbing large amounts of water. When these proved insufficient, canals were dug to drain the swamps to the sea.29 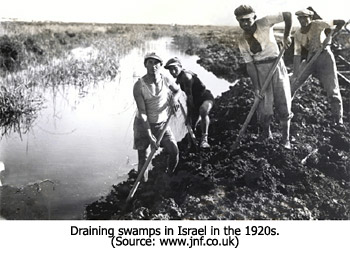 At the same time, the pioneers began replanting the forests of Israel. This was a very serious need. From the Sea of Galilee to the south, all the trees had been cut down. In the Galilee area in the north, there were only 15,000 trees left.30 They had been cut for firewood and military use, and some forests had been burned for hunting purposes.31 The last sizeable remnants of forests had been cut down in modern times to fire Turkish railway engines.32 I think it is also interesting to note that the Turks taxed trees, so there was an incentive to cut down trees to alleviate the tax burden!33

As the trees were being planted and the land cleared of rocks so that it could be recultivated, the rainfall began to increase miraculously. During the 20th Century, it increased 10 percent every decade, for a total increase of over 100 percent!34

In the fourth and last part of this series on the restoration of the land of Israel, we’ll look at how The Jewish National Fund was used by God to return the Holy Land from desolation to bounty in fulfillment of Ezekiel 36:34-35.

33) Hearings before the Committee on Foreign Affairs of the House of Representatives of the Sixty-Seventh Congress of the United States, “Establishment of a National Home in Palestine,” 1922, page 8.

34) Grant Jeffrey, “Revelation in our Generation?” http://www.theforbiddenknowledge.com/hardtruth/revelation_our_generation.htm. (An excerpt from Jeffrey’s book, The Signature of God published by Thomas Nelson in 1998.).