The Reclamation of the Land of Israel: Desolation 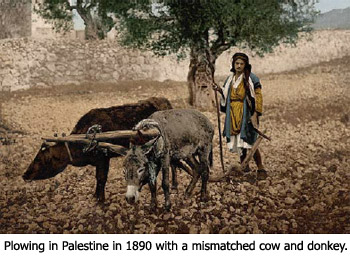 The Nature of the Promised Land

Keep in mind that the Jewish homeland was one of great abundance when the Jewish people entered it some 1400 years before the time of Jesus. Here’s how it was described by Moses (Deuteronomy 8:7-9):

…the LORD your God is bringing you into a good land, a land of brooks of water, of fountains and springs, flowing forth in valleys and hills; a land of wheat and barley, of vines and fig trees and pomegranates, a land of olive oil and honey; a land where you will eat food without scarcity, in which you will not lack anything; a land whose stones are iron, and out of whose hills you can dig copper.

Moses further characterized the land as being very different from the arid land of Egypt because it “drinks from the rain of heaven” (Deuteronomy 11:10-11). Moses also described it as “a land for which the LORD your God cares; the eyes of the LORD your God are always on it, from the beginning even to the end of the year” (Deuteronomy 11:12). Ezekiel affirmed this evaluation of the land many years later when he wrote that God swore to the Jewish people that He would bring them out of the land of Egypt into a land “flowing with milk and honey, which is the glory of all lands” (Ezekiel 20:6-7,15).

The Desolation of the Land

Yet, just as prophesied, this glorious land became “a haunt of jackals” and “a heap of ruins” (Jeremiah 9:11).

Rainfall diminished, trees were cut down, top soil eroded and excessive sedimentation in the valleys resulted in water-logging and the creation of swamps. With swamps came an outbreak of malaria which weakened the population and led to the abandonment of villages and formerly cultivated land.1 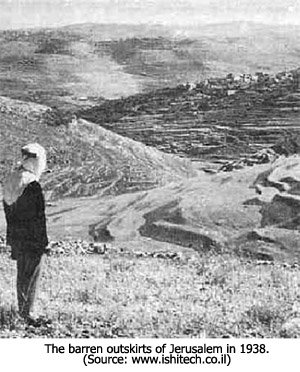 The land became repugnant, and during the 1800 years the Jews were away exiled from it, no one really desired it. It became a deserted wasteland, and Jerusalem became an incubator of disease. By the beginning of the 19th Century, it was a place people avoided, except for the most fanatical Christian pilgrims — like the Russians who would walk all the way to the Holy Land and die there.

In my library I have a number of books written in the 19th Century by Western explorers who wrote graphic descriptions of the land. Following are some examples.

In 1855 an American named medical doctor, Jonathan Miesse, traveled to the Holy Land and published his recollections in 1859 in a book titled A Journey to Egypt and Palestine.2 (Israel had been renamed Palestine by the Romans and was still called by that name in the 19th Century).3

…at present, nearly three thousand years after David, the country is a prey to the wild beasts, and to the wilder Bedouins; and of the inhabitants, each plants just enough to satisfy his greatest bodily wants, all surplus the Bedouin will take, and what he leaves behind, the ruling Turk will confiscate.

His reference to the Turks pointed to another curse on the land. The Ottoman Empire of the Turks had taken control of the land in 1516, and they quickly establish a reputation for administrative incompetence and corruption.

Twelve years later, an American journalist named Mark Twain made a trip to Palestine. He published his impressions in 1869 in a book titled The Innocents Abroad.4 It was the book that made Twain famous. He described Palestine as a “blistering, naked, treeless land.”5 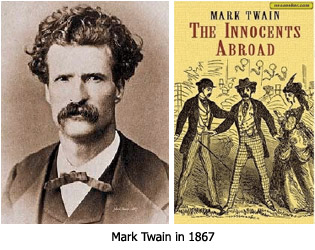 Regarding the Sea of Galilee area, in particular, Twain wrote, “There is not a solitary village… There are two or three small clusters of Bedouin tents, but not a single permanent habitation. One may ride ten miles, hereabouts, and not see ten human beings.” Then, referring to Bible prophecy, he wrote, “To this region, the prophecies apply: ‘I will bring the land into desolation; and your enemies which dwell therein shall be astonished at it'” (Leviticus 26:32).6

A reference to fulfilled prophecy in this passage is remarkable since Mark Twain was not a believer. Even more so when you consider that he added this statement: “No man can stand here [in this deserted area] and say the prophecy has not been fulfilled.”7

Concerning the Valley of Jezreel (or the Valley of Armageddon, as Christians call it), Twain observed, “A desolation is here that not even imagination can grace with the pomp of life and action.”8 He described the central highlands of Samaria by stating, “There was hardly a tree or a shrub anywhere. Even the olive and the cactus, those fast friends of a worthless soil, had almost deserted the country.”9 Continuing with his description of Samaria, he wrote: “No landscape exists that is more tiresome to the eye than that which bounds the approaches to Jerusalem.”10

Twain’s summary description of the land was a dismal one: “…it truly is monotonous and uninviting… It is a hopeless, dreary, heart-broken land.”11

Twain concluded his observations about Palestine in the mid-19th Century with these poignant words: “Palestine sits in sackcloth and ashes… and why should it be otherwise? Can the curse of the Deity beautify a land?”12

Another American tourist, Henry M. Field, published a book about his trip to Palestine in 1884. He wrote about the treeless, desolate landscape as follows:13

The country seemed deserted of human habitations… Its appearance was made still more desolate by being without trees. While riding among the hills, I did not see a single tree. Whether this be owing to the government tax on trees, or the wastefulness of the people in cutting for fuel every young tree almost as soon as it shows its head above the ground, I know not; I only state the fact, that the landscape was absolutely treeless.

As the 20th Century began and the Jews started to return to their homeland, the condition of the land had not improved. In 1912 a British traveler by the name of Sir Frederick Treves, published a book appropriately titled, The Land That Is Desolate.14

[The area] is practically treeless. Such hedges as exist are mostly of prickly cactus… The villages passed are secretive-looking clumps of flat-topped huts made, it would seem, of a chocolate-coloured mud and decorated with litter and refuse.

Speaking of the area surrounding Jerusalem, Treves observed that “the hills are bare save for some hectic grass and starveling scrub.”16 As for Jerusalem, he wrote:17

…the city itself is as the shadow of a rock in a weary land. With the exception of a few pallid olive trees, a patch here and there of indefinite green, and a melancholy cypress, the environs of Jerusalem are a dusty, ungenial limestone waste. 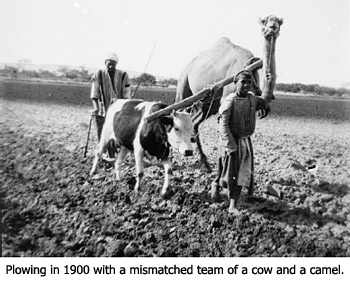 Treves described Bethlehem as “a drab city of drab houses on a drab ridge, as monotonous in colour and as cheerless looking as a pile of dry bones.”18 Likewise, he wrote about the Nazareth area as being “a sorry country, for the land is bare, harsh, and treeless… Here is assuredly to be seen the poverty of the earth.”19 Regarding the Galilee area, he described it as “abandoned.”20 Concerning the “wholly dirty town of Tiberias,” he stated that it was “a wretched and stinking place” with “sturdy vermin.”21

Even as late as the mid-1920s, Palestine was still being described as “a barren, rocky and forbidding land” by Oliver C. Dalby in his booklet, Rambles in Scriptural Lands.22 He characterized Jerusalem as a place where the streets were “narrow and dirty,” and where “the buildings are austere and unattractive.23

In the third part of this series on the restoration of the land of Israel, we’ll look at the beginnings of the Jewish return to their homeland.

1) Scientific American, “50 Years Ago: The Reclamation of a Man-Made Desert,” April 1960, www.scientificamerican.com.