Israel as Proof of God’s Existence: Proof of Design in Nature

On to my second proof of God’s existence: Design in Nature.

The Bible itself points us to this evidence:

1) The heavens are telling of the glory of God;
And their expanse is declaring the work of His hands.

2) Day to day pours forth speech,
And night to night reveals knowledge.

In other words, the universe we exist in, and the planet that serves as our home, are both so complex and beautiful in their design that they literally shout the existence of a Designer.

Consider the Earth. Its size is perfect. If it were smaller, an atmosphere would be impossible, like the planet Mercury. If the Earth were larger, its atmosphere would contain free hydrogen, like Jupiter. Earth is the only known planet with an atmosphere composed of the right mixture of gases to sustain life.

Likewise, the Earth is located at precisely the right distance from the sun. If it were farther away, we would freeze. If it were closer, we would burn up.

The Earth’s moon is the perfect size and distance from the Earth for its gravitational pull to move the oceans and keep them from stagnating, while preventing them from spilling across the continents.

The Earth is the only object in the universe that we know of that contains water — an essential ingredient for life. And the Earth has a built in hydrological system whereby water evaporates from the oceans, leaving behind the salt content, and then is distributed as rainfall over the continents.

Or, consider the fact that in every cell of our bodies there exists a very detailed instruction code that is like a miniature computer program. This DNA code is a three-billion-lettered program that tells each cell how to act. It is like an operational manual.

How could such complex designs be the result of chance? Or, the consequence of a “Big Bang” explosion? How many explosions have you ever heard of that produced order instead of chaos?

Yet, scientists with Ph.D.s piled on top of each other take a look at all this design and declare it to be an “accidental product of evolution.”

To me that’s equivalent to standing in front of Mt. Rushmore and declaring, “Wow! Isn’t it amazing what can be produced accidently by erosion?” If I were to say that in front of a scientist, he would declare me to be a fool. Yet, scientists declare the same nonsense about our planet and the life that exists on it. 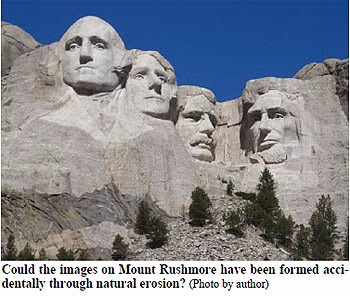 It’s no wonder that Ray Comfort gave his book about Atheism the title: You Can Lead a Scientist to Evidence, But You Can’t Make Him Think!

In the fourth segment of our study of how Israel proves the existence of God, we’ll pause thirdly to look at the proof of fulfilled Bible prophecy.