The Fall of Islam: Islam’s Fight 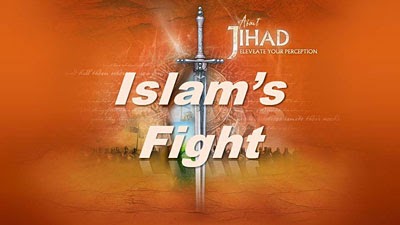 How does Islam fight? What are their tactics? 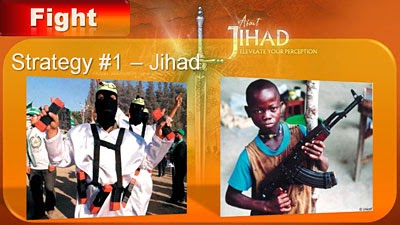 Jihad as stated earlier in this series means “the struggle” or “the strive to do the will of Allah.” In its essence, jihad is the armed struggle for Islam against infidels and apostates.

There are 100 verses in the Koran which talk about jihad. Some Muslims will claim, “The earlier verses are more peaceful and those are the ones we follow.” But, Islam teaches that later verses abrogate or replace earlier verses. In the beginning, Mohammad was trying to get Christians and Jews to join his side. They wouldn’t, so in response he fostered a virulent hatred of both Christians and Jews. So, the later verses which talk about killing Jews and Christians are the ones that Islam is supposed to follow and teach.

Let’s look for instance at Sura 9:5 as an example of the Koran commanding the death of the infidel, “Fight and slay the pagans wherever you find them and seize them and beleaguer them and lie and wait for them in every stratagem.”

Sura 2:191-192 also teaches that a Muslim must kill the unbeliever. “And kill them wherever you find them, and drive them out from whence they drove you out, and persecution is severer than slaughter… if they do fight you, then slay them; such is the recompense of the unbelievers.”

Sura 9:29 teaches that conquered infidels can be allowed to live as long as they become second-class citizens and pay a special tax. “Fight those who believe not in Allah nor the Last Day, nor hold that forbidden which hath been forbidden by Allah and His prophet, nor acknowledge the religion of Truth, [even if they are[ of the People of the Book [the Christians[, until they pay the Jizya [the tax[ with willing submission, and find themselves subdued.”

The Hadith also talks about the killing of the Jews, such as Book 041 Number 6985 per Sahih of al-Bukhari. “The last hour would not come unless the Muslims will fight against the Jews and the Muslims would kill them until the Jews would hide themselves behind a stone or a tree and a stone or a tree would say: ‘Muslim, or the servant of Allah, there is a Jew behind me; come and kill him’…”

What fuels jihad? The answer — the promise of Paradise. The only assurance a Muslim is given that they will make it into Paradise is by killing the infidel. Sura 47:4-7 teaches, “When you meet unbelievers smite their necks, and then when you have made wide slaughter among them tie fast… And those who are slain in the way of god, he will not send their works astray, he will guide them and dispose their minds alright and he will admit them to paradise that he has made known to them.”

The Muslim is also taught never to make a covenant or an agreement or a treaty with an infidel. Sura 4:89 commands, “They wish you would disbelieve as they disbelieved so you would be alike. So do not take from among them allies until they emigrate for the cause of Allah. But if they turn away, then seize them and kill them wherever you find them and take not from among them any ally or helper.”

These are the marching orders of the Muslim as taught by the Islamic holy books. 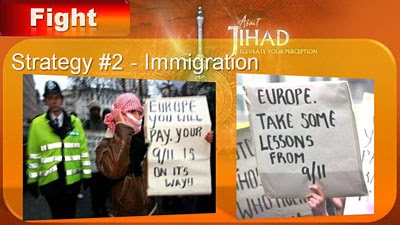 If you are unable to defeat a people group or nation militarily, then the second best strategy is to defeat them by moving your population into their land. What great historical example do we have of that successfully happening? The fall of Rome. Rome’s army couldn’t be defeated, so what did the Visigoths and the Vandals from the north end up doing? They just moved into Rome. Pretty soon the invaders were the predominate people living in the land, and Rome fell. Islam is utilizing the same strategy, and very effectively at that.

Muammar al-Qaddafi of Libya once said, “There are signs that Allah will grant victory to Islam in Europe without swords, without guns, without conquest. We don’t need terrorists, we don’t need homicide bombers. The 50 plus million Muslims in Europe will turn it into a Muslim continent within a few decades.”

The following video is quite informative utilizing modern-day statistics to show how once Islam gets a foot in the door how they eventually end up taking over a country. It also shows what that country look like once it is fully taken over. A transcript follows.

If you live in the West and are concerned with Islam and the assimilation of your country, this video has a message for you.

“What Islam is Not” was published in the frontpagemagazine.com on April 21, 2008 and is an adaptation from a book written by Dr. Peter Hamon, Slavery, Terrorism, and Islam.

What Islam is not. Islam is not a religion, nor is it a cult. In its fullest form it is a complete, total, 100% system of life. Islam has religious, legal, political, economic, social, and military components. The religious component is foundational for all of the other components.

As long the Muslim population remains around or under 2% in any given country, they will be for the most part regarded a peace-loving minority, and not seen as a threat to other citizens. This is the case in the United States, Australia, Canada, China, Italy, and Norway.

At 2-5%, they begin to convert some other ethnic minorities and disaffected groups, often with major recruiting from the jails and among street gangs. This is happening in Denmark, Germany, United Kingdom, Spain and Thailand.

From 5% on, they exercise an excessive influence in proportion to their percentage of the population. For example, they will push for the introduction of halal food, which is clean food by some standards, thereby securing food preparation jobs for Muslims. They will increase pressure on supermarket chains to feature halal on their shelves, along with threats for failure to comply. This is incurring in France, Philippines, Sweden, Switzerland, the Netherlands, Trinidad, and Tobago. At this point they will work to get the ruling government to allow them to rule themselves within their ghettos under Shar’ia, the Islamic law. The ultimate goal of the Islamics is to establish Shar’ia Law over the entire world.

When Muslims approach 10% of the population, they tend to increase lawlessness as a means of complaint about the condition. In Paris we are already seeing car burnings. Any non-Muslim action offends them and results in uprisings and threats, such as in Amsterdam and in other Western cities, with opposition to Mohammad cartoons and films exposing Islam. Such tensions are seen daily, particularly in Muslim sections in Guyana, India, Israel, Kenya, and Russia.

After reaching 20%, nations can expect hair-trigger rioting, jihad militia formations, sporadic killings, and the burnings of Christian churches and Jewish synagogues such as in Ethiopia.

At 40%, nations experience wide-spread massacres, Islamic terrorist attacks, and ongoing militia warfare, such as in Bosnia, Chad, and Lebanon.

At 60%, nations experience unfettered persecution of non-believers of all other religions including non-conforming Muslims. Sporadic ethnic cleansing, using Shar’ia Law as a weapon, jizya, and attacks placed on infidels; such as in Albania, Malaysia, Qatar and Sudan.

After 80%, expect daily intimidation and violent jihad, some state-run ethnic cleansings, and even genocide as these nations drive out the infidels and move towards 100% Muslims. Such is ongoing in Bangladesh, Egypt, Gaza, Indonesia, Iran, Iraq, Jordan, Morocco, Pakistan, Palestine, Syria, Tajikistan, Turkey, and United Arab Emirate.

100% will enter into the peace of Dar al Salam, the Islamic house of peace. Here there is supposed to be peace because everybody is a Muslim. The madrasahs are the only schools and the Koran is the only word. Such as in Afghanistan, Saudi Arabia, Somalia and Yemen. Unfortunately, peace is never achieved as in these 100% states the most radical Muslims intimidate and spew hatred and satisfy their blood lust by killing less radical Muslims for a variety of reasons.

A quote from the book the Leon Uris, The Haj: “Before I was nine I had learned the basic cannon of Arab life. It was me against my brother; me and my brother against our father; my family against my cousins and the clan; the clan against the tribes; the tribe against the world; and all of us against the infidel.”

It is important to understand that in some countries with well under 100% Muslim populations such as France, the minority Muslim population live in ghettos within which they are 100% Muslims and in which they live by Shar’ia law. The national police do not even enter these ghettos. There are no national courses or school or non-Muslim religious facilities. In such situations Muslims do not integrate into the community at large. The children attend madrasahs where they learn only the Koran. To even associate with an infidel is a crime punishable by death. Therefore, in some areas of certain nations, Muslim imams and extremists exercise more power than the national average would indicate.

Today’s 1.5 billion Muslims make up 22% of the world’s population, but their birth rate dwarf the birth rate of Christians, Hindus, Buddhists, and Jews and all other believers.

Muslims will exceed 50% of the world’s population by the end of this century.

These are the ways that Islam takes over the world — jihad and immigration. We are even seeing today in my own country of the United States of America an increasing in violence and bombings on our own land. Some Americans are converting to Islam and being trained offshore to do these heinous deeds. We are moving up the percentages of Islamic penetration and there appears to be no stopping it.

In the eighth segment of this study on the fall of Islam, we’ll learn how Muslims view the end times.