The Fall of Islam: Islam’s Salvation 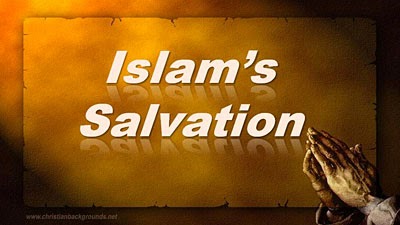 I have to admit one thing. I’m going to admit it right here: I’m a “hater.” I’m a card-carrying hater of Islam, which is a terrible thing to say in this PC world nowadays, but bear with me.

Do you know why I hate Islam? I hate what it does to their people. It enslaves over a billion people to a religion that tells them that they must kill themselves in order to be assured of going to Heaven.

I hate that Satan rules it, and so far he’s gotten away with it.

I hate it because of all the Christians that have been murdered in the name of Allah. Our ministry supports a gentleman by the name of Standfast Oyinna in Nigeria. He recently reported the Muslims of Boko Haram broke into his church with hatchets and machetes. They were chopping up the people. Standfast’s own son put his hand up to defend his head and they chopped his hand clean off. And this happens to their village almost weekly! One of the people in his church almost lost his children. Boko Haram were taking the town children and throwing them down a well. Fortunately, they escaped with some other children, praise the Lord!

This is what Islam does to a nation — it subjugates and then puts us back into the dark ages. It sends people to Hell by the billions.

So yes, I hate Islam because I hate Satan. But, as you know, as Christians we are called to hate evil and to love good. So, it’s okay to be a hater of Islam because it kills people for all of eternity.

Islam also presents the Church the greatest opportunity for evangelism in world history, if you know how to evangelize the Muslim.

One of the blessings of being Web Minister is that I get to talk to people all over the world. I have people write in through various venues like email and social networks. I’ve encountered so many Muslims seeking to understand God, or trying to convert me to Islam which just opens the door for me to share the Gospel with them. From these experiences, I’m going to share with you six different ways that you can reach a Muslim for Christ.

1) The Bible is okay to read.
Sura 5:46-47 and 68 says that Mohammad gave an okay thumbs up for the Muslim to read the Bible. If you give anyone the Word of God, the Holy Spirit speaks through it.

The following is a testimony off of an ex-Muslim website by a real ex-Muslim girl from Iran who calls herself Fars.

“I left Islam for several reasons. Originally because I was sent by my grandmother to a mullah to learn the Islamic prayer. I was taught this in Arabic, which as a Persian, I didn’t understand one word of it. When I asked this mullah what the heck it meant and what I was saying, he said it wasn’t important that I know, just that I say it with all my heart. Say what with all my heart? He then complained to my grandmother that I was too questioning for a girl and should be talked to. Whatever.

I finally bought an English translation of the Koran; I was appalled. No wonder the Mullah didn’t want me to know what it all meant. When I read some of the passages in English to my mother she was shocked with disbelief. ‘That can’t be right!’ She couldn’t believe it and she had been a Moslem all her life and never knew exactly what the Koran said. She and my sister have both also left Islam.

That is the tragic legacy especially in Iran which had Islam forced on it by Arabs. That is why educated college students are up in arms because they are finally beginning to understand what Islam really means and says.”

Once Fars could read the Bible in her own language, she gave her life to Christ. So, it’s okay for a Muslim to read the Bible, and you can tell them that.

2) The Life of Christ
The following is a real testimony of a man from Morocco named Ibn Zakaria.

“I left Islam because I didn’t find peace with it. Since my childhood, I had a lot of questions in my mind about Human Rights in Islam, women rights, Eternal life and about the life of Mohammed. I started looking for answers, by reading the Bible and comparing the life of Mohammed to that of The Lord Jesus Christ. I found myself far from Islam and enlighten by the Gospel and the truth of the word of God.”

When you hold up the life of Mohammed — a killer, a murderer, a wife stealer, a child molester, a liar — and put it up against Jesus Christ who is sinless, loving, holy, and died for us — the Muslim is shocked. They can’t believe the differences. The Jesus taught in the Koran isn’t that Jesus at all. Of course, anyone is attracted to someone who lays down their life for them. Tell them what Jesus did for them by dying for their sins.

3) The love of God.
Abdel Masih of Egypt shared how he became saved.

“I was born in Egypt to a Muslim family. I think in looking back that maybe my family was loving because it was liberal in its approach to Islam. It was loving not because of Islam but in spite of it. When I began to study I saw that the Koran was very filled with hate and not enough on love. Christianity seemed so much more familiar and the Sermon on the Mount is a teaching after my own heart. There is nothing like it in the Islamic literature.”

God is love. You know Muslims don’t know love from Allah whatsoever. They see these mullahs on TV and they are angry and yelling all the time. It’s a religion of hate. A Muslim like any person wants to know love, and you can reach them by telling them of the love of God.

4) The assurance of salvation.
Mounif of Morocco writes this testimony:

“My father was and still is an imam in a mosque. I had many questions about my place in Paradise, but there was no answer.”

Muslims have no assurance of salvation except for one thing, and that is to die a martyr. To kill infidels by your own death is the only assurance they have of salvation. Why do you think that certain Muslims are willing to blow themselves up? That’s the only way they can get into Paradise.

You instead can assure them that through Jesus Christ who died once and for all for their sins that they can have the assurance of Heaven with their Father.

“I had of course gone through the whole process of learning about Islam and the do’s and don’ts, and had always tried to practice it but always was struggling as if I was forever carrying a great load on my back, as if I was in a prison. After I left I felt as if I had just been released from prison.”

Islam is like shackles to a Muslim. They feel it. They know it. But, when you teach them about the grace of God, that there’s nothing you can do to be saved, that God did it all and that Jesus Christ paid for their sins on the cross, then they feel relieved. Maybe you can look back at the time when you got saved and you remember how it felt to have that weight lifted off of you? Well, a Muslim is looking for that weight to be lifted off of them as well.

6) A relationship with God.
Cynthia from American shared:

“My fear of Allah became so intense that I hoped to get cancer and therefore be punished for my sins on earth instead of after death. I would scrub and cleanse my body in prayer so obsessively, that my hands became cracked and bloody. Still, I continued to believe in a religion that on the outside looked so moral and just.

Then I did something that I told my parents and myself I would never do. I rented the movie The Passion of The Christ. I held back tears that threatened to fall from my eyes until the short scene in the movie when Mary Magdalene reverts back to the day when Jesus was the only person who would accept her and love her. I began to cry as I suddenly realized what my mother had been trying to tell me for years. Finally, I understood that God loved me and was not out to get me or do me harm. It was also at that moment that I knew that Allah was not God.

It has only been two weeks since I was saved by Jesus Christ, and they have been the happiest two weeks of my life. Every day that I wake up I am so grateful that God never left my side during my seven year hiatus. I feel like he was just patiently waiting for my return. I now live my life with an inner peace and love for God that I cannot put into words.

Thank you Jesus for never leaving me!”

A relationship with God is one of the best ways to reach a Muslim for Christ. Christians have a relationship with God, and not some distant unknowable being that could care less about them and wants their death to prove their faith, but a God who loves them and cares for them. The very Jesus you accepted.

There is a lot to fear around the world over Islam. It’s certainly a big problem right now, and our country is facing it, too. Our government lately seems to support it even. In fear of Islam, they have not only become supporters, but they have become collaborators. They are allowing Islam to take over our nation.

Where there’s a lack of faith, where there are a lack of morals, there is also a decline in population. That’s God’s way of weeding out the stupid I like to think. And, God is weeding us out and replacing us with Islam, until a point. The Bible gives us hope that Islam will fail. Jesus Christ is coming soon. He will defeat Islam. He will defeat Satan. And, I think during the Tribulation when you read in Revelation about the multitudes that have accepted Jesus Christ as Savior, I’d bet that many of them are former Muslims finally released from Islam’s hold.

So, go out and share the Gospel with Muslims. Don’t be scared of them. Don’t be scared, for they are seeking truth just like so many other people. Free them of that burden of sin and judgment by sharing Jesus Christ.