Welcome from the capital of Israel and future capital of Jesus Christ’s Millennial reign – Jerusalem! Our rooms have a great northward view of the Old City walls with all its history laid out before our very eyes. We can actually look out from our hotel and see where the Temple once stood.

Not content to just gaze, our stalwart group of pilgrims on Day 7 and our Free Day on Day 8 walked everywhere around the Old City of Jerusalem, taking in the dizzying array of historical sites and ancient smells while traversing its many steep hills and steps. One can’t help but stop repeatedly to marvel that we’re in the very same place where Jesus and the people of the Bible once lived out their life stories, the very same stories from thousands of years ago that we read about in the Bible today. 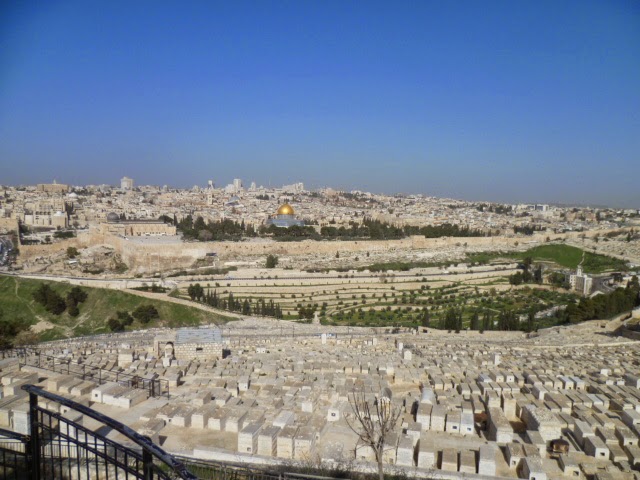 We began our day with a magnificent view from the Mount of Olives. While few olive trees remain and Jewish graves are in their places, this is the location of Jesus’ return to earth at the Second Coming. Zechariah 14 tells us that as the Antichrist besieges Jerusalem, Jesus will return to this very spot and split the Mount of Olives into two, forming a great valley from east to west. In victory He will claim His kingship! 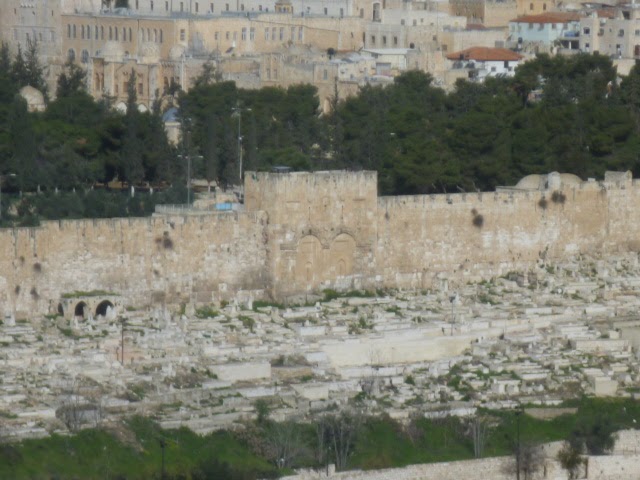 The Eastern Gate, where Jesus rode in triumphantly on Palm Sunday and will so again as King, after He blows a hole in that gate, that is (Ps. 24:7-10). 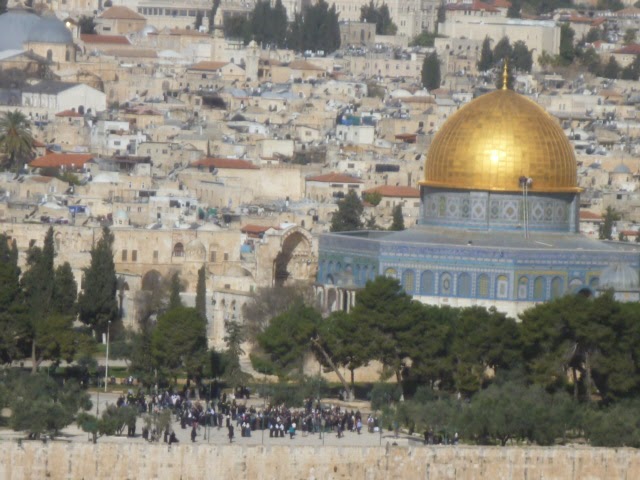 On the Temple Mount sits the Dome of the Rock, along with an angry mob of Muslims rioting and throwing stones at a Jewish Knesset member. Their angry roar echoed across the Kidron Valley and up to our spot atop the Mount of Olives. 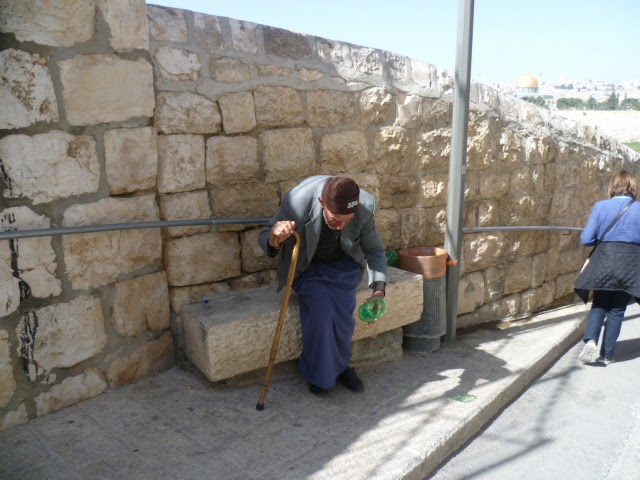 Hey, I saw that beggar five years ago! Don’t let his appearance fool you. You’d think he was a cheetah beating us down that steep hill to the Garden of Gethsemene like he did. 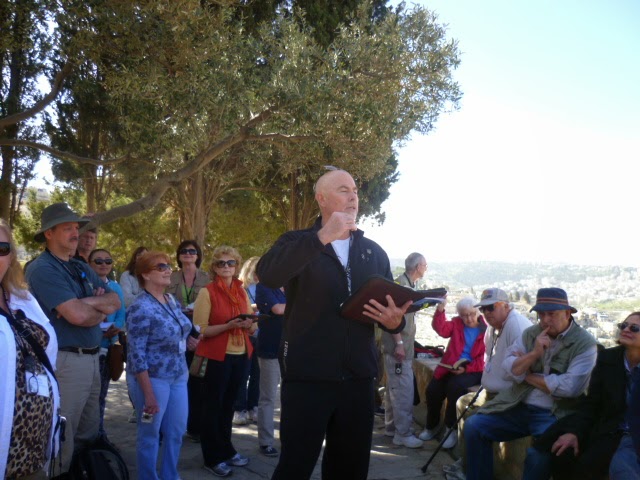 Elder George Collich preaching with a view of the whole Old City before him. We were one of five groups all from different nations standing there, all preaching and singing praises in our various languages. 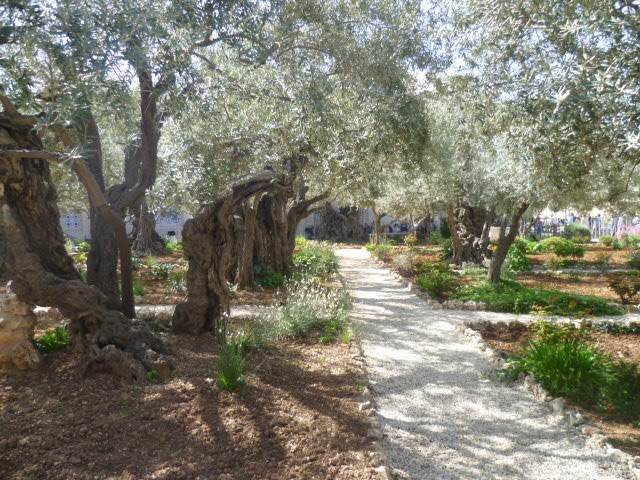 At the Garden of Gethsemene, whose olive trees are hundreds of years old, and where Jesus went to pray for strength from the Father before He was crucified on our behalf. We needed special permission directly from the Vatican to enter the Garden. 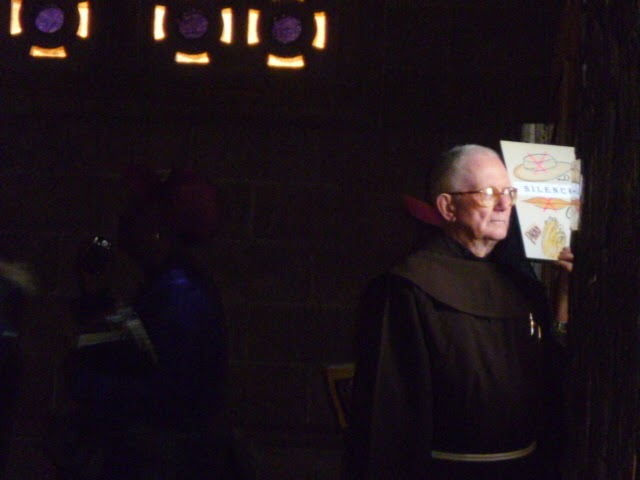 Brother Husheus Nohatticus, always there at the door to warmly greet one into the Church of All Nations. 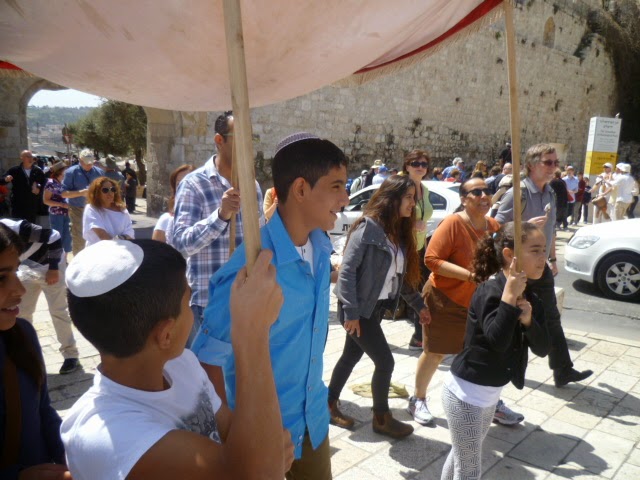 What a day for Bar Mitzvahs! This 13 year old is escorted to the sound of drums and celebration like a high official as he makes his way to the Western Wall to read from the Torah. After the celebration, he stands a man. 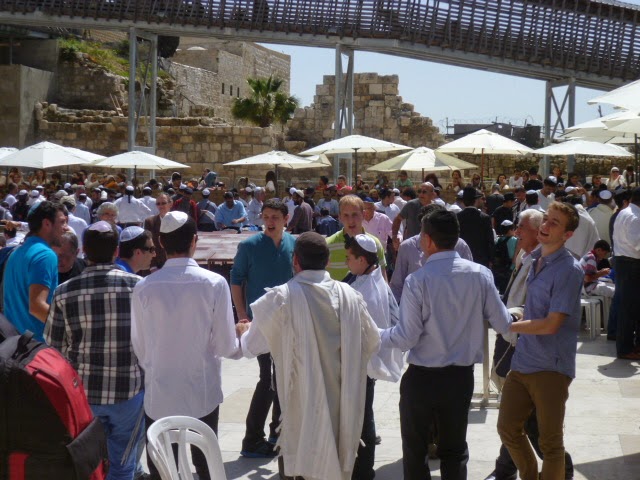 A Jewish man there to celebrate his nephew’s Bar Mitzvah told me in all his years he’d never seen so many held at the Western Wall in one day. There must have been 25 going on, with all the singing and dancing and women from the back wall throwing candy. We need this custom in the US to help shape our boys into men. 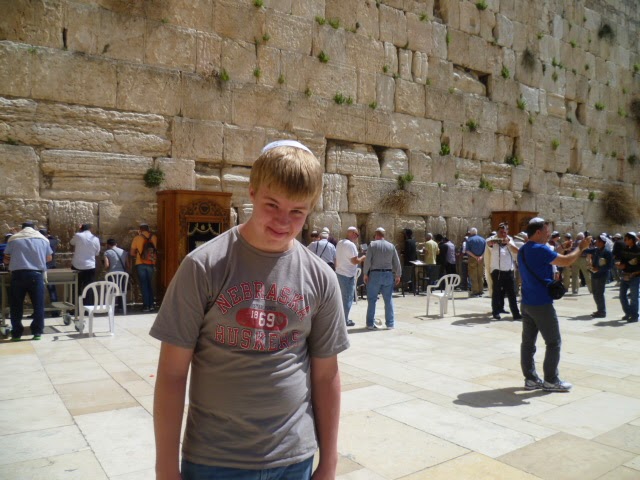 Tyler showing off his snazzy yarmulka in front of the Western Wall, a retaining wall of the Temple Mount where the Jews go to put paper prayer requests into the cracks between the stones. 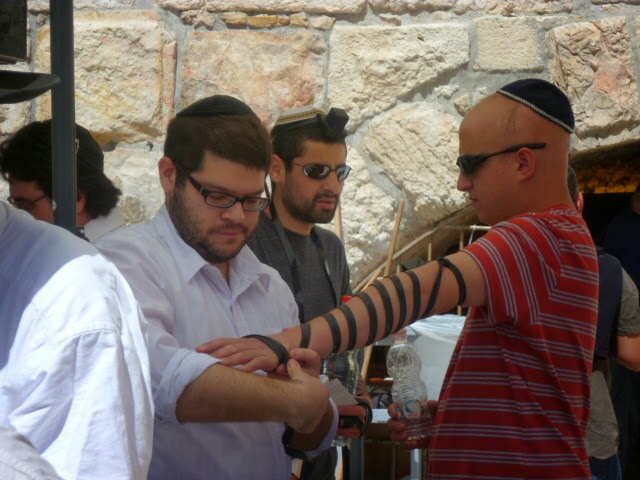 All over Jewish men where being fit in what they joke as “Jewish radar” to aid them in their prayers. 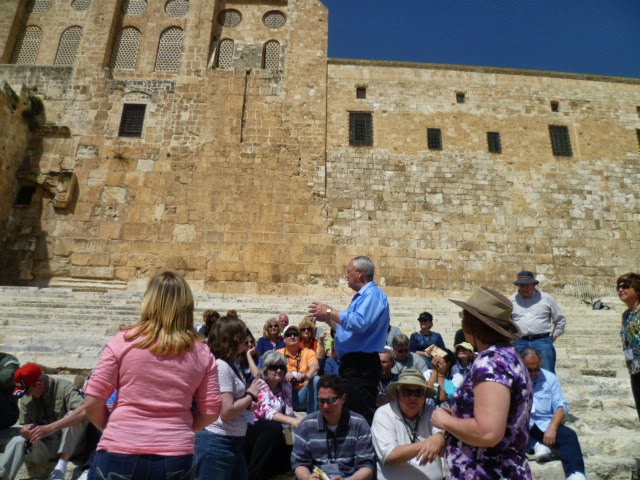 Darryl teaches us about the significance of this excavation which uncovered the very steps into the now closed Temple entrance where Jesus and the High Priest would have taught from. 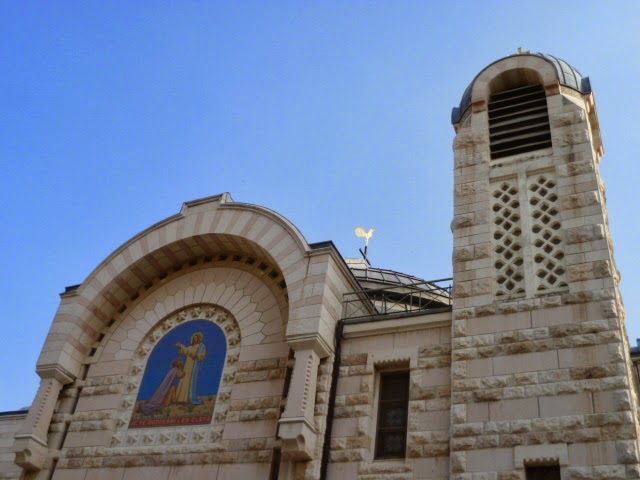 The Church of St. Peter in Gallicantu, the very likely location of Caiaphas’ house where Jesus had his illegal late night trial and Peter denied Jesus three times (Jn. 18:15-27). That’s a rooster up there. 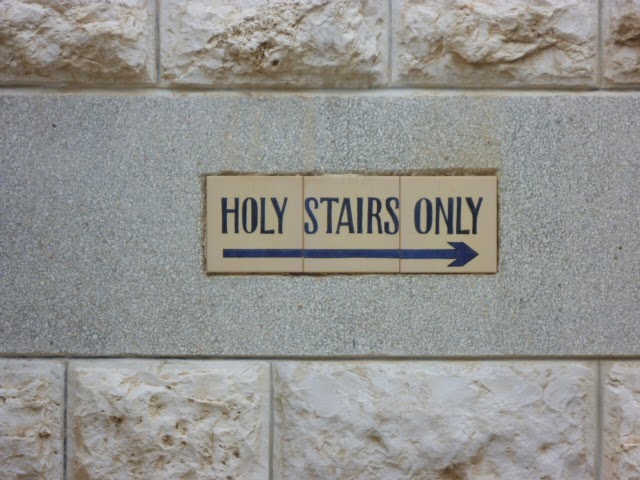 Nobody takes the Unholy Stairs. 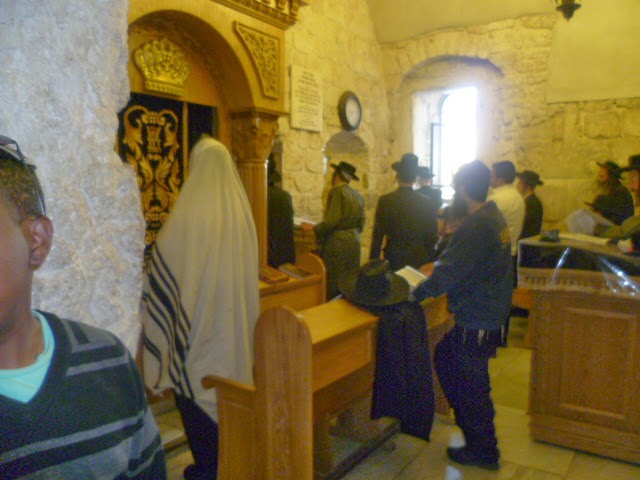 The Orthodox Jews having a head-bobbing contest at David’s Tomb. 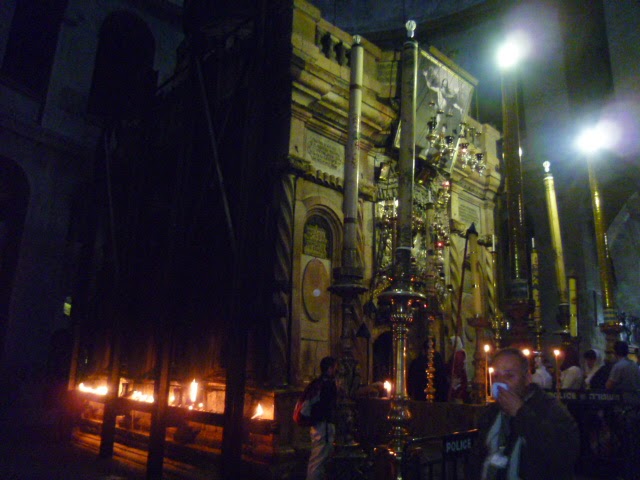 Inside the Church of the Holy Sepulchre and the supposed location of Jesus’ burial. If Heaven is a place of light and beauty and peace, this is the complete opposite. I’ve visited Hindu temples that were less idolatrous. 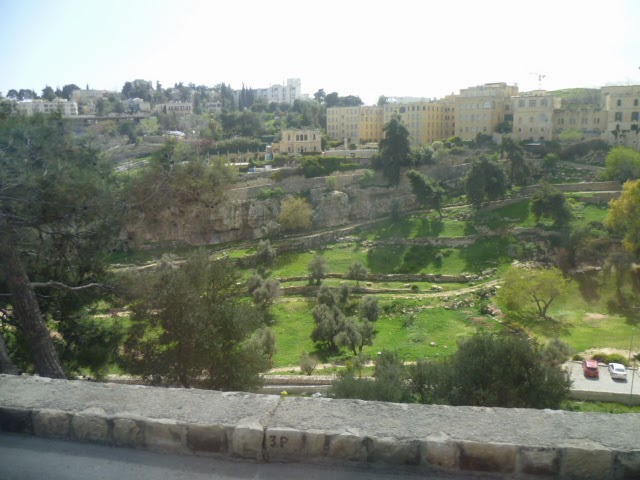 The Valley of Gehenna, where ancient Caananites used to sacrifice their children and centuries of refuse was thrown into a big, stinking, burning pile. It’s the ancient object lesson for Hell (2 Kgs. 23:10; 2 Chron. 33:6; Jer. 7:31). Now, a nice little park. 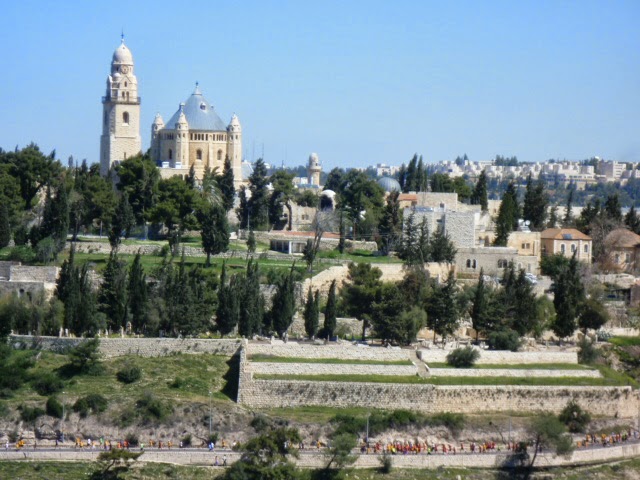 The beautiful sound of Dormition Abbey’s church bells ringing alongside the muezzin’s call for Muslims to prayer sandwiched inbetween a hard rock music beat were the backdrop that kept Jerusalem’s orange-shirted marathon runners going. The whole city shut down Friday as nearly 20,000 (minus 100 Palestinian protesting party poopers) gave up their grievances and ran around the Old City together for a day of fun in the sun.

Tomorrow for Day 9 we will go low, deep into the Dead Sea region.