Day 9 of Lamb & Lion Ministries’ 2014 Israel Tour focused on the Dead Sea region, which is the lowest point on land in all the world. And, it isn’t called the Dead Sea for nothing. When God wanted to wipe Sodom and Gomorrah off the map due to “their sin so grievous” (Gen. 18:20), He made the Dead Sea a wasteland. The mineral runoff into the Dead Sea has caused the water to be unlivable for any creature. Jewelry corrodes in just days and metal boats are eaten through in a matter of weeks. The adjacent cliffs are salt encrusted and barren. Fresh water is almost impossible to find. Flies buzz all around like on a carcass. The place even smells strongly of what one would imagine fire and brimestone to smell like.

The Dead Sea is a testament to the severity of God’s judgment when mankind totally abandons morality. But, prophetically it will also be a testament to God’s restorative power, which you can read more about at the bottom of this post. 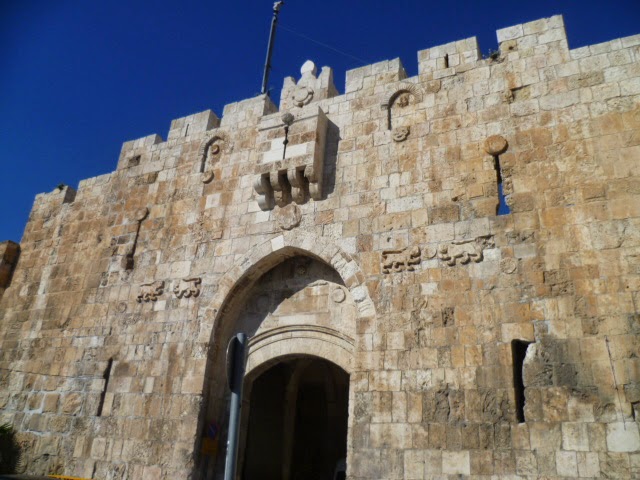 On the way to our bus we went through the Lion’s Gate in the Arab Quarter. See the little lions? It’s also known as Saint Stephen’s gate, the site where Stephen was stoned to death and became the first Christian martyr (Acts 6-7). 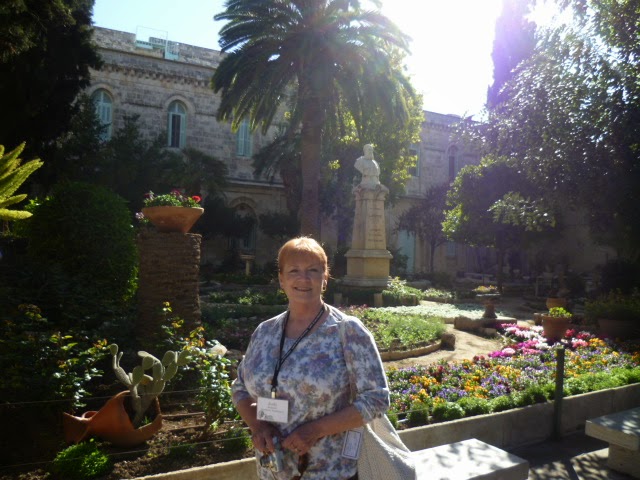 Just inside the Lion’s Gate, where the Sheep Gate once stood, is the Church of Saint Anne and the healing Pools of Bethesda (Jn. 5:1-15). Judy shows off the beautiful gardens that lie outside. 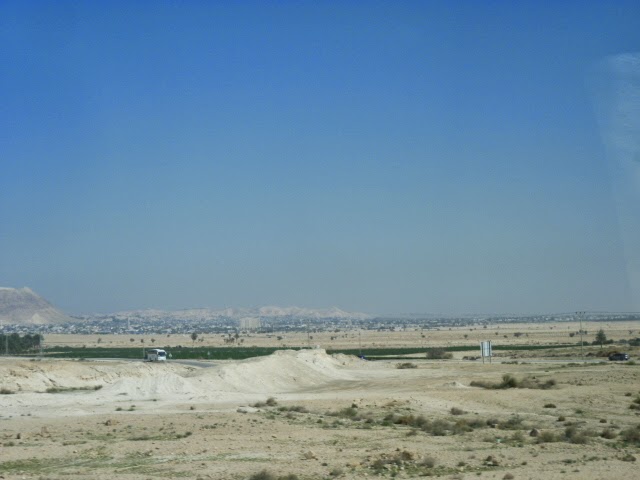 Passing through the Judean Wilderness, we drive by the city of Jericho. With all that room on the surrounding plain, it’s easy to imagine hundreds of thousands of Israelites marching around the ancient city walls until they all fell down (Josh. 6). 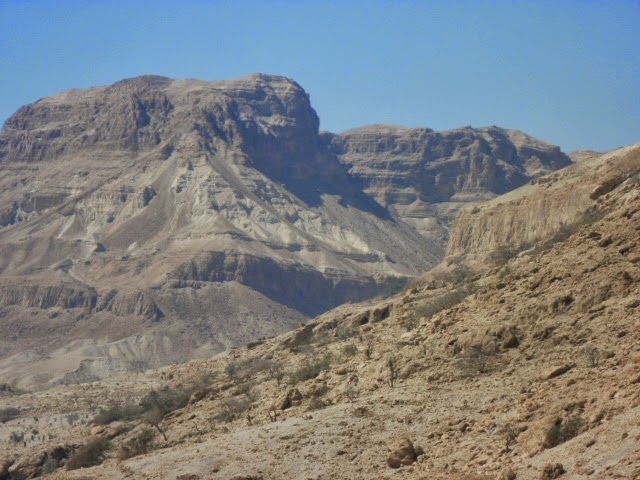 The barrenness of the Dead Sea region with its steep and rocky terrain covered in veins of white salt is a lonely spectacle to behold. 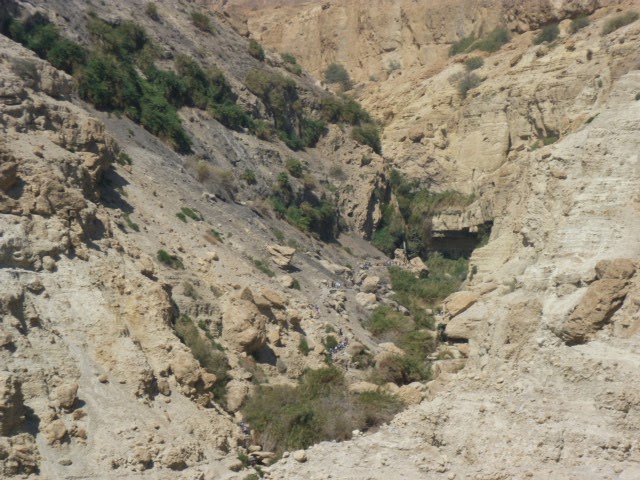 The one spot that isn’t barren but is a font of life is En Gedi, the oasis among the desert and popular hideout of King David (1 Sam. 23:29). The falls deep within the rocky recesses provided life to David and his men. 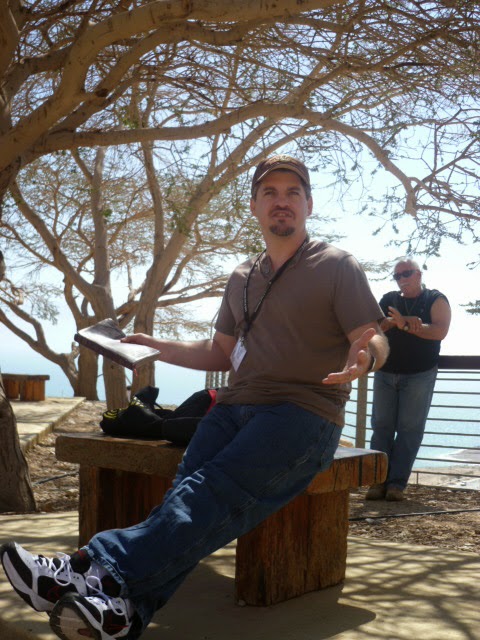 Nathan Jones at Ein Gedi teaching on the Dead Sea history of the destruction of Sodom and Gomorrah by God and the way He will bring life back to that dead land once more during His Millennial Kingdom (see below). 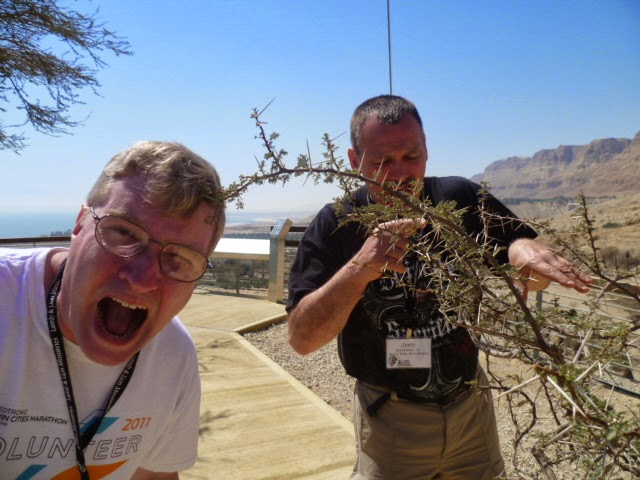 Who plants a thorn bush once used to make the crown of thorns from Jesus’ Crucifixion in the middle of a park?!? 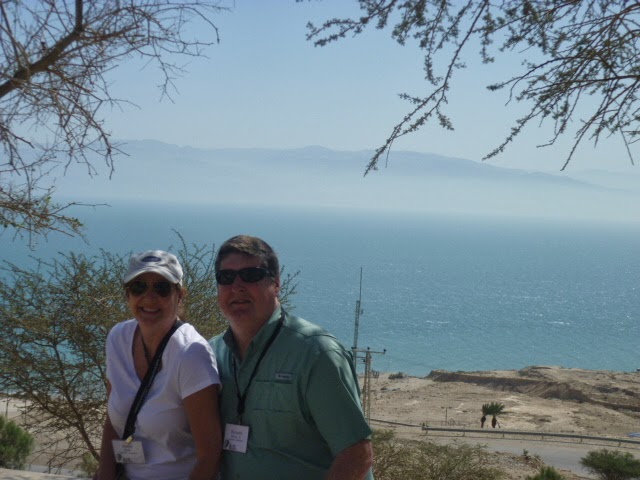 The Dead Sea may be absolutely dead, but the morning mist makes for a beautiful setting. 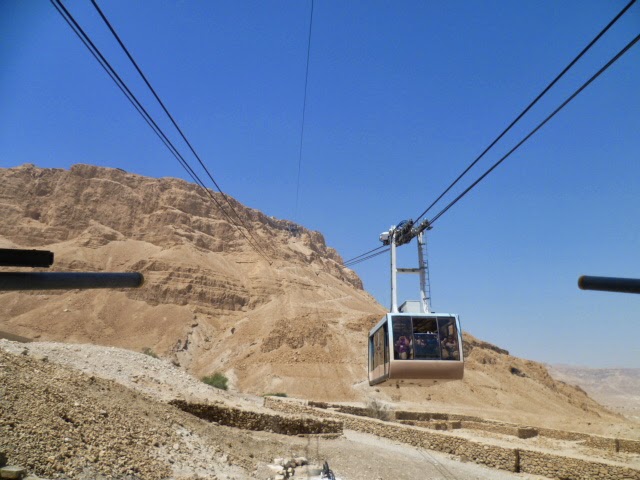 What the people of the First Century would have given for one of these cable cars up to Herod’s desert fortress of Masada. 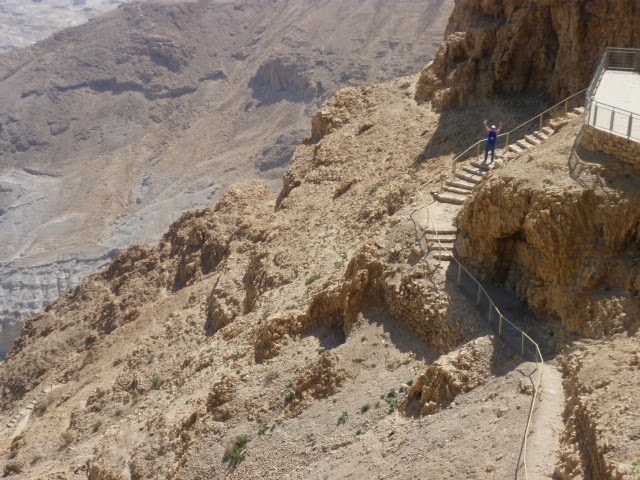 The alternative way to Masada is by a treacherous and long walk up the snake filled, winding path. Kudos, Phillip! 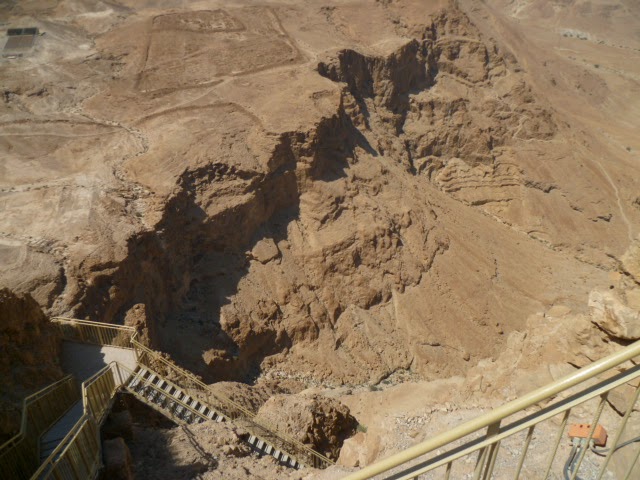 From these dizzying heights the last holdout of Jews fended off the Roman governor Flavius Silva (played by Peter O’Toole) in 73 A.D. 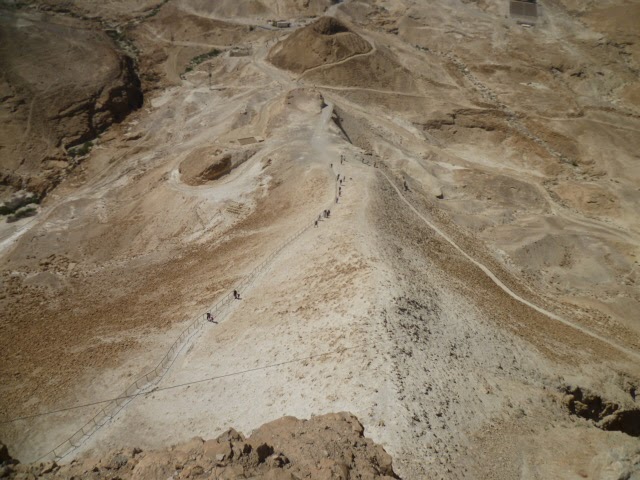 The Romans spent months building a siege ramp to get up to Masada. The Jews who had plenty of water from cisterns and food from their high perch mocked the dehydrated Romans. In the end, rather than be turned into slaves, the Jews committed mass suicide. The Roman victory was turned into defeat. 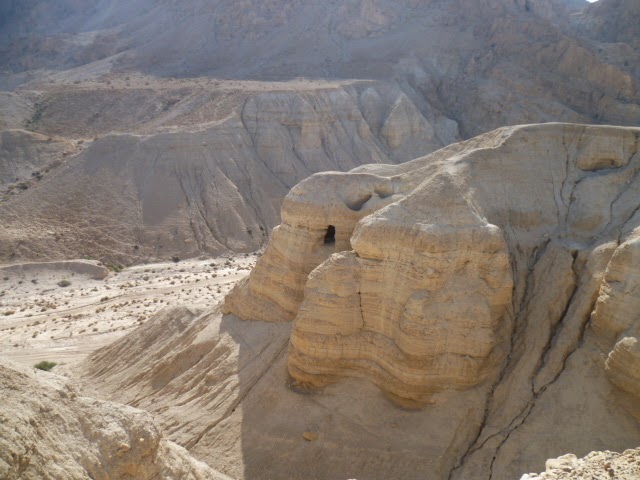 The caves of Qumran, where the Dead Sea Scrolls where discovered. All Old Testament books but Esther were found. It was the greatest archeological discovery of the 20th Century and proved that the Bible you have today has been divinely protected in the copying process over the millennia. 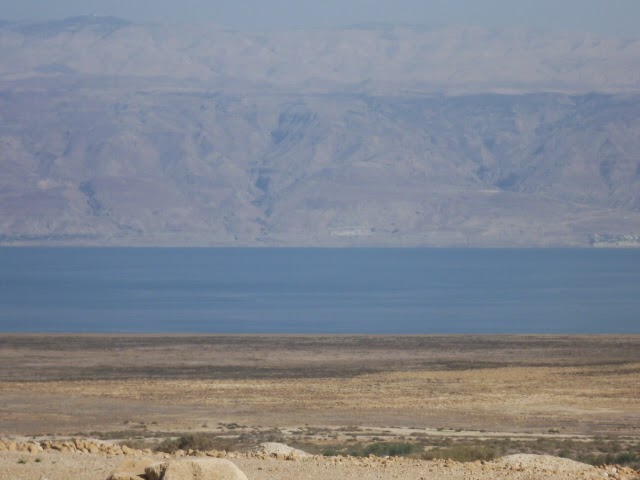 This view of the Jordanian side of the Dead Sea shows how fast the water has receded over the years as both Israel and Jordan use the water from the Jordan River that feeds the sea. 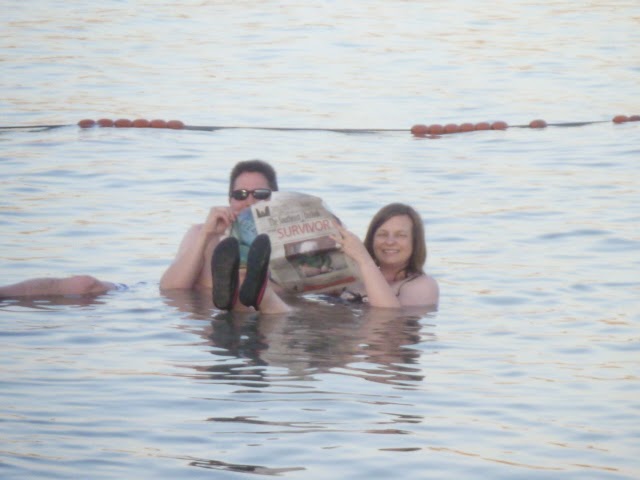 The waters are so full of minerals that people just float on the water’s surface. The super salty mud is actually a skin curative, as long as you don’t get it in your eyes, that is.

Everything we saw today – the death, destruction, desperation and desolation – will all be erased by Jesus Christ’s return and reign. The Dead Sea is therefore also a living testament that, though our lives begin desolate by sin and death, Jesus can give us life by having a saving relationship with Him.

Tomorrow for Day 10 we will honor the dead who gave their lives to make Israel a nation once more.