The Revival of the Hebrew Language: Part 7 of 8 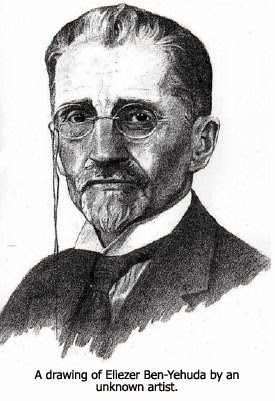 What work went into Ben-Yehuda creating the Hebrew dictionary?

One of Ben-Yehuda’s greatest achievements was his creation of a dictionary of the Hebrew language. He began the project by creating a new word for “dictionary.” The expression people had been using was sefer millim, which meant “book of words.” He shortened this to one word, millon.58

Ben-Yehuda spent most of his life searching for ancient Hebrew words that had been lost. He also sought to find the origin of words and examples of their usage, as well as their changes in meaning throughout the centuries. He scoured libraries all over Europe and the Middle East. And when he moved to the United States during World War I to escape Turkish persecution, he spent 4 years searching the great libraries of this nation which were located in the Northeast.59

When he fled Palestine in 1914, he had already accumulated about 450,000 notes. He packed them up and turned them over to the American consulate in Jerusalem for safe-keeping.60 Those notes were taken from over 40,000 books he had consulted that had been written over a period of more than two thousand years.61

What he sought to produce was much more that what we think of as a dictionary. His goal was no less than an encyclopedia of the Hebrew language. He provided definitions of each word in Hebrew, French, German and English. He identified the origin of each word and provided its sister words in other Semitic languages. He provided synonyms and antonyms. He traced the changes in the meaning of the word through the centuries. And he provided overwhelming examples of the use of the word in sentences to help the reader see how to use the word in conversations.62 For example, the dictionary provided 335 expressions for the word lo, which means “no,” and 210 for ken, which means “yes.”63 The first volume, published in 1908, covered only the letters aleph and beth.64 There are 22 letters in the Hebrew alphabet, of which five have different forms when used at the end of a word.

By 1917, Ben-Yehuda had made such progress on his dictionary and with his effort to resurrect spoken Hebrew from the dead, that he changed the motto on his wall to read: “My day is long; my work is blessed.”65

Later that year, a dream of his came true. The British issued the Balfour Declaration in November, proclaiming their intention after the war to make Palestine a home for the Jewish people. The next month the city of Jerusalem fell to the Allied Forces, liberating the city from 400 years of Turkish rule.

Ben-Yehuda responded to these momentous events with a paraphrase of Psalm 126: “T’was like a dream when the Lord restored Zion from its bondage.”66

His greatest victory came in 1921 when the British government recognized three official languages for Palestine: English, Arabic and Hebrew. Postage stamps were issued in Hebrew for the first time ever, anywhere in the world.

By 1922 five volumes of his dictionary had been published, and he had finished writing volumes 6 and 7. His work had received worldwide acclaim.

On December 14, 1922 he finished working on the word nefesh,” meaning “soul” or “spirit.” The next day was Friday, Sabbath eve and the second day of Hanukkah. He told his wife that the next word he would be working on meant “take a breath,” and he took that as a word from the Lord that he should take the day off and rest over the Sabbath.67

He spent the day walking around his beloved city of Jerusalem. When he returned home, he turned pale and his breathing became labored. He laid down on a sofa to rest, and his wife sent word for doctors. Before long the word had spread all over Jerusalem that he was seriously ill, and the house quickly filled with doctors, city officials and friends.

Ben-Yehuda seemed to have drifted into a coma, but he suddenly raised up on an elbow, looked around the room and said, “Speak Hebrew!” Later, he called for his wife. She asked him if he felt better. His reply was, “Hebrew makes me rest.”68 Those were his last words. He was 64 years old.