The Revival of the Hebrew Language: Part 6 of 8 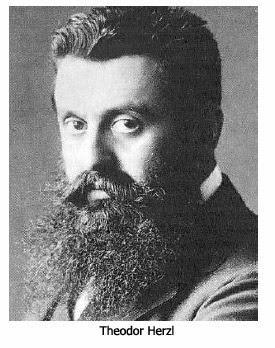 What was the opposition and support for Ben-Yehuda’s mission to revive Hebrew?

Opposition to Ben-Yehuda’s efforts never let up during his lifetime. The Orthodox were unrelenting in their efforts to prevent their holy language from becoming a secular tongue.47

At one point, the Ashkenazic leadership went to the Ottoman rulers and accused Ben-Yehuda of treason, based upon a passage in his newspaper which they had purposefully mistranslated. This resulted in his arrest, trial and conviction. And although he was released on bail, pending an appeal, he was prohibited from publishing his newspaper. He was delivered from this ordeal by Baron Edmond de Rothschild (1845-1934), a French philanthropist and supporter of Zionism, who paid bribes to the prosecutors and judges.48 During this legal crisis, Ben-Yehuda and his family were formally excommunicated by the Ashkenazic leaders.49

Opposition from secular Jews was not so passionate, but it was also persistent. It came mainly in the form of a lack of interest. After all, most of the Jews who formed the nucleus of the Zionist Movement in the 1890s and early 20th Century were Humanists, Socialists, or Communists, and most were Atheists or Agnostics. They had no interest in speaking a biblical language.

Theodor Herzl (1860-1904), considered to be the father of Zionism, is a good example. He was a thoroughly secular person. He considered Hebrew to be “unfeasible,” and preferred German instead.50 Other Zionists advocated Yiddish.

Ben-Yehuda was a great admirer of Herzl and traveled to meet him personally several times, but he could never seem to catch up with him. He finally was able to meet Herzl in 1898 when he came to Palestine to confer with Kaiser Wilhelm II during the German leader’s visit to the Holy Land. Herzl showed a complete lack of interest in Ben-Yehuda’s ideas. That evening, Herzl wrote in his diary:51

I also met a young fanatic who tried to convince me that what our movement needs is to adopt Hebrew as our national language. It is, of course, ridiculous!

Throughout all the stress and strain of living in a harsh environment while battling a deadly disease and fighting constant battles to achieve what seemed to be an impossible task, Ben-Yehuda was supported and constantly encouraged by two remarkable wives.

The first was D’vorah who bore him five children while helping him edit his newspaper. She suffered quietly as she was scorned by neighbors and rarely had enough money to put food on the table. Ben-Yehuda always referred to her as “the first Hebrew mother in two thousand years” because she was the first to give birth to children who grew up speaking Hebrew as their native language.52 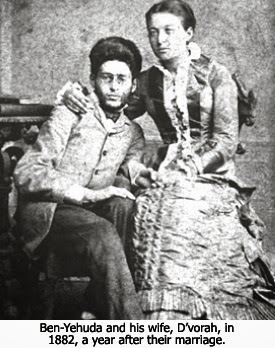 D’vorah contracted her husband’s tuberculosis and died rather suddenly in 1891 at the age of 37. Ben-Yehuda’s words of honor for her, which he published a week later in his newspaper, consisted simply of a quote from Jeremiah 2:2 — “I remember you, the kindness of your youth, the love of your espousals, when you went after me in the wilderness, in a land that was not sown.”53

Ben-Yehuda’s grief was compounded two months later when his three youngest children died during a flu epidemic.54 He was 33 years old, and he desperately needed consolation and help.

Once again, the help came from the Jonas family. Shortly before her death, D’vorah had written to her younger sister, Paula, asking her to take her place as Ben-Yehuda’s wife.55 Solomon Jonas and his wife were appalled by the request since they considered it to be a death warrant for another daughter. But like her older sister, Paula could not be deterred. She had always loved Ben-Yehuda, and she considered it her destiny to take her sister’s place and assist him in the accomplishment of his monumental task. She was only 19 years old, so her entire family decided to go with her and make Aliya!56

Paula wrote to Ben-Yehuda with the news and requested that he send her a list of possible Hebrew names for herself. Like her sister, she desired to change her name. Ben-Yehuda sent the list and she picked the name of Hemda, not because she liked the way it sounded, but because of its meaning: “beloved or cherished.”57

Hemda proved to be every bit as faithful, resourceful, supportive and helpful as D’vorah had been. During her 30 years with Ben-Yehuda (1892-1922). She bore him 6 children. She toured all of Europe several times raising financial support for his research and writings. And she was the one who found a prestigious German publisher for his dictionary.

In the seventh segment on the amazing prophetic fulfillment of the return of the Hebrew language, we’ll look at the work Ben-Yehuda put into creating the Hebrew dictionary.