Prophecy in the Psalms: The Neglected Prophecies

When teaching on the importance of Bible prophecy, one of the points I always mention is the quantity of prophecy that the Bible contains. I stress that anywhere from one-fourth to one-third of all the Scriptures are prophetic in nature, and that fact alone should be sufficient to compel our study of prophecy. I then remind my audience that we are told in 2 Timothy 3:16-17 that “All Scripture is inspired by God and profitable for teaching, for reproof, for correction, for training in righteousness; so that the man of God may be adequate, equipped for every good work.” And “all Scripture” certainly includes prophecy.

Getting back to the quantity of prophecy, consider the fact that one out of every 25 verses in the New Testament have to do with the Second Coming of Jesus. And the Gospels are full of prophecies about Jesus’ death, burial and resurrection.

In the Old Testament, we immediately think of the Major and Minor Prophets — a total of 16 books. But these books are not the only ones in the Hebrew Scriptures that contain prophecy. Major prophetic passages can be found in the history books, a good example being Deuteronomy 28-30 where Moses prophecies that the Jewish people will one day be scattered worldwide and they will be persecuted wherever they go, but they will be preserved and regathered to their homeland.

Perhaps the most overlooked area of the Old Testament with regard to prophecy is the book of Psalms. It’s a major repository of Messianic prophecies concerning both the First and Second Advents of the Messiah. Some are direct and clear. Others are indirect and subtle.

Most scholars acknowledge that 16 of the Psalms are distinctly Messianic in nature. They are listed below in Figure 1. 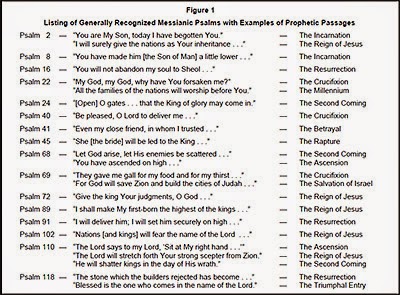 Together, these 16 Messianic Psalms present a panoramic survey of the First and Second Comings of Jesus. Figure 2 presents passages from these 16 psalms arranged in chronological order according to the events in the life of Jesus. 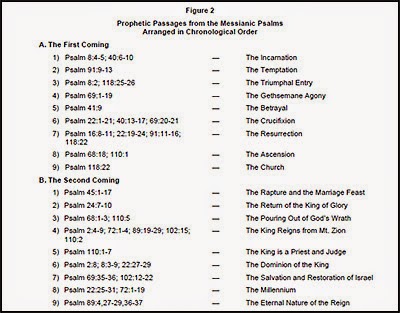 The Messianic prophecies in the Psalms are by no means limited to the 16 which are referenced above. I would add the following 17 Psalms to the list as ones that are obviously Messianic in nature, relating to the Lord’s Second Coming:

The addition of these 17 Psalms gives us a total of 33 Messianic Psalms. But even these 33 do not exhaust the rich treasure of prophetic material that is contained in the Psalms. In fact, the fundamental prophetic theme of the Psalms is not even reflected in any of the Messianic Psalms thus far identified.

In the second part of this series on prophecy in the Psalms, we’ll look at the prophetic themes found in that book.