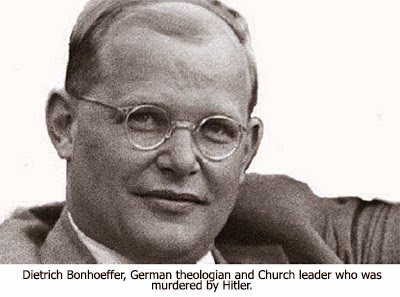 In Lutzer’s book, “When A Nation forgets God,” he begins by asserting that “Yes, Nazi Germany has some lessons to teach us.” Following up on that observation, he writes:

I am aware, of course that parallels between Nazi Germany and the United States can easily be overdrawn, but this danger should not stop us from learning some hard lessons from that dark period when the Church struggled to find its identity and had to suffer for what it believed… those similarities are happening before our eyes…

Nazism did not arise in a vacuum. There were cultural streams that made it possible… Some of those streams — myths accepted by the masses — are in evidence in America today, and hence this book… there were circumstances and widely accepted ideas that enabled the population to become a part of an evil that was greater than that of any individual. The gas ovens were the end result of certain political and religious trends that made the horrors possible. 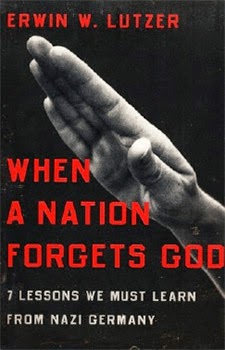 Lutzer then illustrates his point with a quote from the writings of Viktor Frankl (1905-1997), the famous psychoanalyst who was a Holocaust survivor:

The gas chambers of Auschwitz were the ultimate consequence of the theory that man is nothing but the product of heredity and environment — or as the Nazis liked to say, “Of blood and soil.”

Today we face cultural pressures that are forcing us to combine Christ with other religions, or to combine Christ with a political or ideological agenda. The experience of the Church in Nazi Germany reminds us that Christ must always stand alone; He must be worshiped not as One who stands alongside the governmental leaders of this world, but as standing above them as King of kings and Lord of lords.

Whether it’s Nazism, Marxism or Secularism, the state is always in conflict with religious freedom.

Following this disturbing introduction, Lutzer launches into the heart of his book by outlining seven lessons he believes Americans need to learn from Nazi Germany. The seven are listed below, with a quote from each section.

1) When God is separated from government, judgment follows.

And so it was that secularism was imposed on the German people. The role of the Church was minimized by privatizing faith and instituting laws about what could or could not be said from a pulpit.

When given a choice, most people probably will choose bread and sausage above the free market and individual liberties.

When God is separated from government, we are forced to accept arbitrary laws. Either God is the lawgiver or Man is; either we derive our laws from theistic universal values, or we say that the individual countries or cultures are the lawgivers. Either God is supreme or the state is supreme… a court can make abortion legal, but it cannot make it moral… Show me your laws and I will show you your God.

4) Propaganda can change a nation.

Perhaps the most enduring lesson of Nazi Germany is that ordinary people, simply concerned about living their own lives, can be motivated to become a part of an evil movement through the power of compelling propaganda, intimidation and mass euphoria.

5) Parents — not the state — are responsible for a child’s training.

Today’s law in Germany that makes home schooling illegal reminds us of a Nazi-era law instigated by Hitler back in 1938. He declared that public education was compulsory and that children could not be educated in the home. The state, not the family or the Church had first dibs regarding the child’s education.

6) Ordinary heroes can make a difference.

“When God calls a man, He bids him come and die,” wrote Dietrich Bonhoeffer during the dark days when the Church in Germany was being Nazified. And at the age of 39, he practiced what he preached; he was hanged on the gallows and died…

Today in America we need an army of ordinary heroes to stand against the gathering darkness in our land. We need people who will stand for truth courageously, consistently, and with humility and grace.

7) We must exalt the Cross in the gathering darkness.

… without the Cross we pound a nail in our coffin! There is a danger that we become so overburdened with social/political agendas that our message is lost amid our many cultural skirmishes. The Church has always faced the temptation to modify the Gospel or make it secondary to a given political, philosophical or cultural agenda… God is neither Republican nor Democrat. When the Cross is wrapped in the flag of a political party, it is always distorted or diminished.

Lutzer points out how we as Christians have allowed the culture to divert our eyes from Jesus onto ourselves:

In the evangelical community, psychology is substituted for theology and cheap grace has replaced what Bonhoeffer described as “costly grace.” In short, we have lost our intellectual and spiritual center and replaced it with consumerism, self-help and the quest for personal advantage. We are self-absorbed rather than God-absorbed. And we can see the results.

In the fifth and last part of this series on Hitler’s Nightmare, I’ll explain where the potential for evil lies.