We need to keep in mind that the potential for the evil of Hitler resides in all of us. The Bible states that “the heart is more deceitful than all else and is desperately sick” (Jeremiah 17:9). Jesus affirmed this when He asserted that all evil — both thoughts and actions — come out of the heart (Matthew 15:19-20 and Mark 7:20-23). Over and over the Bible asserts that the nature of Man is evil and should never be trusted (Psalm 53:1-3, Psalm 118:8-9, and Romans 3:10-12).

This fundamental truth about the nature of Man was reflected in the most surprising quotation I ran across while doing research for this article. I found the quote in the writings of Charlie Chaplin’s son, Charles Jr. He says that in 1940 while his father was filming his parody of Hitler, “The Great Dictator,” he was “haunted” by the similar backgrounds of Hitler and himself. He explains:

Their desires were poles apart. One was to make millions weep, while the other was to set the whole world laughing. Dad could never think of Hitler without a shudder, half of horror, half of fascination. “Just think,” he would say uneasily, “he’s the madman. I’m the comic. But it could have been the other way around.” 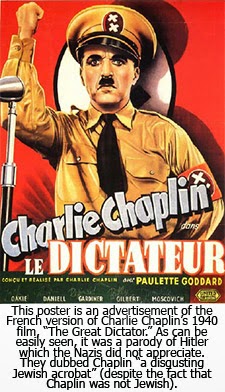 That profound insight is true of all of us. We are born with a fallen sin nature. We have to learn the difference between good and evil. That knowledge comes from God’s Word, and we learn it either from our parents or from the Church, or both.

When God is ejected from society and the Church is either marginalized or suppressed, evil is let loose, and “God gives the society over to a depraved mind” (Romans 1:28). That’s where we are in America today.

We are literally begging for the fate of ancient Judah when that nation turned against God and refused to repent, despite the infliction of many remedial judgments and the warnings of prophets. Some of the saddest words in the Bible, recorded in 2 Chronicles 36:15-16, describe what happened:

Getting Acquainted with Erwin Lutzer

Erwin Lutzer was born in 1941 in Canada and grew up on a farm near Regina, Saskatchewan. He earned a Bachelor of Theology degree from Winnipeg Bible College and then proceeded to Dallas, Texas to study at Dallas Theological Seminary where he earned a Master of Theology degree. Later he received a degree in philosophy from Loyola University in Chicago. While he was a student at Dallas Theological, he met his wife, Rebecca.

In 1980 he succeeded Warren Wiersbe as senior pastor of The Moody Church in Chicago and has served there in that capacity ever since. He is an award-winning author of more than twenty books, a celebrated international conference speaker, and the featured speaker on three radio programs: The Moody Church Hour, Songs in the Night, and Running to Win. These programs are available on the Moody Broadcasting Network, the Bible Broadcasting Network, Trans World Radio and many Christian radio stations around the world.

He and his wife, Rebecca, live in the Chicago area and are the parents of three married children. They have seven grandchildren.

Pastor Lutzer’s parents were born and raised in the Ukraine in a German-speaking community. When World War I broke out in 1914, the Russian government began persecuting all people of German heritage living within its borders. His mother’s parents fled to Siberia; his father’s family went to Afghanistan. Both families ultimately migrated to Canada, and that’s where his parents met – at church.

A few years ago I was invited to be a co-speaker with Pastor Lutzer at two conferences held in the state of Illinois. I looked forward to meeting him personally, and I decided to do some research about his background. In the process I discovered that his father was 106 years old, and his mom was 100! I mentioned this when I met him, and he said it was true at the time the article was written, but that his dad had since died.

He then began chuckling to himself. I asked what was so funny. He said he was thinking about something his father told him shortly before he died. “Son,” he said, “your mom and I were talking the other night about how long we have lived, and in the process, it occurred to us that most of our dear friends in Christ died 30 or more years ago. And that’s when we realized that by now, they must have all come to the conclusion that when we died, we went to Hell!”