Prophetic Craziness: Why All the Huksterism? 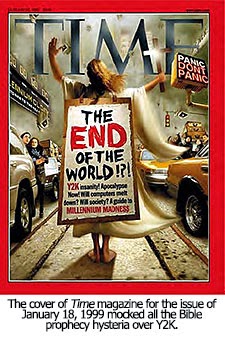 There are times when I am embarrassed to be a Bible prophecy teacher and preacher, and those times are becoming more frequent.

I am reminded of something that happened to me back in the late 1990s. As we approached the beginning of the new century, the Bible prophecy sensationalists began to crank up their propaganda mill. Accordingly, they began to predict a “Y2K Disaster” (Y2K being an abbreviation for “Year Two Thousand”).

One very well known Bible prophecy expert warned of the impending collapse of all the electrical grids due to the fact that computers had not been programmed for dates in the new year of 2000. He argued this would result in national chaos, with riots everywhere. He advised that Christians should buy land in remote areas, build concrete bunkers, and stow away food, water, money and guns.

Another equally well known prophecy author wrote a book about the impact of Y2K in which he listed 42 electrical gadgets that would likely cease operating at the turn of the century. Almost every electrical device in the average home was on the list, from alarm clocks to washing machines.

When I read that ridiculous book, I decided the time had come to write a counter-article. I was not a technical expert, but I had enough common sense to know that my toaster could care less what year it was!

I did a lot of research on the subject, and in the December 1998 issue of this magazine I published an in-depth article about Y2K in which I concluded that it was most likely that it would have no discernable impact whatsoever.

At about the same time, I got a phone call from a person who was putting together a major Bible prophecy conference concerning Y2K. He had already lined up some big name speakers. He asked if I would agree to be one of the speakers. I responded by asking him if he knew where I stood on the issue.

“Well,” I replied, “I don’t think Y2K is going to have any impact at all, nor do I believe it has any prophetic significance.”

There was a long awkward pause.

“In that case,” he responded, “I don’t think we want you to be one of the speakers.”

The organizers of that conference were not looking for truth. They were seeking sensationalism.

Adding to the Y2K hysteria was the fact that a lineup of the planets was scheduled to occur on May 5, 2000.

Some prophecy spokesmen went bonkers over this cosmological event, warning that it would alter the gravity of our planet, producing “killer earthquakes” and “massive tidal waves that would sweep across entire continents.” Well, the lineup came and went, and hardly a whimper was heard nor a tremor felt.

Why is it that rumor-mongering is so prevalent in the field of Bible prophecy? Well, for one thing, it sells books and tapes. Sensationalism appeals to the carnal nature of Man. People love to speculate about the future, and millions of others love to read the speculations.

Some of it is Satan inspired. Satan hates Bible prophecy. After all, it predicts his ultimate destruction and Jesus’ ultimate triumph. So, Satan tries to undermine respect for Bible prophecy by motivating silly and hysterical speculations by Bible prophecy teachers.

These speculations then create the impression that Bible prophecy is nothing but a playground for fanatics. This motivates many Christians to wash their hands of the whole field and to turn their backs on God’s Prophetic Word.

In the second part of this series on prophetic craziness, I’ll debunk some of the latest sensationalist crazes.