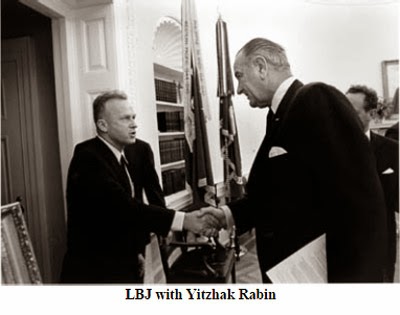 Lyndon Johnson quickly emerged as one of the greatest friends of Israel among modern day presidents — so much so that he has often been referred to as “America’s first Jewish President.”19 Soon after taking office in the aftermath of John F. Kennedy’s assassination in 1963, Johnson told an Israeli diplomat, “You have lost a very great friend, but you have found a better one.”20 During his administration, the U.S. became Israel’s chief diplomatic ally and primary arms supplier.

Long before he became President, Johnson had established himself as a friend of the Jewish people. In 1938, when he was a Congressman, he worked covertly to establish a refuge in Texas for European Jews fleeing Nazi Germany. In the process, he helped hundreds of European Jews enter Texas through Cuba, Mexico and South America.21

In part, Johnson was influenced in his attitude towards the Jews by the religious beliefs of his family, especially his grandfather (Samuel Ealy Johnson, Sr.). He once reported that his grandfather had said to him, “Take care of the Jews, God’s Chosen People. Consider them your friends and help them any way you can.”22

Johnson was further influenced by a visit he made to the Dachau death camp in June of 1945. His wife, Lady Bird, later recalled that when her husband came home, “he was still shaken, stunned, terrorized and bursting with an overpowering revulsion and incredulous horror at what he had seen.”23

When asked by Soviet premier, Alexei Kosygin, why the U.S. supported Israel when there were 80 million Arabs and only 3 million Israelis, Johnson replied, “Because it is the right thing to do.”25

LBJ also closely supervised the crafting of UN Resolution 242 in 1967 which called for Israel to be guaranteed “secure and recognized boundaries.”26

President Nixon is considered today to have been anti-Semitic, based upon ugly statements he made about the Jews that are contained on the infamous White House tapes. But when it came to Israel, he was a realist in foreign policy who recognized the importance of the only democratic state in the Middle East. 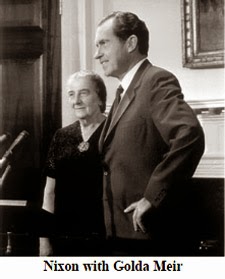 And when Israel suffered a surprise invasion in the 1973 Yom Kippur War, Nixon responded immediately with overwhelming aid to counter the offensive.27 He did so despite the fact that he knew it would alienate the Arab World and greatly endanger our relationship with the Soviet Union.

In short order, the U.S. supplied $2.2 billion worth of aid that totaled 22,000 tons of equipment that was transported to Israel in 566 round-the-clock flights. Another 90,000 tons arrived by sea.28

To this day, Nixon is greatly admired by the Israelis “as the man who saved Israel.”29

Golda Meir, who was the Israeli Prime Minister during the war, wrote her sister a letter in which she said: “Look, Clara, you’re an American. You don’t like Nixon. I’m an Israeli. I’ll never forget that if it hadn’t been for Nixon, we would have been destroyed.”30

During his short three year tenure in the presidency (1974-77), President Ford took a hard line stance toward Israel, demanding that they withdraw from the Sinai which they had reconquered during the Yom Kippur War.

Ford’s letter to Prime Minister Yitzhak Rabin was so threatening, that it prompted a response from 76 Senators in which they called on the President to “make it clear that the United States, acting in its own national interests, stands firm with Israel.”31

Nonetheless, when the Israelis continued to stall in response to his demands, Ford put the brakes on an Israeli request for F-15 fighter planes and froze all scheduled deliveries of arms.32

President Carter put the Sinai issue on the front burner when he assumed the presidency, and in 1979 he was able to broker a deal between Israel and Egypt which provided for a complete withdrawal of Israel from the Sinai Peninsula.33 “Not since Theodore Roosevelt’s efforts to end the Russo-Japanese War in 1905 had a president so effectively mediated a dispute between two other nations.”34

Unfortunately, in recent years, Carter’s writings have revealed that he is a vehement anti-Semite who detests the Israelis.35 And thus when the 2014 war between Israel and Hamas broke out, Carter denounced Israel and called for the international recognition of Hamas.36

In the third part of this series on the historical relations between the USA and Israel, we’ll see how other presidents handled or mishandled Israel.

22) Jason Maoz, “Lyndon Johnson, Friend of the Jews,” Commentary magazine, August 22, 2008, www.commentarymagazine.com/2008/08/22/lyndon-johnson-friend-of-the-jews, page 2. Much of the information about Johnson’s pro-Jewish activity in his early years has been gleaned by scholars from an unpublished 1989 doctoral dissertation at the University of Texas by Louis Gomolak entitled, “Prologue: LBJ’s Foreign Affairs Background, 1908 – 1948.”

29) Roger Stone, “How Nixon Saved the State of Israel,” www.lewrockwell.com/2014/08/roger-stone/nixon-on-jews-and-israel.