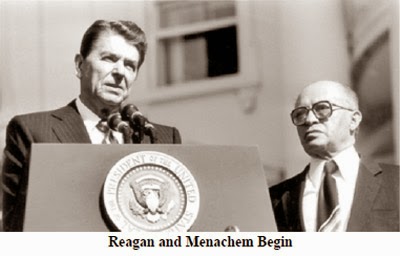 Ronald Reagan has the reputation of being the most pro-Israel president in American history. Much of that reputation is based on glowing words that he often spoke in support of Israel. For example, in September 1982 in a foreign policy speech about the Middle East he said:37

Israel exists and it has a right to exist in peace behind secure and defensible borders. And it has the right to demand of its neighbors that they recognize those facts. I have personally followed and supported Israel’s heroic struggle for survival every since the founding of the state of Israel. In the pre-1967 borders, Israel was barely 10 miles wide at its narrowest point. The bulk of Israel’s population lived within artillery range of hostile Arab armies. I am not about to ask Israel to live that way again.

But despite words like these, Reagan had a number of runins with Israel.38 For example, in 1981 he significantly strengthened the Arabs by selling them some of our most sophisticated weapons. He did this despite great opposition by both the Israelis and the Israeli lobby in the Congress.39 And when the Israelis bombed the Iraqi nuclear reactor in 1981, Reagan supported the UN Security Council resolution that condemned Israel.40 On the other hand, in 1985 Reagan began to provide Israel with $3 billion in foreign aid annually, all in the form of grants.41

When Israel launched the war in Lebanon in 1982 to clear the PLO out of the country, Reagan initially supported it, but he soon soured on the operation. He pressured the Israelis to end it, and he helped arrange for Arafat and the PLO leadership to escape into exile in Tunisia.42

More significantly, in 1988 Reagan authorized the State Department to enter into dialogue with the PLO, reversing the U.S. policy of refusing to recognize terrorist organizations.43

Reagan and Menachem Begin had a particularly rough relationship. Reagan was infuriated when he was not informed in advance of the Israeli attack on the Iraqi nuclear reactor in 1981, and that same year chastised Israel for annexing the Golan Heights. In response, Begin accused Reagan of treating Israel like a “banana republic.”44

The First Bush presidency proved to be the decisive turning point in US-Israel relations. Bush came to power in 1989, and he had hardly assumed office before his anti-Semitic Secretary of State, James Baker, proclaimed that the time had come for Israel to “abandon its expansionist policies.”45

Bush added fuel to the fire when he announced in 1991 that he considered East Jerusalem to be “occupied territory,” despite the fact that Israel had officially annexed it in 1980.46

Following the Gulf War in 1991, President Bush decided to pursue an Arab-Israeli settlement by convening an international conference in Madrid, Spain. He forced the Israelis to attend by making their participation a condition for the U.S. to provide $10 billion in loan guarantees to the World Bank. Israel needed the money to deal with an overwhelming influx of immigrants from the Soviet Union.47

This conference laid the groundwork for the Oslo Accords in 1993 which initiated the Land-for-Peace process whereby Israel would surrender land in exchange for promises of peace.

I think it is interesting to note that after James Baker completed his service as Secretary of State in 1992, one of the first things he did was to establish a think tank at Rice University called the Baker Institute for Public Policy. And who did he honor with a speaking invitation? Yassar Arafat. To me, it was like inviting Hitler to speak.48

President Clinton positioned himself as a strong friend of the Jewish people and the nation of Israel. Never before in history did Jewish Americans play such a significant role in a presidential administration. Clinton had five Jews in his Cabinet, he appointed two Jews to the Supreme Court, and many other Jews served in key positions.49

Clinton provided Israel with substantial financial aid, but he worked constantly behind the scenes to convince Israel to trade land-for-peace.

He presided over the signing of the Oslo Accords at the White House in September of 1993. It was these agreements that launched the land-for-peace concept, starting with the Israeli withdrawal from Jericho.50

In 1998 Clinton hosted the Wye River Conference between Arafat and Netanyahu which resulted in Israel agreeing to withdraw from the ancient Jewish city of Hebron.51

And in 2000 Clinton convened the Camp David Conference between Arafat and Israeli Prime Minister Ehud Barak — the most liberal prime minister in Israel’s history. Barak agreed to give Arafat all that he had ever demanded in diplomatic circles, and to the astonishment of all present, Arafat responded by getting up and walking out of the room. He immediately flew back to Israel and launched the Second Intifada.52

In the fourth part of this series on the historical relations between the USA and Israel, we’ll see how modern presidents handled or mishandled Israel.