We have been involved in World War III ever since the 9/11 attacks in 2001. We need to face up to that fact, and we need to acknowledge who the enemy is. And that enemy is not terrorism.

Our enemy in World War III is not terrorism — that is simply the method of warfare that our enemy is using. Our real enemy is not even “Islamic Fundamentalists” or “Radical Muslims.” Our enemy is Islam.

Islam is and always has been a religion of the sword. Mark Gabriel, a former Muslim and former professor of Islamic history at Al-Azhar University in Cairo, says, “The history of Islam is a river of blood.”

The very word, Islam, means “submission” or “surrender.” The Quran calls upon Jews and Christians to submit to Allah or else face death. Submission without conversion is possible only by paying a heavy tax, called jizya.

The politically correct idea that “Islam is a religion of peace” is downright laughable, as illustrated below in the editorial cartoon by Rick McKee of the Augusta Chronicle. 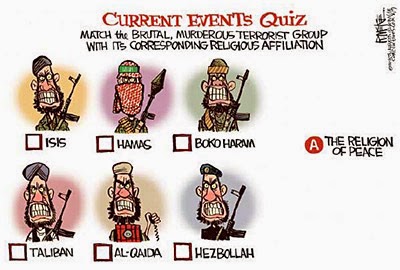 When Ronald Reagan was president, he did not hesitate to clearly define our enemy. Speaking to The National Association of Evangelicals in March of 1983, he proclaimed, “There is sin and evil in the world, and we’re enjoined by Scripture and the Lord Jesus to oppose it with all our might.” He then proceeded to identify our enemy as the Soviet Union, which he called “the evil empire.” Liberals went nuts, claiming he was being “provocative.” No, he was being realistic and truthful, and he proceeded to bring that evil empire to its knees.

Our current president needs to follow Reagan’s example and face up to recognizing the enemy who wants to destroy us and Christianity.