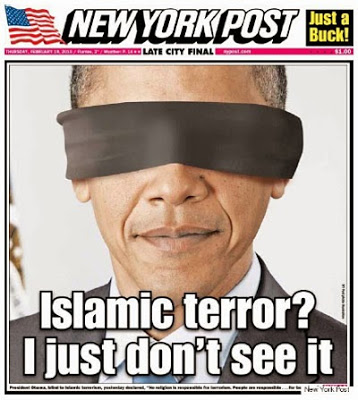 While Muslim terrorists continue to launch assaults all over the world, President Obama continues to deny that their actions have anything to do with Islam.

At a press conference in February, Obama refused to describe the Islamic State and Al-Qaeda as groups motivated by “radical Islam” because the term grants them a religious legitimacy they don’t deserve. “They are not religious leaders,” he stated, “they are terrorists.” He then added, “We are not at war with Islam. We are at war with people who have perverted Islam.”

But the President’s comments were not as laughable as those of the State Department spokesperson, Marie Harf, who tried to convince Chris Matthews on his MSNBC television program that ISIS is motivated by poverty and the need for jobs. Even the super-liberal Chris Matthews was stunned, and keep in mind that he was the one who said in 2008 that every time he heard Obama speak on the campaign trail that he got goose bumps up and down his legs! Matthews responded to Harf with a barrage of blistering criticism, claiming the White House is “allowing America to be humiliated.”

The stroll through Alice-in-Wonderland continued a few days later when Secretary of State John Kerry appeared before a Congressional committee and declared: “Our citizens, our world today is actually, despite ISIL, despite the visible killings that you see and how horrific they are, we are actually living in a period of less daily threat to Americans and to people in the world than normally…”

What? Is he in the same world the rest of us are in?

Thankfully, the next day, the Director of National Intelligence, James Clapper tried to get us back to reality by telling the committee that 2014 was “the most lethal year for global terrorism in the 45 years such data has been compiled.”

Although willful ignorance is characteristic of liberal minds, it is not exclusive to them. Take President George W. Bush, for example. After the terrible 9/11 attacks, he hosted a White House reception during Ramadan to honor the Islam religion and its American leaders. Furthermore, he persisted throughout the rest of his Administration in calling Islam “a religion of peace.” One observer said the President’s behavior was equivalent to President Franklin Roosevelt giving a banquet following Pearl Harbor to honor the Shinto religion and Japanese leaders.

All of this bizarre denial of reality is, of course, an exercise in political correctness. It is an effort to avoid hurting the feelings of American Muslims.

It is a very misguided effort, as former New York City Mayor Rudy Giuliani demonstrated recently during an interview on Fox News. He pointed out that when he became mayor in 1994, he immediately called a press conference and announced he was declaring war on the Mafia.

He said that before the day was over, the leaders of the Italian community were in his office protesting, claiming that any reference to the Mafia was an embarrassment to them and a slur against Italian-Americans. His response? He told them in no uncertain terms that he was not backing down, and if they wanted to look good, they would give him their public support. And sure enough, at his next press conference, the Italian leaders were there, standing behind him in support.

That’s what President Obama needs to do. Rather than playing footsie with Islamic leaders, he needs to tell them to put up or shut up. He needs to insist that they start speaking out publicly against Islamic terror.