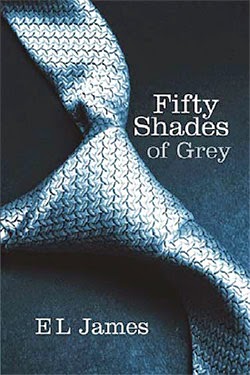 Ah, it’s that age-old love story. Boy meets girl. Boy asks girl to sign consent form. Girl agrees. Boy takes girl up to bedroom where he proceeds to remove her undies and then whip her with a…

Whoa, whoa, hold up there! That can’t be right. What happened to boy gives girl flowers, fine dining, romance and respect? What about time to get to know each other? Love even? Marriage?!? Well, you won’t find any of those outmoded forms of courtship in the modern-day “romance” novel that has swept the world by firestorm — Fifty Shades of Grey.

Shades of a Sensation

Okay, I’m a guy, so even watching anything as tame as Sleepless In Seattle or reading Jane Austen (universal male groan) is quite beyond me, so I’m not about to tackle a book and movie series aimed at 30-something married women. It’s just not in me. But, I did read the Wikipedia cliff notes, so consider me an expert as much as a guy can be concerning chick flicks.

What’s Fifty Shades of Grey? In a nutshell, it’s a story about a 21-year-old college student, Ana Steele (played by Dakota Johnson), who falls in “love” with a handsome but mysterious young billionaire named Christian Grey (Jamie Dornan) after she interviews him for a newspaper. In almost no time he’s pulling out a contract and a pair of handcuffs and… well, it’s got nothing to do with CHiPs.

The 3-book series was written in 2011 by E. L. James, a British fan of the Twilight vampire novels. She wrote the books under the pen name, Snowqueen’s Icedragon (no, seriously, I’m not making that up), as “a classic redemptive story of a very good, virginal woman taming a deeply flawed man.”1 And what a deeply flawed man Christian is! (Did she really have to name him Christian?) But anyway, Christian is somewhat of a sympathetic character in that you learn he was abused as a teen by his mother’s pedophiliac friend, but that’s the only thing about him that will bring a tear to the eye. After all, who needs love when you’re a rich stud with your own helicopter? The girls, all 15 of them, just swooned over his lavish gifts; you know, the expensive bracelets that hide all the bruise marks earned in the Red Room of Pain. Tantalized yet, Ladies?

You’d think such smut would be read in hiding, and well, distribution began that way as women in secret began downloading the e-book only version. And did it catch on! Once printed by Vintage Books, Fifty Shades sold 100 million copies and was translated into over 50 languages, making the New York Times bestseller list three months in a row. All this success despite the fact that the critics derided the book as “dull and poorly written,” “depressing” and “a sad joke.”

James made Time magazine’s 2012 “100 Most Influential People in the World.” The R-rated movie version came out just in time for Valentine’s Day 2015, smashing records globally in grossing $248 million the opening weekend. There is no doubt that the book has become a mainstream cultural phenomenon.2

Shades of a Counterfeit

Men, tear your eyes away from the game for just a second and look at your wives. Why are they reading this garbage? Gentlemen, we’re dropping the ball here in our marriages. And, look at your daughters. Who’s the role model in their lives? Do we want our little girls aspiring to becoming mindless sex slaves because we’ve been neglecting our wives?

The books sell fantasy, not reality, for money. Lots of money! The devastation that lays in the wake of Fifty Shades is a tsunami of broken, dysfunctional and sexually unfulfilled people. They’ve traded the lie of Satan for the real thing — marriage — as it was meant to be, the 1 Corinthians 13 way. Safe. Protected. Honoring. Covenantal. Selfless. Loving. Now doesn’t that sound like what Jesus Christ created for you to enjoy?