Anti-Semite is Silenced by the Church of England 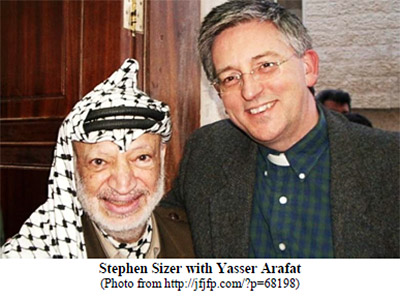 The most virulent Christian anti-Semite in the world today is Dr. Stephen Sizer. He is the vicar of Christ Church, Virginia Water, in Surrey, England. He is recognized as the international leader of a group called Christian Palestinians that has emerged in recent years.

This group gives its full support to the terrorist leaders of the Palestinian Authority and Gaza while condemning Israel as an “occupational force.” American Christian leaders who have identified themselves with the group include Presbyterian minister Donald Wagner, Baptist minister Tony Campolo, and Lynne Hybels, wife of Willow Creek Church founder, Bill Hybels. The most vocal American participant is Gary Burge, an ordained Presbyterian minister and professor of New Testament at Wheaton College.

Sizer has denounced Israel as an “apartheid state” which he claims is guilty of ethnic cleansing. In like manner, he has demonized Christians who support Israel as “heretical Armageddonites” whose interpretation of the Bible “provides a theological endorsement for racial segregation, apartheid and war.”

In January of this year, Sizer posted to his Facebook page a link to an article titled, “9/11 — Israel did it.” The article theorized that the Israeli intelligence organization, Mossad, was behind the 9/11 attacks.

That action was the final straw for his superior, Andrew Watson, the Bishop of Guildford. He issued a public rebuke of Sizer, declaring, “It is my decision that Stephen’s work in this area is no longer compatible with his ministry as a parish priest.” He further stated that he had demanded that Sizer stop speaking and writing on the issue, and Sizer had agreed to cease.

Now, my question is this: When is the administration of Wheaton College, a supposedly Evangelical institution, going to take action with regard to its professor, Gary Burge?

Apostasy in the Church   Church and Ecclesiology   Israel