The September 2015 issue of Charisma magazine featured stories on its cover about Bible prophecy. Collectively, they were billed as “The Great Convergence.”

I was glad to see a major Christian magazine feature Bible prophecy on its cover. Unfortunately, most of the articles in the magazine were devoted to sensationalist nonsense like the Blood Moons, the Shemitah, and Newton’s Riddle. These articles reflect a type of prophetic fanaticism that gives the whole field of eschatology a bad reputation.

The Blood Moon Theory pointed to September 28 as a crucial date. The Shemitah Theory singled out September 23. And Newton’s Riddle also focused on September 23. Thus, the “convergence” featured on the magazine’s cover. 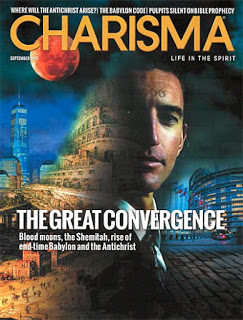 All of this proved to be “much ado about nothing.”

That was no surprise to me because it was all based on human speculations rather than biblical prophecies.

Take the Blood Moons for example. In an article we published in the Lamplighter issue of March-April 2014, I concluded that the whole Blood Moon Theory was devoid of any factual basis. The author of the theory, Mark Biltz, pointed out that four blood moons in a row over a two year period of time (called a tetrad) is a very rare phenomenon which has occurred only 87 times since the time of Christ. Even rarer is when these four blood moons fall on Jewish feast days. That has happened only eight times since the First Century.

Biltz claimed that the last three of the feast tetrads had served as omens of major events among the Jewish people, and therefore he concluded that the next one, scheduled for 2014-2015, would serve as a warning of a major event in Israel.

Now stop and think about this for a moment. The first five feast tetrads had no prophetic significance whatsoever. And what the proponents of the theory conveniently overlooked is that two of the last three really had no significance as omens of anything. The one that occurred in 1493-1494 came after the expulsion of the Jews from Spain in 1492, and the one in 1949-1950 also came after the re-establishment of Israel in 1948.

That leaves only the feast tetrad of 1967-1968 as having any significance since the Six Day War began and ended after the first blood moon in that sequence.

So, in fact, only one out of eight feast tetrads have had any prophetic significance. That’s not a good track record. And keep in mind that when you say “something important is going to happen” in Israel during any two year period of time, you are not going out on much of a limb. Nor is it true prophecy to speak so vaguely. The prophecies contained in the Bible are very specific and precise.

And then there is the ridiculous “prophecy” called Newton’s Riddle. Sir Isaac Newton, the great 17th Century scientist, interpreted Daniel’s prophecy of the 70 Weeks of Years (Daniel 9:25-27) to mean that the Tribulation would begin 49 prophetic years (360 day years) after Jerusalem is re-established as the capital of Israel. That occurred on June 7, 1967, and 17,640 days later (49 years x 360 day years) would be September 23, 2015, the Day of Atonement.

That leaves us with Jonathan Cahn’s Shemitah Theory for the crash of the American economy on September 23. As I pointed out in an article in the January-February 2015 issue of the Lamplighter, Cahn’s first error was to take a law given to Israel only (Leviticus 25:20-21) and apply it to a Gentile nation. His second error was his arbitrary decision to start his count of Shemitah years in 1917 when the Balfour Declaration was issued rather than 1948 when the nation of Israel was re-established.

He obviously chose 1917 because it enabled him to place the Shemitah years at a couple of times when the stock market crashed. In other words, his calculation of Shemitah years is manipulated. Further, one of the Chief Rabbis of Israel has declared that the Shemitah law will not even start applying to Israel again until more than half of the world’s Jews have returned to that nation.

The lesson from all this is that we need to focus our attention on the end time prophecies of the Bible and not on the fanciful speculations of men.