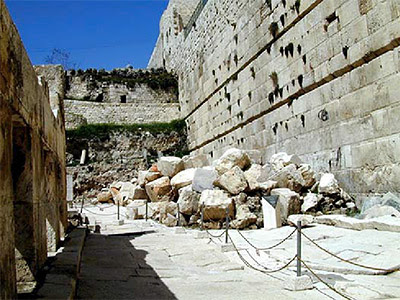 This argument is nothing but hot air. Jesus did not prophesy the destruction of the Temple complex, and the reason there is nothing left of the Temple in the City of David is because it was never there.

You can find Jesus’ prophecy in three places: Matthew 24:1-2, Mark 13:1-2 and Luke 21:5-6. In all three places it is very clear that His prophecy relates only to the buildings on the Temple Mount and not to the retaining walls around the Mount. Consider Matthew 24:1-2 —

1) Jesus came out from the temple and was going away when His disciples came up to point out the temple buildings to Him.

2) And He said to them, “Do you not see all these things? Truly I say to you, not one stone here will be left upon another, which will not be torn down.”

As you can clearly see in this passage, the prophecy relates to the Temple buildings, and not the retaining walls.

Cornuke makes a big deal out of a coin that archaeologists found at the base of the southwest corner of the Temple Mount retaining wall. He says the coin was dated 20 AD and it proves that the walls were not completed by that date. He concludes that the western wall was not built by Herod, and therefore Herod’s Temple could not have been located on the Temple Mount.

The fact of the matter is that the construction of the Temple complex continued long after King Herod’s death. John 2:20 says that the building of the Temple complex took 46 years — until about 27 or 28 AD. And recent archaeological excavations have revealed that although the Western Wall, where Jews pray today, was built in Herod’s lifetime, the southwest corner of the Temple Mount where the coin was found, was not completed until around 30 AD.14 In fact, Josephus reports that the Temple complex was still receiving further embellishments and repairs right up to the time that the First Jewish Revolt broke out in 66 AD.15

This debris is so deep that when people stand at the Western Wall (or “Wailing Wall”) today, they are actually standing 50 feet above the base of the wall where a street was located in the time of Jesus. On the eastern side of the Temple Mount, the debris is so deep that it covers the top of the ancient Eastern Gate which exists directly below the present gate.

This leads to a crucial question: If the Temple Mount was the location of the Roman fortress, why did the Roman soldiers tear down their own fortress and then go to the enormous trouble of pushing the remains over the top of the Temple Mount? It just makes no sense.

This is a photo of the eastern wall of the Temple Mount, taken from the Mount of Olives, looking west over the Kidron Valley. The red line starts at the southeast corner of the Temple Mount retaining wall, and as it moves to the right (north) it rises steeply, indicating the amount of debris that is piled up against the wall. The arrow points to the current Eastern Gate which is located on top of the ancient gate.

Since 1967, when the Israelis reconquered the Old City in the Six Day War, they have excavated the southern end of the Temple Mount. They found the steps leading up to the entrance to the Temple complex. And they uncovered huge ceremonial baths (mikvahs) which were used for spiritual cleansing before entering the Temple.

The discovery of these baths solved a mystery that appears in Acts chapter 2. That chapter records the first Gospel sermon that the Apostle Peter preached on the Day of Pentecost — a sermon he presented on the Temple grounds. We are told that 3,000 responded to the sermon and were baptized. Scholars have always wondered where that many people could have been baptized in Jerusalem. Now we know.

The Israelis have not carried out excavations on the east side of the Temple Mount because a Muslim cemetery is located there. The graves are located on top of the tons of debris that is piled up against that wall.

On the west side, they are unable to conduct excavations because buildings have been built over the debris right up to the wall. The only open space is the Western Wall where Jews go to pray, and it is considered to be a sacred and untouchable area. But excavations have been conducted at the southwest corner of the Western Wall.

In the midst of the rubble that has been left at the southwest corner of the Temple Mount is a stone that is inscribed with the words, “To the place of trumpeting.” It marks the spot at the top of the Temple Mount where the priestly trumpeter would have stood to sound the trumpet signaling the beginning and end of Sabbath days and festivals. This stone clearly indicates that the Temple Mount was a Jewish sacred place, and not the site of a Roman fortress. 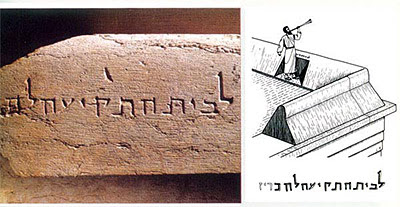 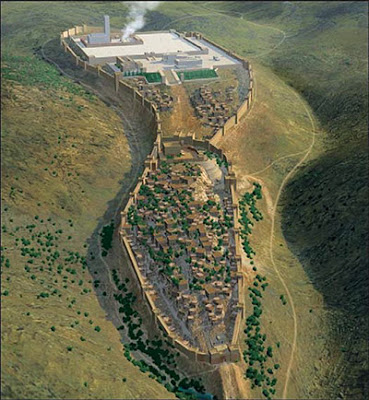 Note: An artist’s very acurate rendition of Jerusalem at the time of Solomon. The original City of David is at the bottom. The Ophel is right above it. This is the incline that leads up to the Temple Mount. The Temple is shown on Mount Moriah. The steep ravine on the right is the Kidron Valley. The Mount of Olives is to the right across the Kidron Valley. The shallower valley on the left is the Tyropoeon Valley. (Source: http://theworldnewsmedia.org/20
10%20Watchtower%20Library%20Maps.)

In the sixth and last segment, I’ll conclude with some devastating arguments against Robert Cornuke’s claim that the Jewish temples resided in the City of David.

14) Gordon Franz, “Was King Solomon’s and Herod the Great’s Temples Built Over the Gihon Springs in the City of David?: A Factual Review of Robert Cornuke’s Temple,” draft article shared with the author by Randall Price, page 19.