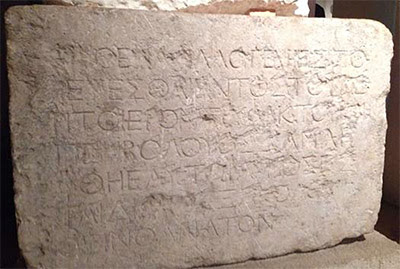 I will now finish analyzing a book written by Robert Cornuke titled, Temple: Amazing New Discoveries That Change Everything About The Location Of Solomon’s Temple. This book’s startling thesis asserts that the Jewish Temples (Solomon’s and Herod’s) were located south of the Temple Mount in the ancient City of David and that the entire Temple Mount was the Antonia Fortress where Roman troops were garrisoned.

Something Cornuke did not mention in his book is that two warning signs have been discovered that clearly indicate the Temple was located on the Temple Mount. These are signs that warned that non-Jews could not cross the stone balustrade that separated the sacred Temple area from the Court of the Gentiles. These signs are mentioned in the writings of Josephus.16

The first of these signs carved in stone was found in 1871 near the Lion’s Gate located at the northeastern corner of the Temple Mount, nowhere near the City of David. A second one was discovered in the 1930’s near the same location.17

One of the most devastating arguments against Cornuke’s theory relates to the size of the Temple platform on which the Temple sat. According to both Josephus and the Mishnah (a collection of rabbinical oral traditions), the Temple platform was 500 by 500 cubits in size. The cubit used by Solomon was the long royal Egyptian cubit which was 20.67 inches long.18 That would make the Temple platform 861 feet square.

There is simply no way that this platform could have fit in the City of David. Again, the City of David was a tiny village when David conquered it. It consisted of only 13 acres and was 400 feet wide by 1,800 feet long. The placement of a temple platform 861 feet square in the village would look like the diagram below. 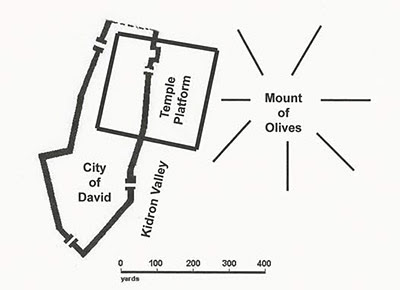 As you can see, the Temple platform would have stuck out over the deep Kidron ravine, hanging in the sky! In Cornuke’s book, he has some drawings he commissioned showing the Temple sitting in the City of David, but they are very misleading because they are not drawn to scale.

Cornuke offers some other arguments in behalf of his theory, but I have covered all the main ones.

I think it is important to note that the leaders of the Temple Mount Institute in Jerusalem are the world’s leading experts on the Jewish Temples. They have spent their lives studying the ancient manuscripts related to the Temple, and their conclusion is that “…there is no doubt that the Dome of the Rock is the location of the First and Second Temples…”19

One of Christendom’s foremost experts on the Temples, Randall Price, agrees with this conclusion. He further observes, “…while evidence of the First Temple’s construction is scarce… evidence for the Herodian Second Temple is replete, both in the original documentary sources and the archeological remains.”20 And he then points out that the Bible explicitly states that the Second Temple was built on the foundation of the First (Ezra 2:68 and 9:9).

The cover of Cornuke’s book has a superscription above the title which reads: “Could History Be So Stunningly Wrong?” The answer is a resounding “No!”

20) Randall Price, “Where Was The Temple Located?” http://www.worldofthebible.com/Documents/Where%20was%20the%20
Temple%20Located2.pdf, page 2.