Thank You, Mr. President, for Recognizing Jerusalem as Israel’s Capital (Part 1 of 4)

It will come about in that day that I will make
Jerusalem a heavy stone for all the peoples; all
who lift it will be severely injured. And all the
nations of the earth will be gathered against it.
(Zechariah 12:3 NASB)

The promises of Clinton and Bush proved to be insincere, meaningless hot air. Obama’s unwillingness to take a stand signaled that he would become the most anti-Israel president in American history. President Trump has kept his promise, and he is to be commended for doing so.

He made his proclamation on December 6, 2017. In it he stated, “This [recognition] is nothing more or less than a recognition of reality. It is also the right thing to do. It’s something that has to be done.” 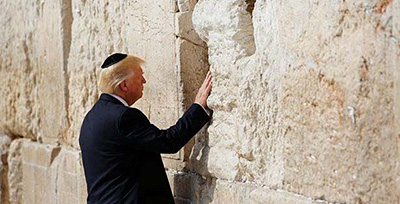 In May of 2017 Donald Trump became the first President to visit the Western Wall while in office.
(Photo from www.mirror.co.uk.)

The Jewish Tie to Jerusalem

It should also be kept in mind that when God gave the land of Canaan to the Jewish people, He gave them an eternal title to it (Psalm 105:8-11). He warned them that if they were not faithful to Him, they would be evicted from the land (Deuteronomy 28:64-67). But He made it clear in His Word that if they were ejected, they would retain their title to the land, and one day they would be regathered to it (Ezekiel 11:14-17).

During the period of their dispersion from the land, it became a barren wasteland, with malaria-infested swamps along the Mediterranean coast and in the Upper Galilee. It was a land that no one coveted except the Jewish people.

Each year, at the end of their Passover meals, Jews worldwide would pray, “Next year in Jerusalem.” And when they built their synagogues anywhere in the world, they made sure that they faced in the direction of Jerusalem.

The Return of the Jews to Their Homeland

The land of Palestine, as it was renamed by the Romans, remained sparsely populated. It was owned mainly by absentee landlords, and it was under the domain of the Ottoman Empire whose capital was Constantinople (modern day Istanbul). The people living in Palestine considered themselves to be Syrians.

When the Jewish people began to return to their homeland in the 1890s, they bought the land that God had already given them in perpetuity, and they paid inflated prices for it. The Arabs laughed all the way to the bank over the foolish Jews who were willing to purchase such worthless land.

The Arabs were unaware of a prophecy contained in Ezekiel 36:35 where God promised that when the day came for the Jews to return to their land, it would become “like the Garden of Eden.”

And that is exactly what has happened since 1948 when the Jewish state was re-established. Today, the land of Israel is the bread basket of the whole Middle East, and the Arabs now want it back.

In the second segment of my analysis of President Trump recognizing Jerusalem as Israel’s capital, we’ll examine if there is any validity to the Arab’s claim to the land.