Thank You, Mr. President, for Recognizing Jerusalem as Israel’s Capital (Part 2 of 4)

The Arab Claim to the Land

The Arabs also want the land because there is a teaching in the Islamic religion that says once a territory is conquered by Muslim forces, it forever belongs to Allah. Therefore, the Muslims of the Middle East believe they have a spiritual obligation to reconquer the land.

When the Muslim leaders of the Middle East say they want a “two-state solution,” they are lying. Their desire is not simply a separate Palestinian State. Their goal is the annihilation of Israel. Gaining a separate Palestinian State would serve only as a stepping stone toward their final attack on Israel, just as they have used their acquisition of Gaza as a launching pad for missiles.

It should be kept in mind that a Palestinian State already exists. It is called Jordan. Two-thirds of its citizens are Palestinians, and the nation occupies two-thirds of the area of Palestine that was offered to the Jewish people in the Balfour Declaration in 1917. It was only when the British became concerned about their access to Arab oil that they decided in 1921 to carve out this Arab state from the territory of Palestine.

The Jews were left with only a sliver of land (10,000 square miles) along the Mediterranean coast for the creation of a Jewish State. And they lost almost half of that sliver when the United Nations decided in November 1947 that the small piece of land left should be divided into two states — one Jewish and the other Arabic.

The Re-establishment of Israel

The Jews felt betrayed once again, but they reluctantly accepted the UN resolution and proceeded to proclaim the establishment of their state on May 14, 1948. The Arabs denounced the UN resolution, and five Arab nations attacked Israel when the Israeli declaration of independence was announced.

An important point that is usually overlooked is that the same day the Israelis declared the existence of their state, the Arabs could have legally declared the establishment of a second Palestinian state. But no, they wanted it all, so they attacked Israel, and the Israelis fought them to a standstill in the War of Independence (1948-1949). 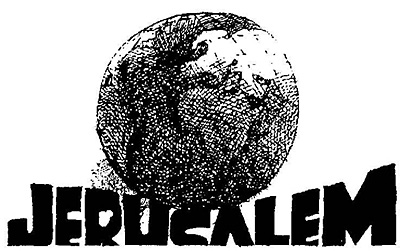 The Status of Jerusalem

Despite the fact that the Israelis controlled only the western part of Jerusalem following the War of Independence, in December of 1949, the Israeli Cabinet proceeded to declare Jerusalem to be the capital of Israel.2

This proclamation was confirmed by the Israeli parliament, the Knesset, on January 23, 1950. The parliamentary resolution affirmed that “Jerusalem was, and always has been, the capital of Israel.”3

This statement was of course, historically correct. Jerusalem had served as the national capital of the Jewish people for more than a thousand years, from the time of King David to 70 AD when the city was destroyed by the Romans and the Jews were dispersed worldwide. Thereafter, the city served as the heartfelt spiritual capital of the Jewish people until they once again acquired possession of it in 1967.

The Re-unification of Jerusalem

When the Six Day War broke out in June of 1967, the Israelis warned the Jordanians not to get involved. But they ignored the warning and attacked Israel. They were quickly defeated, resulting in Israel conquering all the Jordanian territory on the west bank of the Jordan River, including the entire city of Jerusalem.

Thirteen years following the Six Day War, which resulted in the re-unification of Jerusalem under Israeli sovereignty, the Knesset approved what has come to be known as “The Jerusalem Law.” Passed on July 30, 1980, the law declared that “Jerusalem, complete and united, is the capital of Israel.” The law also guaranteed the protection of all “Holy Places” within the city.4

The United Nations responded a month later in August with a Security Council Resolution which strongly condemned the Israeli “attempt to annex East Jerusalem.”5 It also called on all member states to reject the Israeli law and to withdraw their diplomatic missions from Jerusalem. The resolution passed 14-0, with the United States abstaining. Jimmy Carter was President at that time.

The Departure from Jerusalem

This Security Council resolution resulted in 13 embassies being moved from Jerusalem to Tel Aviv.6 All the rest of the embassies were already located in Tel Aviv. The American Embassy was established in Tel Aviv in 1949 since that was the original seat of the Israeli government. It had remained there even though the Israelis later shifted their governmental operations to Jerusalem.

In 1982, Costa Rica moved its embassy back to Jerusalem, followed by El Salvador in 1984.7 Arab nations responded by severing diplomatic, economic and cultural ties with the two countries. Since Trump’s recognition, Guatemala has announced that their embassy will be moved back to Jerusalem.8 Other nations are expected to follow.

The steadfast refusal of most of the world’s nations to recognize Jerusalem as Israel’s capital and move their embassies there is an incredible insult to the Jewish people. It is really an expression of anti-Semitism since no other nation has been treated in such a shabby way. It is equivalent to some nation saying to the American people, “We do not recognize Washington, D.C. as your capital, so we are going to place our embassy in Chicago.”

This virulent anti-Semitism is expressed regularly in United Nations resolutions condemning Israel for imagined crimes, while reckless rogue nations like Iran and North Korea are ignored. It has also been expressed in recent resolutions by UNESCO.

The following year, in May 2017, UNESCO went even further. The organization passed a resolution denying that Israel has any legal or historical rights anywhere in Jerusalem!11 And, as if to poke a finger in Israel’s eye, they passed this resolution on Israel’s Independence Day!

In the third segment of my analysis of President Trump recognizing Jerusalem as Israel’s capital, we’ll look at the U.S. Congress’ historical support of such an action.