Thank You, Mr. President, for Recognizing Jerusalem as Israel’s Capital (Part 3 of 4)

In 1995, the US Congress got fed up with the inaction on the issue of recognizing Jerusalem as the capital of Israel. Our Presidents kept kicking the can down the road, and our State Department was (and still is) dominated by Arabists who had no interest in urging the recognition of Jerusalem and the move of our embassy. So, on October 23, 1995, Congress passed the Jerusalem Embassy and Relocation Act, calling for the relocation of our embassy to Jerusalem no later than May 31, 1999.12

The act called for Jerusalem to remain an undivided city and for it to be recognized as the capital of the State of Israel. The vote in favor of the law was overwhelming. It was adopted by the Senate 93 to 5, and by the House, 374 to 37.13 The act provided that, beginning in October 1998, the president could suspend recognition and the move of the embassy by signing a waiver every six months saying “such suspension is necessary to protect the national security of the United States.”14

President Clinton refused to sign the bill, but he was also reluctant to veto it. He allowed it to become law without his signature. He and his State Department considered the law to be an unconstitutional infringement of the president’s right to conduct foreign policy. Subsequent presidents and their counselors felt the same way. It is interesting to note that of the 22 presidential suspensions between 1988 and the fall of 2009, only George W. Bush’s issuances included the following wording: “The Administration remains committed to beginning the process of moving our embassy to Jerusalem.”15

Presidential Reluctance vs A Spiritual Reality

In addition to their constitutional objections to the law, our presidents (both Democrat and Republican) have believed that the recognition of Jerusalem as Israel’s capital would endanger the peace process. This fear is, of course, an unfounded one since there has never been any credible “peace process” in the Middle East.

What our political leaders have failed to understand is that the Israeli-Arab conflict is not a political one capable of a political solution. It is, instead, a spiritual conflict that can be traced back 4,000 years to the time of Abraham when his family split between the descendants of his two sons, Ishmael and Isaac. This is a conflict that will be resolved only when Jesus, the King of kings, returns to rule over all the world from Jerusalem. 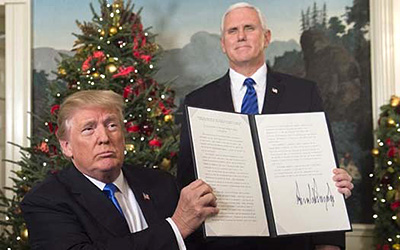 President Trump displays his recognition of Jerusalem document with Vice President Pence standing in the background.

President Trump’s proclamation was preceded by a unanimous resolution passed by the Senate on June 6, 2017, commemorating the 50th anniversary of Israel’s reoccupation and unification of Jerusalem in the Six Day War of 1967.16

That resolution, which was sponsored by both the Republican and Democrat leaders of the Senate (Mitch McConnell and Charles Schumer), reaffirmed the Jerusalem Embassy Act of 1995, which stated that Jerusalem should remain a united city and should be recognized as the capital of the State of Israel, with the US Embassy located there.17

Reaction to Trump’s bold move came quickly from around the world:

The United Nations — Predictably, the Secretary-General of the UN, Antonio Guterras, stated that, “Jerusalem is a final status issue that must be resolved through direct negotiations between the two parties…I want to make it clear: there is no alternative to the two-state solution. There is no Plan B.”18 The entire UN followed suit on December 21, 2017, by passing a General Assembly non-binding resolution that condemned Trump’s recognition of Jerusalem. The vote was 128 to 9. Thirty-five nations abstained and 21 did not vote.19

Ayman Odeh — The Israeli-Arab political leader of the Arab List in the Israeli parliament, declared. “Trump is a crazy pyromaniac who is capable of setting the entire region on fire with his madness.”20

Theresa May — The British Prime Minister provided a typical bureaucratic response when she characterized Trump’s move as “unhelpful to peace in the region.”21

Emmanuel Macron — The new Prime Minister of France dismissed the announcement as “a unilateral decision.”22

The Arab League — Convened three days later in Cairo and denounced the decision, calling it “dangerous and unacceptable” and a “flagrant attack on a political solution.”23 They proceeded to call upon the nations of the world to recognize the State of Palestine and East Jerusalem as its capital. (East Jerusalem includes the Old City, which is the location of the Temple Mount and the Western Wall.)

Israel Rabbis — A group of 250 Israeli rabbis sent a letter to President Trump thanking and praising him for his decision. Specifically, they said, “We are confident that you will be remembered in the history of the Jewish people forever as one who stood at the forefront and was not afraid. May God’s promise to Joshua be fulfilled upon you: ‘Did I not command you, be strong and have courage, do not fear and do not be dismayed, for the Lord your God is with you wherever you go.'”24 Rabbi Asaf Fried, an official spokesman for the United Temple Mount, saw Trump’s action as similar to the role played by the Persian king, Cyrus, who ended the Babylonian exile and helped with the building of the Second Temple.25

The Palestinian Authority — Mahmoud Abbas, the President of the PA, denounced the decision, saying that it would motivate extremist groups to wage holy war.26 The chief Palestinian negotiator, Saeb Erakat, said Trump’s decision “disqualified the United States to play any role in any peace process.” He added, “President Trump just destroyed any policy of a two-state solution.”27

Recep Erdogan — The President of Turkey said his country would not tolerate the recognition of Jerusalem as Israel’s capital. “Jerusalem is our red line. Any steps against Jerusalem’s historic status and holiness are unacceptable.”28

Benjamin Netanyahu — The Prime Minister of Israel received the President’s proclamation with great joy and appreciation, saying, “The President’s decision is an important step toward peace, for there is no peace that doesn’t include Jerusalem as the capital of the State of Israel.” He then added, “President Trump has inscribed himself in the annals of our capital for all time. His name will now be linked to the names of others in the context of the glorious history of Jerusalem and our people.”29

For over two decades American presidents have talked the good talk on Israel. But when it’s come to taking action, they’ve hesitated…instead of standing with our ally and recognizing its right to call Jerusalem its capital. Today, President Donald Trump did what his predecessors didn’t have the courage to do…In so doing, he set two great examples for us — how to make good on promises and how to treat your friends.

Robert Jeffress — Pastor of First Baptist Church in Dallas, Texas, and a Trump spiritual adviser, issued a statement that read:31 Jerusalem is and should be recognized as the capital of Israel. It is David’s capital, the site of the first and second temples, the focus of the historians’ accounts, the psalmists’ songs and the prophets’ visions. It is the place where Jesus, a Jew Himself, was crucified and where He was resurrected. It is the place where He will set foot again on earth at His Second Coming. President Trump has demonstrated true leadership today by recognizing Jerusalem as the legitimate capital of Israel. President Trump is a modern-day profile in courage.

In the fourth and last segment of my analysis of President Trump recognizing Jerusalem as Israel’s capital, we’ll examine the biblical support.

29) United with Israel, “Netanyahu: ‘Trump has Inscribed Himself in the Annals of Our Capital,'” December 10, 2017, https://unitedwithisrael.org/netanyahu-trump-has-inscribed-himself-in-the-annals-of-our-capital.