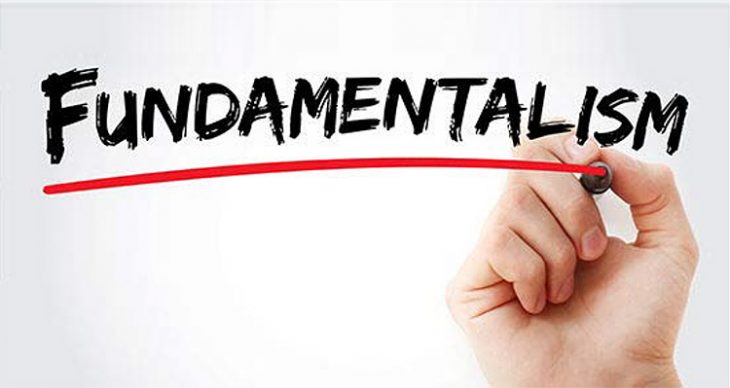 [Note: The illustration above was taken from an Internet article titled, “The New ‘F’ Word.” The author’s point is that the term is now used in a derogatory manner to insult Bible-believing Christians. (www.rforh.com/resources/live-it/random-thoughts/new-f-word)]

I recently received a message from a man who strongly suggested that I be more subtle when expressing my doctrinal views. He warned that I am coming across as a “literal fundamentalist.”

The Origin of Fundamentalism

The concept of being a Fundamentalist Christian goes back to the early 20th Century when the German School of Higher Criticism hit our Christian seminaries in America like a bomb. This form of liberal theology taught that the Bible is a product of Man and not God, and that it is therefore full of myth, legend and superstition. Those who responded the strongest against this nonsense were labeled “Fundamentalists.”

Unfortunately, over the years, Fundamentalists took on a very strident tone. Instead of just standing for the fundamentals of the faith, they began to draw lines of fellowship over doctrinal issues that were a matter of opinion. Even worse, they began condemning anyone who differed with them on anything. For example, many Fundamentalists started condemning to Hell anyone who would have the audacity to use any version of the Bible other than the King James.

Their liberal opponents began to characterize Fundamentalists as “redneck hicks from the sticks” who were too unsophisticated to understand the true meaning of the Bible. These attacks only motivated the Fundamentalists to become even more abusive in their counter-attacks.

That’s where Billy Graham entered the picture in the late 1940s. He decided to carve out a middle ground that would stand against both Liberalism and Fundamentalism. His position came to be called the Evangelical Movement. It provided a much more intellectual and reasoned response to the Liberals. It also avoided the pejorative language of the Fundamentalists.

Evangelicals distinguished between the essentials of the faith and the areas where there should be freedom of opinion. The essentials are usually defined as:

When a Christian leader denies one or more of these fundamentals, his ministry should not be respected or supported, and it can be legitimately considered as apostate. Disagreements over other points of doctrine are important, but they should never serve to disrupt our fellowship in the Lord. Truth is important, but not all truth is equally important. So, for example, whatever the truth may be about the Millennium, it is nothing compared to THE TRUTH that Jesus is Lord.

The Erosion of Evangelicalism

Unfortunately, over the past 20 years, the term, Evangelical, has lost its meaning. That’s because there are people now who call themselves Evangelicals who are denying the fundamentals of the faith. For example there are leaders in what is called the Emergent Church Movement who deny that Jesus is the only way to God. Yet these leaders refer to themselves as Evangelicals!

Some of these same leaders no longer look to the Bible as the source of their beliefs, something that has always been a hallmark of Evangelicalism. The result is that we now have Evangelicals who are denying the existence of Hell, who are endorsing homosexuality and same-sex marriage and who are questioning the inerrancy of the Scriptures.

Because the word, Evangelical, has lost its meaning, I no longer use that word to refer to my theological position within Christianity. Instead, I call myself a “Bible-believing Christian.”

Tragically, the number of Bible-believing Christians in America has receded to abysmal numbers. The latest Barna polls show that, only 9% of American adults have a biblical worldview, and only 19% of those who claim to be born-again Christians have such a viewpoint. That means that 80% of those who claim to be born again do not have a biblical worldview!

This, of course, is due to the fact that so many of our churches are more interested in entertaining people than in grounding them in the faith.

Yes, I am a “literal fundamentalist” but I avoid the term because it connotes a person who thinks he knows it all, who is dogmatic about his views, and who draws lines of fellowship over matters that are not essentials of the faith.

I will just settle with being a Bible-believing Christian. What about you?

Apologetics   Apostasy in the Church   Church and Ecclesiology   Interpretation of Scriptures