Remembering a Glorious Day in the History of Israel 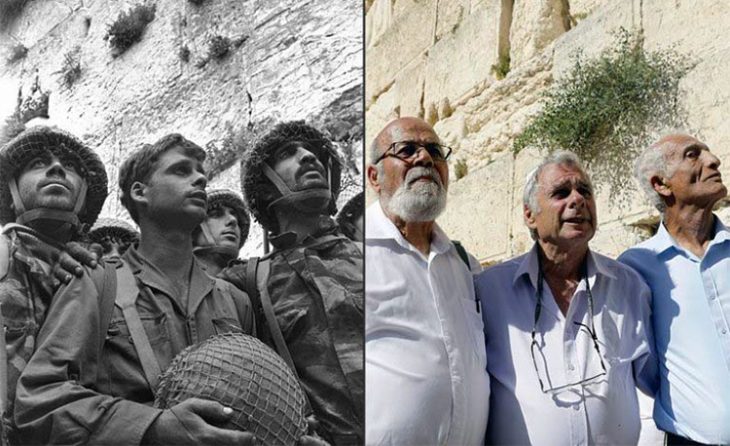 51 years ago, on June 7, 1967, Israeli soldiers broke into the Old City of Jerusalem and made their way to the Western Wall where the photograph on the left above was taken by David Rubinger. It has become one of the iconic pictures of modern day Israeli history.

Last year, on the 50th anniversary of the event, the three men in the photograph came back to the Western Wall to be photographed together. They are, from left to right, Zion Karasenti, Yitzhak Yifat and Chaim Oshri. At the celebration ceremonies, Zion Karasenti, now 74, proclaimed, “We will never give back Jerusalem.” He added, “If anyone tries to capture it again, the three of us will be in the front line!”

When the young Jewish soldiers broke into the Old City through the Lion’s Gate, they found themselves in the Arab Quarter, and they had no idea how to get to the Western Wall. But they were determined. While dodging bullets from snipers, they made their way through the labyrinth of confusing streets until they found the Wall.

At that time the space in front of the wall was like a narrow alleyway, only about 12 feet wide. The wall itself stretched 90 feet in length.

People often ask, “What is the Wall and why is it considered so sacred?” The Wall is part of a retaining wall that was built around the Temple Mount by Herod the Great. The reason it became sacred is because it is the closest place that the Jews can get to where the Temple was located on the mound at the top of the Wall.

After the liberation of Jerusalem in 1967, the area in front of the Wall was cleared of buildings, producing a huge plaza that will hold thousands of people. The Wall was also divided into male and female sections since it is considered to be a place of worship, and the Orthodox require separate seating for men and women in their synagogues.

On the day of its liberation, the chief rabbi of the Israeli army, Shlomo Goren, blew a shofar and announced, “We have taken the City of God. We have entered the Messianic era!”