Major Political and Theological Myths About Israel (Part 2 of 6)

The media is loaded with these myths about Israel, and they have proved to be very effective in generating worldwide hatred toward the Jewish people and their state.

1. The first is that the Jewish people have no claim to the land of Palestine.

In response to this myth, I think I should begin by pointing out that the word, Palestine, is not a biblical word. You will not find it anywhere in your Bible except as a label on maps in the back of your Bible.

That label is totally incorrect. What came to be called Palestine was the land of Israel for over 1,500 years — the period of the biblical judges and kings. The land did not become known as Palestine until after the Romans destroyed Jerusalem in 70 AD and began to disperse the Jewish people worldwide.

The word, Palestine, is derived from the Roman word for Philistines. So, to humiliate the Jewish people, the Romans renamed the land after their enemy.

Now, as to whether or not the Jews have any rightful claim on that land, the answer is absolutely yes!

The Biblical Right to the Land

The God of the Jewish people is the One who created the universe, and Psalm 24:1 says He owns all of it. He therefore has the right to give any part of this earth to whomsoever He pleases.

And it pleased God to give a large section of the Middle East to the Jewish people. This gift occurred 4,000 years ago when God appeared to Abraham and gave him and his descendants a land grant as pictured below, stretching from the Mediterranean Sea to the Euphrates River (Genesis 15:18- 21). 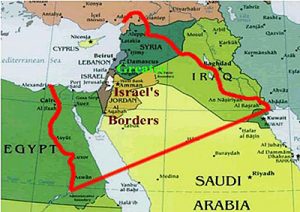 This is a land grant that has never been fully realized, but will be during the Millennial reign of Jesus. A small portion of this grant is what is currently referred to as Palestine. At the time that Abraham was promised the land, the area was called “The Land of Canaan.”

The initial promise of this land to Abraham and his descendants was specified in general terms in the Abrahamic Covenant contained in Genesis 12.

1) The LORD said to Abram, “Go forth from your country… to the land which I will show you;

2) And I will make you a great nation, and I will bless you, and make your name great…

7) To your descendants I will give this land.

1) Oh give thanks to the Lord…

8) For He has remembered His covenant forever…

9) The covenant which He made with Abraham, and His oath to Isaac,

10) Then He confirmed it to Jacob… and to Israel as an everlasting covenant,

11) Saying, “To you I will give the land of Canaan as the portion of your inheritance.”

The fact that the Jews were dispersed from the land for 1,878 years — from 70 AD to 1948 — does not in any way mean that God invalidated their deed to the land. For, you see, God had a second covenant with the Jewish people concerning their land.

In the Land Use Covenant God told the Jewish people that their enjoyment of the land would be dependent on their obedience to His Word — if faithful, blessings; if unfaithful, curses.

And He made it clear that if they became disobedient and persisted in that disobedience, the ultimate judgment He would place on them would be exile from the land. But the land would still belong to them. Let me illustrate this:

Suppose you give your teenage son a car and put the title in his name. But you make it clear that as long as he is living at home, under your authority, there will be rules for using the car. If the rules are broken, depending on the seriousness of the offense, the car will be locked up in the garage for a period of time. The car will still belong to the teen, but the enjoyment of it will be lost.

The crucial point here is that although the Jewish people were dispersed from their land in discipline, they were not dispossessed of their land. The title to the land remained in their name.

Political Right to the Land

Now, the world, of course, could care less about the Jews’ biblical and eternal title to the land. So let’s take a look at their right to the land from a political and legal standpoint. The fact that they have a legal right to the land can be easily established.

In November of 1947, the United Nations officially and legally authorized the creation of the modern state of Israel.

Prior to that time the land had been a League of Nations Mandate, established after World War I. Britain had been entrusted with this Mandate, the purpose of which was to prepare the people living in the area for ultimate self-rule.

In 1947, when the British announced that they were ready to surrender the Mandate, the United Nations approved a division of the land between the Jews and the Arabs. That division is illustrated in the map below. The three light orange areas were to be the Jewish state; the three purple areas, the Arab state. Jerusalem was to be internationalized. 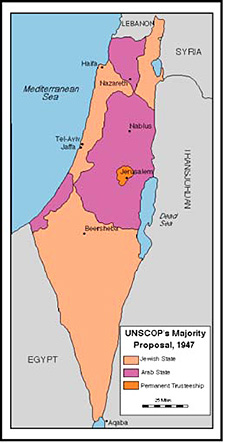 The Jews reluctantly accepted the proposal and proceeded to establish their state. The Arabs refused to accept the UN action and resorted to war.

No one can truthfully claim that the Jews have no right to the land. It belongs to them both biblically and legally.

In the third part of this series on the myths regarding Israel, we will look at the myth which claims the Palestinians were evicted from their state by the Jewish people.