Major Political and Theological Myths About Israel (Part 6 of 6)

7. The seventh and final myth I want to address is the most important one that the Palestinians and their allies are using today to rally world public opinion against Israel. It is the one being used on our college and university campuses to enlist young Americans against Israel. I’m speaking of the myth that Israel is an Apartheid state.

For those of you who might not be familiar with the term, Apartheid, let me pause to explain that it was the term used to describe the policy that prevailed in South Africa for many years that required the strict separation of races.

This claim against Israel is a classic example of the truth espoused by Hitler’s propaganda minister, Joseph Goebbels, who said, “If you tell a lie big enough and often enough, people will believe it.”

Israel has 1.7 million Arabs living within its borders. They are not separated from Israelis in any way. They enjoy complete citizenship rights, including the right to work with unemployment, medical and welfare benefits. They also have the right to vote — even the right to serve in the Israeli Parliament. There is no segregation in Israel in its theaters, buses, hotels or any other place.

The only way Arab citizens of Israel are treated differently is that they are not required to serve in the military, whereas Jews are required to do so — both men and women.

Well, I hope you are getting a clear picture of what hogwash it is to accuse Israel of Apartheid. Yet, the world’s political leaders continue to make the claim like mindless zombies.

The only Apartheid that can be found in the Middle East is in the Arab nations which will not even tolerate a Jew living within their boundaries. Yet these are the very hypocrites who shout the loudest about Israel being an Apartheid nation!

Yet, many American denominational leaders have bought this myth — hook, line and sinker. And that’s because they are either completely deluded, or else they are motivated by anti-Semitism, and therefore they want to believe a lie. 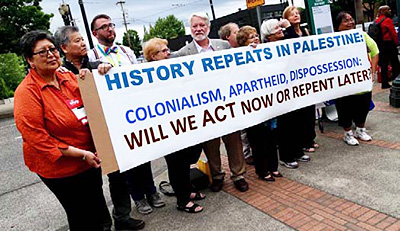 The only other political myth about Israel that comes to mind is the allegation that Israel is the major obstacle to peace in the Middle East.

That absurdity can be dismissed quickly with one observation from Israeli Prime Minister, Benjamin Netanyahu — an observation that cannot be denied:

“If the Arabs would disarm, there would be peace in the Middle East. If Israel were to disarm, Israel would cease to exist.”

There are, of course, other myths that could be discussed, and Satan is motivating the creation of new ones all the time. But Satan is going to lose this battle big time.

God is on His throne. He is in control. He has the wisdom and power to orchestrate all the evil of Satan and Man to the triumph of His will in history. “He who keeps Israel neither slumbers nor sleeps” (Psalm 121:4).

And He’s also laughing because the day is fast approaching when He will unleash His fury and pour out His wrath by sending His Son back to reign over all the earth from Mount Zion in Jerusalem.

And on that glorious day when Jesus returns to the Mount of Olives in Jerusalem, the Jewish remnant will repent and cry out: “Baruch Haba B’Shem Adonai!” (Blessed is He who comes in the name of the Lord!).