Major Political and Theological Myths About Israel (Part 5 of 6)

5. The fifth myth I want to take a look at is the assertion that Jerusalem is the historic capital of the Palestinian people and is the third most holy site in Islam.

This is what President Trump would call “fake news.” I call it “baloney.” The truth is that Jerusalem has never been the capital of any nation except Israel. Period!

When David conquered the city 3,000 years ago, it was a tiny rural Jebusite village. It was made the capital of Israel and served in that capacity for more than a thousand years.

It has never been the capital of any other nation — none! The Roman capital of the Holy Land was Caesarea Maritime. The Crusader capital was the port city of Akko. The capital of Palestine during the 400 years of Ottoman rule was Istanbul.

The mythical claim that Jerusalem is the third most holy site of Islam, after Medina and Mecca, is a manufactured political ploy to make an unjustified claim on the city.

The Muslim claim to Jerusalem is based on the legend that Muhammad rode his flying horse to the Al Aqsa Mosque in Jerusalem where he was taken up into Heaven for a visit. They base that claim on a statement in the Quran that says that Muhammad rode his horse to “the farthest mosque.” That was a mosque located in Saudi Arabia that went by that name.

The passage in the Quran could not be referring to the Al Aqsa Mosque on the Temple Mount in Jerusalem, as Muslims now claim, because it did not even exist during Mohammad’s lifetime! Mohammad died in 632 AD. The Al Aqsa Mosque was completed in 706 AD, 73 years after Mohammad’s death.

6. The sixth myth I would like to highlight is the assertion that for 70 years, Israel has been preventing the right of the Palestinian people to create a state for themselves.

The first thing to consider here is the absolutely irrefutable fact that the Palestinians already have a state!

It is called Jordan.

In 1921, Winston Churchill, acting as the British Colonial Secretary, issued a declaration in which he granted two-thirds of Palestine to the Arabs, creating a state called Transjordan, which today is simply called Jordan. He did this to curry the favor of the Arabs due to the large oil reserves that had been discovered in Arab lands.

This left the Jews only a small sliver of land 260 miles long by 70 miles wide located along the Mediterranean coast. They felt betrayed, but they swallowed hard and began looking forward to the day when they could convert that sliver of land into the state of Israel. 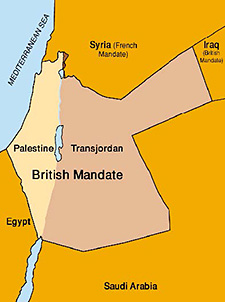 But then, in November 1947, the UN voted to divide the sliver into two states — one for the Jews and one for the Arabs, thus creating a second Palestinian state.

Once again, the Jews felt betrayed, but they accepted the UN resolution and established their state in May of 1948, when the British ended their League of Nations Mandate over the land.

Instead, they encouraged the five Arab states that attacked Israel because they wanted all the land, and they did not want a Jewish state of any size in their midst.

So, on the very day that Israel celebrated its 70th anniversary in 2018, the Arabs could have been celebrating the 70th anniversary of their state. They have no one to blame but themselves.

Nor was 1948 their only opportunity to establish a state. They have had several opportunities, one of which was in the year 2000 at the Camp David Conference that President Clinton convened. At that conference, President Clinton convinced Ehud Barak, Israel’s most liberal Prime Minister in its history, to agree to 95% of the Palestinian demands.

When these incredible concessions were made, Yasser Arafat’s response was to get up from the negotiating table, walk out of the room, fly back home and start the First Intifada, or Palestinian uprising.

Why? Because he knew if he agreed to any compromise with Israel, he would risk his life. And furthermore, the Palestinian demands were nothing but window dressing for what they really want, which is the annihilation of Israel.

The best summary I have ever heard of the long, sordid history of Palestinian leadership is the one phrased by Abba Eban, Israel’s articulate ambassador to the UN from 1949 to 1959. He said, “The Palestinians have never missed an opportunity to miss an opportunity.”

Even some Arab leaders are getting fed up with the Palestinians. For example, the Saudi Crown Prince, Mohammad bin Saliman, recently said:

For the past 40 years, the Palestinian leadership has missed opportunities again and again, and have rejected all offers it was given. It’s about time that the Palestinians accept the offers and agree to come to the negotiating table — or they should shut up and stop complaining.

In the sixth and last part of this series on the myths regarding Israel, we will look at the myth which claims that Israel is an Apartheid state.