There are a great variety of opinions in response to this question, due mainly to the fact that the 20th Century contained many stupendous events. When I Googled the question, I was presented with many lists. Some of the events that were mentioned on almost every list were the following:

I noticed that many, if not most, of the events that were identified as the most significant were dependent upon prior developments that were often more important. Consider, for example:

The Most Important Event From the World’s Viewpoint

The event that was named on the Google lists more than any other as the most important event of the 20th Century was the dropping of the atomic bomb on Hiroshima, Japan in August of 1945. But this event was also dependent upon many theories, experiments and tests that preceded it. Here is a list of some of them:1

This intriguing historical process of discovery culminated on December 2, 1942, at 3:25pm, when the first artificial nuclear reactor produced the first human-made, self-sustaining nuclear chain reaction. The scientist in charge was an Italian-American, Enrico Fermi (1901- 1954).5

This momentous event took place on a squash court located under the bleachers of Stagg Field — the University of Chicago’s abandoned football stadium. It was an incredible accomplishment which marked the advent of the Nuclear Age. 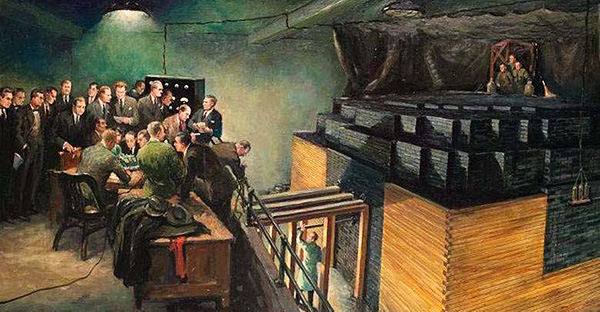 This illustration depicts the scene on December 2, 1942, under the west stands of the University of Chicago’s abandoned Stagg Field, where scientist Enrico Fermi and his colleagues achieved the first controlled, self-sustaining nuclear chain reaction. (Chicago Historical Society).

One of the persons present, University of Chicago physicist, Samuel K. Allison (1900-1965), wrote at the time: “All of us knew that with the advent of the chain reaction, the world would never be the same again.”6 Secretary of War, Henry L. Stimson (1867-1950), called the chain reaction “the greatest achievement of organized science in history.”7

In the second part of this look at what the greatest event of the 20th Century was, we’ll explore the possibility that the event was the advent of the atomic bomb.

Signs of the End Times   Technology   United States of America