In August of 1939, three years before the first artificial nuclear reactor produced the first human-made, self-sustaining nuclear chain reaction, two Hungarian-born physicists, Leo Szilard (1898-1964) and Eugene Wigner (1902-1995), drafted a letter to send to President Franklin Roosevelt in an attempt to warn him of the potential development of “extremely powerful bombs of a new type.”8 They had it signed by Albert Einstein in order to make sure it came to the President’s attention. The ploy worked, and on October 9, 1941, President Roosevelt approved the establishment of a crash program to develop an atomic bomb.9

This decision led to the creation of what came to be called “The Manhattan Project.” General Leslie Groves (1896-1970) of the Army Corps of Engineers was put in charge of overseeing the project. Dr. Robert Oppenheimer (1904-1967), a theoretical physicist at the University of California, Berkeley, was appointed the scientific director.10

To maintain a high degree of secrecy, the central headquarters of the project was located in the mountains of a remote region of northwest New Mexico, at a site called Los Alamos. The specific location of the project and its residents was concealed by designating its mailing address as a post office box in Santa Fe. Babies born in Los Alamos were designated on their birth certificates as being born in Santa Fe. Residents were told to call the town “Site Y” or “The Hill.” There were many more locations across the nation — from Washington State to Alabama — where various aspects of the project were housed. But the key core of scientists were at Los Alamos.11

The pressure to develop the bomb was intense. There were fears that the Germans might succeed first, and there was the desire to use the weapon to bring a quick end to World War II. But the technical problems were overwhelming. Nonetheless, as 1945 began, the scientists could see the light at the end of the tunnel.

In early May of 1945, it was decided that there needed to be a test explosion of TNT in order to obtain parameters for evaluating the force of the atomic bomb when it was exploded. Accordingly, on May 7, a stack of 108 tons of TNT was placed on top of a 20 foot tower and exploded. This is the reason that the force of atomic explosions since that time have been expressed in tons of TNT.12

This TNT test explosion was conducted at the same site that had been selected for the detonation of the first atomic bomb — a very remote location in New Mexico in the midst of the Jornade de Muerto Desert (“Day of Death”). The exact site was about 50 miles southeast of Socorro and 130 miles south of Albuquerque. Today, this site is at the north end of the White Sands Missile Range. The site was given its name, Trinity, by Oppenheimer. He later claimed that the idea for the name came from a poem by John Donne.13

As the day neared in July for the atomic bomb test, the scientists set up a betting pool as to how powerful the explosion would be. The bets ranged from the bomb being a dud to speculation by Edward Teller (1908-2003) that it might ignite the atmosphere and destroy the planet. Among those who guessed a specific number, the one who came the closest to the bomb’s actual power was an American physicist, I. I. Rabi (1898-1988), who took the number of 18 kilotons because it was the last available wager left in the pool. The team of theoretical physicists guessed a yield of between 5 and 10 kilotons of TNT.14

The bomb itself was nicknamed “The Gadget.” It was exploded at 05:29:21 on the morning of July 16, 1945. The power was determined to be 22,000 tons of TNT (or 22 kilotons). A total of 425 people were present, most of them housed in bunkers. All seemed to be more impressed by the brilliant light of the explosion than its sound. 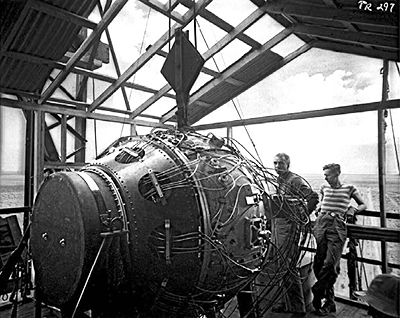 The roar of the shock wave was felt over 100 miles away. The mushroom cloud reached 7.5 miles in height and could be seen 200 miles away.15 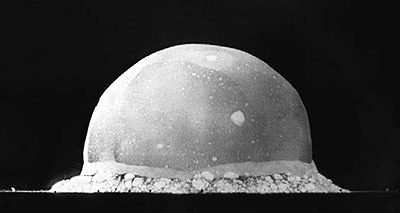 16 milliseconds after its detonation.
(https://www.atomicheritage.org/history/trinity-test-1945)

The Army issued a cover story in the form of a press release that said, “A remotely located ammunition magazine containing a considerable amount of high explosives and pyrotechnics exploded.”16 The true story was not released to the public until after the atomic bombs had been dropped on Hiroshima and Nagasaki in August. The Manhattan Project engineers and scientists did not visit the site until two months later in September.

The results of the test were sent immediately to Secretary of War Stimson who was with President Harry S. Truman at the Potsdam Conference in Germany. The coded message read: “Operated on this morning. Diagnosis not yet complete but results seem satisfactory and already exceed expectations.”17

So, what about it? Was this the greatest event of the 20th Century? Well, of course, that is debatable. But from a humanistic viewpoint, I would say that it was.

Why? Because of both its immediate and long term impact. Immediately, it resulted in the swift end to the greatest war in world history. In the long run, it changed international politics forever. And it provided mankind with the power to destroy all life.

Since that time, there have been 528 atmospheric nuclear tests and 1,528 underground tests, for a total of 2,056.18 There are currently a total of nine nations with nuclear weapons: the United States, England, France, Russia, China, India, Pakistan, North Korea and Israel.19

As of 1986, there were 70,300 active nuclear weapons in the world. Due to disarmament treaties, that total now stands at 13,890, but many of the decommissioned weapons were simply stored or partially dismantled, not destroyed.20

The Relationship to Bible Prophecy

The advent of the atomic bomb also has spiritual implications that are related to the prophecies contained in the book of Revelation. Although the Antichrist will rise to power peacefully in Europe, relying on his charisma and supernatural wisdom given to him by Satan, he will have to use military power to conquer the rest of the world.

Keep in mind that Africa, Asia and Latin America have spent the past two hundred years struggling to get out from under European colonial rule. These nations are not going to willingly submit themselves to a European dictator, no matter how charismatic he may be. And this will also be true of the Muslim nations in the South Asian areas of India, Pakistan, Bangladesh and Indonesia.

Thus, after the Antichrist establishes his power over Europe, he will launch World War III in order to fulfill the prophecy of Revelation 13:7-8, which says that he will ultimately gain “authority over every tribe and people and tongue and nation.” That war is pictured in the Seal Judgments of Revelation 6. It appears to be a conventional war in which one-fourth of humanity will be killed.

This is most likely what Jesus had in mind when He said that one of the characteristics of the end times would be “men fainting from fear… for the powers of the heavens will be shaken” (Luke 21:26). Also, a nuclear holocaust would explain why we are told that at the end of the Tribulation those still living will be covered with “malignant sores” — most likely from nuclear radiation (Revelation 16:2 & 11).

Before the advent of the Nuclear Age, we had to assume that the horrible judgments of Revelation could only be achieved through supernatural acts of God. Now, we realize that we can do these things to ourselves through an all-out nuclear exchange.

I believe the only reason nuclear weapons have not been used since World War II is because of God’s restraining hand. But during the Tribulation, He is going to step back, remove His restraints and allow evil to run its course. Unrestrained mankind will then proceed to destroy itself.

In the third and final part of this look at what the greatest event of the 20th Century was, we’ll marvel at how the Bible actually reveals the answer.