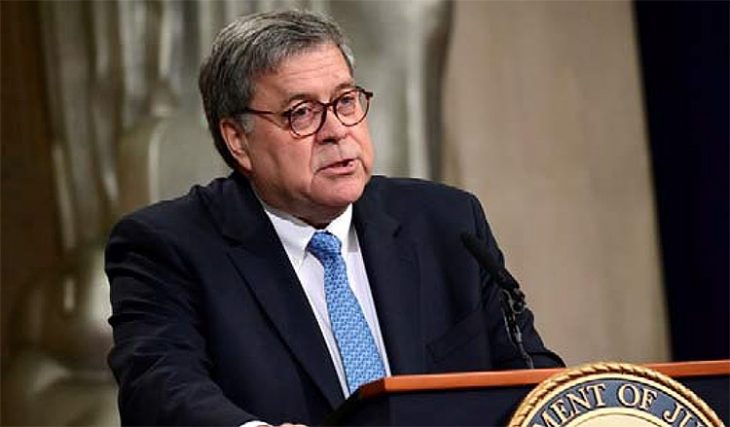 In October of 2019, Attorney General Barr, who is a Catholic, gave a remarkable address to the University of Notre Dame Law School.

It turned out to be a speech that caused the secular press to go into hysterics. The Washington Post called it “terrifying.” Paul Krugman at The New York Times denounced it because he said it “smacked of bigotry.” The ‘progressives’ attacked it savagely for several days.

What in the world did the Attorney General say that provoked such a strong reaction? Was it his defense of Trump? No, he didn’t even mention the President in the speech. His horrible trespass was to present a strong defense in behalf of religious liberty!

The ironic thing about these responses is that they proved one of the points that Barr made in his speech. when he said: “Secularists, and their allies among the ‘progressives,’ have marshaled all the force of mass communications, popular culture, the entertainment industry and academia in an unremitting assault on religion and traditional values.”

Barr began his remarks by observing that from the Founding Fathers onward, there has been a strong consensus about the centrality of religious liberty in the American experiment with representative government. As he put it, “The imperative of protecting religious freedom was not just a nod in the direction of piety.” Rather, it reflected “the Framers’ belief that religion was indispensable to sustaining our free system of government.”

He then pointed out that the challenge we face today in our society “is precisely what the Founding Fathers foresaw would be our supreme test as a free society.” Continuing, he observed:

They never thought the main danger to the republic came from external foes. The central question was whether, over the long haul, we could handle freedom. The question was whether the citizens in such a free society could maintain the moral discipline and virtue necessary for the survival of free institutions.

Barr emphasized that our Founding Fathers had a biblical view of mankind, realizing that human nature is basically evil. They recognized that one way of dealing with this inherent problem was to rely on the power and force of government to keep people in line. But this approach was unacceptable to them because they knew it would “inevitably lead to… tyranny.”

They were also aware that without some sort of restraint, the unbridled pursuit of personal desires would result in another form of tyranny — the enslavement of people to their appetites at the expense of the common good.

So, as Barr put it, “the Founders decided to take a gamble, which they called ‘the great experiment.'” It consisted of giving the people broad liberty while limiting the power of the government and placing trust in the self-discipline and virtue of the people to maintain law and order with dignity.

And it was at this point in his speech that Barr got into trouble. That’s because he proceeded to assert that the Founders believed that since mankind has an “infinite capacity to rationalize” evil, the moral values essential to the American system of government must not rest on human speculations, but “they must flow from a transcendent Supreme Being.”

This is exactly what our Founding Fathers believed, and Barr proved it with quotes from them. For example, he pointed to a statement by John Adams where he said:

We have no government armed with the power which is capable of contending with human passions unbridled by morality and religion. Our Constitution was made only for a moral and religious people. It is wholly inadequate for the government of any other.

How dare the Attorney General speak out in behalf of religion! The secularists were aghast. But Barr did not stop there. He proceeded to give the most powerful defense of religious liberty that has been spoken by a high government official in modern times.

He affirmed that our Founding Fathers were Christians who based their new form of government “on the Judeo-Christian moral system” that “corresponds to the true nature of man.” He then summarized that system as consisting of “two great commandments — to love God with your whole heart, soul and mind; and to love thy neighbor as thyself.”

“Modern secularists,” he declared, “dismiss this idea of morality as other-worldly superstition imposed by a kill-joy clergy. In fact, Judeo-Christian moral standards are the ultimate utilitarian rules for human conduct.” He added that those rules “are like God’s instruction manual for the best running of man and human society.”

The rest of his speech was a review of how religious liberty is under attack in America today and how determined he is to protect the religious liberty guaranteed by our Constitution. He summed up the current situation as one where “law is being used as a battering ram to break down traditional moral values and to establish moral relativism as a new orthodoxy.” He asserted that the problem is not that religion is being forced on others; “the problem is that irreligion and secular values are being forced on people of faith.”

Thank God for this man, and pray for him!