The Coronavirus Pandemic: Judgment of God or Whim of Nature? 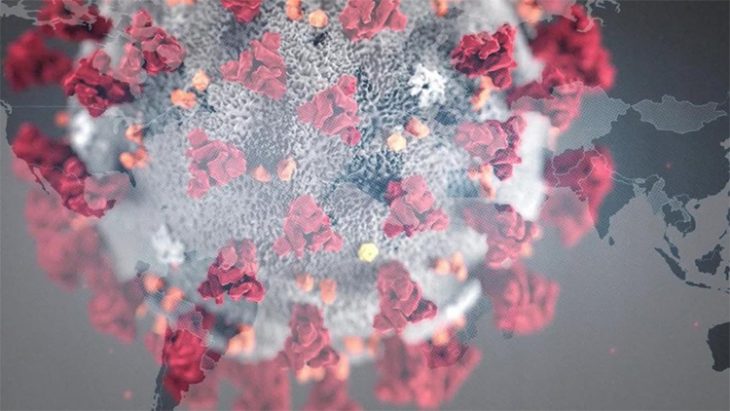 Serious Christians are grappling with an age-old dilemma in the midst of a global pandemic: Is this current pestilence a manifestation of God’s holy judgment or is it an inevitable outcome of natural processes?

If God is using a pandemic to execute judgment on wickedness, then surely mankind must repent. But if this outbreak of contagion is a purely natural evil, then there is no spiritual significance other than praying for relief and restoration. The stakes of understanding the spiritual dimensions of such a question could not be greater.

Wrathful Judgment or a Call to Repentance?

The thought that God would pour out judgment strikes many as hard to fathom. When God disclosed His plan of judgment against Judah by bringing the Chaldeans against them, the prophet Habakkuk incredulously responded that surely God did not mean to destroy the nation (Habakkuk 1:12)! It was beyond comprehension to the prophet that God would unleash forces that would result in the suffering and death of people whom He loved. But that is exactly what God declared and what happened. It was His response to unrepentant wickedness.

There is no doubt that Scripture records incidents when God declared judgment on kings and nations, allowing natural forces to become the means of that judgment. On occasion, even contagion and pestilence were the means of God’s disciplining lash.

For instance, when Pharaoh refused to let the Israelites go free, one of the ten plagues that befell Egypt was a pestilence that afflicted all the livestock of Egypt (Exodus 9:1-3,6). The next plague was an outbreak of boils and sores on man and beast (Exodus 9:10-11).

The Philistines also suffered a calamitous disease when they captured the Ark of the Covenant from Israel. Modern translations insinuate that rodents may have been a means of spreading the disease, but they lessen the specificity of the ailment. In the original texts, Scripture clearly indicates that the tumors and infections were localized in the private regions of the Philistine men (1 Samuel 5:9-6:4).

David also experienced an outpouring of judgment in the form of pestilence. The anger of God Almighty burned against Israel when David, in his pride, decided to number the people of Israel and Judah through a census that was not God-ordained. David later recognized the offense had exhibited a lack of faith in God’s providence. He confessed his sin and prayed for the LORD to “please take away the iniquity of your servant, for I have acted very foolishly” (2 Samuel 24:10).

The next morning, David was visited by the prophet Gad. He was offered three options: seven years of famine, three months of fleeing before foes, or three days of pestilence. Overwhelmed by the severity of the choices, David responded, “I am in great distress. Let us now fall into the hand of the LORD for His mercies are great, but do not let me fall into the hand of man” (2 Samuel 24:14).

The LORD indeed sent a pestilence that killed 70,000 men throughout the land. After three days, He stayed the hand of the destroying angel hovering near the threshing floor of Araunah the Jebusite, ready to destroy Jerusalem. Encouraged by Gad, David rushed to buy Araunah’s threshing floor and raised up an altar to the LORD. He offered burnt offerings and peace offerings. The LORD was moved by his prayer and the plague relented. 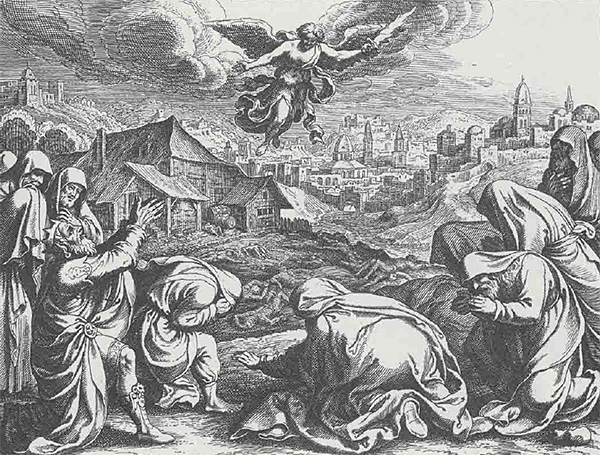 Woodcut of the Destroying Angel at the threshing floor of Araunah.

I share this level of detail because the Bible records that level of detail and more. It clearly ascribes God as the instigator of the plague and states unequivocally that it was unleashed as a judgment against David’s offensive sin. People who had no direct involvement in that originating sin suffered and died.

While there was an element of judgment in each of those incidents, God’s stated motive was to motivate repentance — a turning back from disobedience. That is always the case. God even warns when wrath is about to fall — in order to offer an opportunity for repentance and relenting. When caught in the maelstrom of such an outpouring of wrath, there is a temptation for men to shake their fist at heaven and curse God (Revelation 9:20-21). But, the writers of Scripture tell us that the proper response is to repent and cry out for mercy.

This aspect of undeserved suffering is not politically correct. It does even not sit well with our sense of justice. We would rather all suffering befall only those who are deserving, while those who are innocent remain unscathed. So powerful is this sentiment that it can lead to misguided theology and misplaced recriminations. In Luke 13, Jesus was told that Pilate had slaughtered some Galileans while they were offering sacrifices in Jerusalem. Knowing the inevitable assumptions in His listeners’ hearts, Jesus said to them:

Our hearts would cry out, “Yes!” We would ascribe terrible sinfulness on any who suffer such a fate, rationalizing that they must have deserved their suffering. Job’s friends made the same false assumption when they counseled him (Job 4:7; 8:3-4; 11:14). But Jesus dismissed that simple-minded analysis. Regarding both tragedies, He answered His own questions by saying, “I tell you, no…” But then He offered a key to understanding our own fate: “…but unless you repent, you will all likewise perish” (Luke 13:3,5).

Jesus was not suggesting that if we do not repent Pilate’s men will mix our blood with a sacrifice in Jerusalem, or a tower will fall on us in Siloam. Instead He stated the truth that John the Baptist also conveyed: from our very birth, the wrath of God abides on us (John 3:36). We are corrupted with sin in our innermost being. The reality is not that some sin grievously enough to merit punishment and wrath; we all deserve punishment and wrath. Because of Man’s sin and sinfulness, the entire creation was cursed by God (Genesis 3:17-19). To this day, all of the creation groans for the restoration that will come when Jesus comes and makes all things new again (Romans 8:19-23; 21:5).

The only way to avoid the wrath-filled destiny we deserve is to repent — turning from our sinful ways by confessing our sin and trusting in Jesus Christ as our Savior and Lord. Some preach a false gospel suggesting that God’s wrath simply evaporates in the face of such a response, but that is not true. The true gospel tells us that the wrath of God has already been poured out due to our sins and our sinfulness. But, instead of falling on each of us who believes in the Lord Jesus Christ, that terrible wrath fell on Him at the cross of Calvary. He suffered and died in our place. In the 53rd chapter of his book, the prophet Isaiah pre-recorded this eternal truth:

5) He was pierced through for our transgressions, He was crushed for our iniquities; the chastening for our well-being fell upon Him, and by His scourging we are healed.

6) All of us like sheep have gone astray, each of us has turned to his own way; but the LORD has caused the iniquity of us all to fall on Him (Isaiah 53:5-6).

The writer of Hebrews warns, “It is a terrible thing to fall into the hands of the living God” (Hebrews 10:31). If you have not put your faith in Jesus, the wrath of God abides on you. So when He comes to judge the living and the dead, He will either be your Blessed Hope or He will be your Holy Terror.

Without eyes to see or ears to hear, a committed atheist allows for no explanation beyond the material realm. Refusing to accept the reality of God, they instead personify “Mother Nature” and ascribe reason to amorphous evolutionary processes. And, because atheists deny any absolute beyond their own reason, they reject the very ideas of sin and judgment.

According to such a worldview, a virus is merely a part of nature. An annoying and destructive part, they’ll admit, but one with no more moral weight than a plant or a rock. Some extreme naturalists even perceive mankind as the greatest threat to an otherwise wholesome world. They assert that it is good and necessary for humans to be decimated from time to time.

Although it may seem extreme to convey the atheistic/naturalistic perspective so bluntly, there is no lack of testimony along these lines. Christians who allow themselves to be saturated with an evolutionary worldview become subtly infected with the idea that some natural forces are beyond God’s control. Through countless permutations of deceit, Satan has convinced the world that God is a liar whose Word is untrue.

Just consider how many self-proclaimed Christians practice a subtle form of idolatry. They do not believe God would allow anyone to suffer, and they therefore reject wrath as an outdated attribute too offensive to proclaim. So they worship a false god who never judges and never punishes. Those scoffers would be wise to heed the lesson of 2 Chronicles 36:15-16.

The LORD, the God of their fathers, sent word to them again and again by His messengers, because He had compassion on His people and in His dwelling place; but they continually mocked the messengers of God, despised His words and scoffed at His prophets, until the wrath of the LORD arose against His people, until there was no remedy.

So, is the current pestilence a specific judgment of God or is it a whim of nature?

Considering the growing sinfulness of the world and the mercy of God, the coronavirus pandemic is one of many judgments allowed by God to drive us back to Him. Instead of shaking our fist at God for allowing temporal harms to threaten and inflict us, our rightful response is to confess our sin and sinfulness, turn to Him in believing faith, and place all our trust in Jesus Christ.

Tim Moore: The #Coronavirus pandemic is one of many judgments allowed by #God to drive us back to Him. Click To Tweet

Anyone who believes in the God of the Bible must recognize that all of creation is subject to His will. Even when Satan was allowed to inflict Job, it was within the limitations imposed by God. And we know that God placed a curse on all of the creation following the Fall. That means that thorns and thistles, poisonous and carnivorous animals, cataclysmic storms and earthquakes, and microscopic bacteria and viruses now inflict mankind. The God-ordained natural order of our fallen world dictates that on this earth we will have trouble. Indeed.

But Jesus has overcome the world. He already suffered the full outpouring of the wrath of God and has won the victory over death. Every curse we experience in this life — to including pandemic viral outbreaks or Roman bloodbaths or falling towers — should drive us to repent, lest we likewise perish.

If you have discernment, you will heed the words of King David:

Worship the LORD with reverence and rejoice with trembling. Do homage to the Son, that He not become angry, and you perish in the way, for His wrath may soon be kindled. How blessed are all who take refuge in Him! (Psalm 2:11-12).