Does God Still Speak Through Signs of Nature? (Part 2 of 3)

The Nature of God

God has continued throughout history to use signs of nature to call nations to repentance. Some people say, “Oh no, God doesn’t do that anymore because this is the ‘Age of Grace.'”

Well, the first problem with that statement is that it implies there was a previous time of no grace. The fact of the matter is that there is only one way of salvation that has ever existed — namely, grace through faith (Joel 2:32).

Furthermore, the Bible says God is “the same yesterday, today and forever” (Hebrews 13:8). There is no such thing as the Old Testament God of wrath and the New Testament God of grace. God does not change (Malachi 3:6). He is immutable.

The Old Testament God of wrath is the One who showed grace toward the wicked city of Nineveh when its people repented in response to the message of Jonah. The New Testament God of grace is the One who warned the church at Thyatira that if it continued to tolerate a false prophetess, He would “cast her upon a bed of sickness and those who commit adultery with her into great tribulation.” Further, He threatened to “kill her children with pestilence” (Revelation 2:22-23).

Our God is a God of grace, mercy and love. But He is also a God of holiness, righteousness and justice. The balanced view of God is presented by the prophet Nahum. Speaking of God’s grace, he wrote: “The LORD is good, a stronghold in the day of trouble, and He knows those who take refuge in Him” (Nahum 1:7). But Nahum warned that the same God is One who is righteous and holy and who will not tolerate sin (Nahum 1:2-3):

A jealous and avenging God is the LORD;
The LORD is avenging and wrathful.
The LORD takes vengeance on His adversaries,
And He reserves wrath for His enemies.
The LORD is slow to anger and great in power,
And the LORD will by no means leave the guilty unpunished.

The Role of Satan

Some counter by trying to argue that natural calamities come from Satan and not God. But the Bible teaches that God is sovereign. Satan is not free to do anything he pleases. When he wanted to torment Job, he had to ask God’s permission, and when he was granted permission, God laid down rules about what he could and could not do (Job 1:6-12).

The Bible says God does not tempt us (James 1:13). Yet Jesus taught us to pray, “Lead us not into temptation” (Matthew 6:13). How can these statements be reconciled? The answer is that although Satan is the tempter, he cannot do so unless God allows it.

Again, God is sovereign, and nothing happens that He does not allow, either in His perfect will or His permissive will. That is the reason the Bible attributes all natural disasters to God.

Do all natural calamities represent remedial judgments of God? No — most are products of the natural processes of our weather systems.

How then can we determine when a natural calamity is a remedial judgment? One important factor is the timing of the event as it relates to the sins of the nation. Another factor is the magnitude of the event. Remedial judgments are designed to have great shock value in order to capture people’s attention and force them to think with an eternal perspective. The most important factor is God’s Spirit witnessing to the spirits of those to whom He has given the gift of prophecy. They will be motivated to speak forth with a united voice.

The Example of the United States

We can see all these principles operating in the history of our own nation. We were founded as a Christian nation, committed to Christian values, and God greatly blessed us. But in the 1960s, we began to thumb our nose at God as a cultural revolution was launched. Our society quickly descended into a cesspool of sexual promiscuity, drug abuse, abortion on demand, legalized gambling, rampant blasphemy and a flood of pornography. Our national slogan became, “If it feels good, do it!” We adopted a hedonistic lifestyle, calling evil good and good evil.

God responded by raising up prophetic voices to call the nation to repentance. One of those was Dave Wilkerson, pastor of Times Square Church in New York City. I call him “God’s Jeremiah to America.” In the 1970s he began writing a series of books in which he clearly outlined the sins of America and warned of judgments from God if we did not repent. Like Jeremiah, his popularity plummeted because people — even church people — did not want to hear his “doomsday message.”

When the prophetic voices were ignored, God began to place remedial judgments on our nation — things like our defeat in the Vietnam War, the AIDS epidemic, the plague of sexually transmitted diseases, the scourge of homosexuality and natural disasters in the form of monster earthquakes, killer tornados and hurricanes. We even experienced an unprecedented volcanic eruption of Mount St. Helens in 1980 — an eruption so severe that it blackened the sky from Seattle to New York City and as far south as Oklahoma. 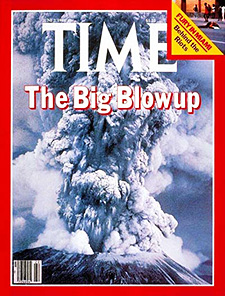 The culmination of the remedial judgments seemed to come with the 9/11 terrorist assault in 2001, when two symbols of American pride were attacked: the Twin Towers in New York and the Pentagon in Washington, D.C. The towers stood as symbols of our wealth; the Pentagon symbolized our military power.

As I have stated before, I believe this event was a wake-up call from God for our nation to repent. Instead, like a drowsy man who doesn’t want to wake-up, we merely rolled over and hit the snooze button on the alarm clock.

In the third and last part of this look at the signs of nature, we will explore mankind’s role in natural calamities.