Does God Still Speak Through Signs of Nature? (Part 3 of 3)

In Jesus’ Olivet Discourse, delivered to His disciples on the Mount of Olives during the last week of His life, He specifically spoke of signs of nature to watch for in the end times.

Matthew recorded Him saying, “…and in various places there will be famines and earthquakes…” (Matthew 24:7). Luke’s account of the same speech is more detailed. He quotes Jesus in Luke 21 as saying:

11)… there will be great earthquakes, and in various places plagues and famines; and there will be terrors and great signs from heaven…

25) There will be signs in the sun and moon and stars, and on the earth dismay among nations, in perplexity at the roaring of the sea…

We are witnessing all these things today worldwide. All sorts of weather calamities are happening more frequently and causing greater damage — hurricanes, tornados, earthquakes, floods and forest fires.

Additionally, famine continues to rage throughout Africa and other Third World areas. Plagues like AIDS, SARS, Ebola and COVID-19 continue to challenge and perplex medical science. A new danger is the return of old diseases thought to be under control — due to the development of antibiotic resistant strains.

And for the first time ever, we are living in a time when we can see incredible sights in outer space due to space telescopes and satellite probes which we have sent to other planets — all in fulfillment of Luke 21:25 which says that in the end times, “there will be signs in the sun, moon and stars…”

With regard to natural calamities, some simply dismiss them in a cavalier manner by asking, “What else is new?” But as I have already mentioned, Jesus said that the signs in the end times would be like “birth pangs” (Matthew 24:8), meaning they will increase in frequency and intensity. And that is what has been happening.

There’s a better way to look at natural disasters than to consider them by category, such as the frequency and intensity of tornadoes, for the number and intensity will go up and down from year to year, although showing an overall increase over a period of time. The best way to view natural disasters is to consider all of them grouped together. When you do that, the statistics show that they are rapidly increasing, from an average of 300 per year in the 1980s, to 490 per year in the 1990s, to almost 900 per year in the first ten years of this century.2

Let me illustrate what I mean: In 2012, our nation experienced one of its worst droughts in modern history — with over 61% of America affected. Now, one side effect of that drought is that we experienced the lowest number of tornados in 60 years — after all, you can’t have tornados without thunderstorms. The same was true of flooding.

The chart below illustrates the exponential growth of disasters worldwide. Ron Fraser, the author of the article that the chart illustrates, asserts: “The facts are that statistics prove natural disasters have risen startlingly since 1990.” 3 The Borgen Project (a non-profit organization focusing on world poverty), has labeled the increase in disasters worldwide as “skyrocketing.”4 The fact of the matter is that the severity and cost of the disasters have been rapidly increasing, and “record disasters are becoming commonplace.”5 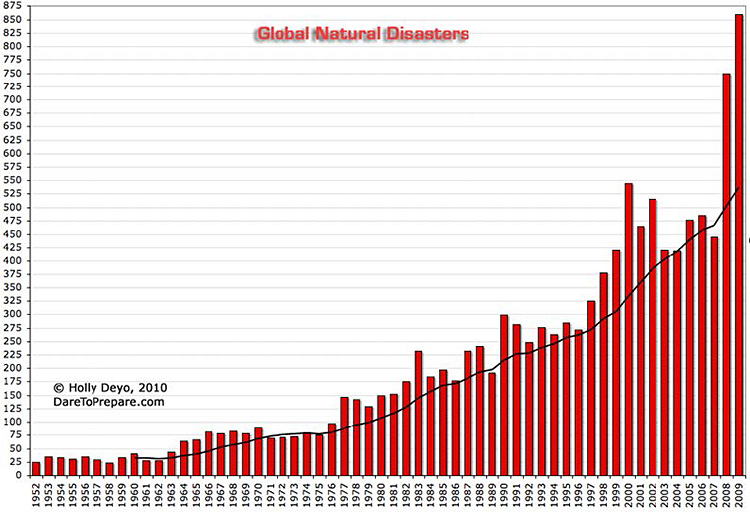 Fraser presents convincing arguments that 1989 was the watershed year — “a threshold from which natural disasters escalated most dramatically compared to past eras in history.”6

It seems rather obvious that God is shouting at us through increasing natural disasters that “Jesus is coming soon!” And yet, few seem to be getting the message — even those in the Christian community.

All of which reminds me of the cartoon below about how people in the time of the prophet Haggai seemed to ignore his warnings that the natural disasters they were experiencing were due to the fact that they were postponing the rebuilding of the Lord’s temple. 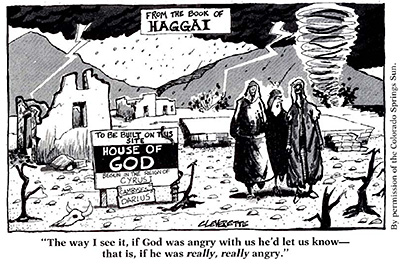 This leads to a frequently asked question: “What is the prophetic significance of ‘Global Warming?'”

The answer is that the whole concept is a political ploy which liberals are using in an attempt to gain greater control over society. The fact that it is a non-issue was pointed out brilliantly in a 2020 article by Jack Kinsella, a writer for Hal Lindsey.7

He observed that 96% of all greenhouse gases and other so-called global warming emissions originate naturally from the oceans that cover five-sixths of the earth’s surface. Thus, as he put it, “That leaves only 4% to divide up between human activity, volcanoes, rotting vegetables, cow flatulence, etc.” It is estimated that the human portion of that 4% is 14%, and 14% of 4% is .056!

Even the advocates of Global Warming have recognized the absurdity of their claim that humans are responsible for the earth’s warming. So, Global Warming has morphed into “Climate Change.” And, as Harold Ambler, writing for The Huffington Post has observed, “the term, Climate Change, is a redundancy because the climate has always changed, and always will.”8

For example, scientific studies have shown the following climate periods in world history:9

I feel compelled to point out that the Bible does prophesy that a super-hot time is coming when God will envelop the earth in fire to burn away the pollution of Satan’s last revolt, which will occur at the end of Jesus’ millennial reign. Out of that fiery inferno will come the New Earth, which will serve as the foundation for the New Jerusalem where the Redeemed will reside forever.

So, true global warming is on its way! But, more importantly, the Signs of the Times are screaming that we are on the threshold of the Tribulation. And that means, in turn, that Jesus is at the very gate of Heaven, ready to step out on a cloud and come for His Church.

Meanwhile, the Church needs to wake up to the Signs of Nature and all the other signs that are converging for the first time ever. But for that to happen, our nation’s pastors need to get serious about the fact that we are living in the season of the Lord’s return, and they need to start proclaiming that fact from their pulpits.

The Church needs to stop yawning and start yearning for the return of Jesus.